Homemade Worm bins are structures designed to make composts with the use of worms, a favorite of which are Red Wigglers(Eisenia Foetida). Worm composting or vermicomposting is totally different if you compare it to the traditional way of composting. Worm composting makes use of Red Wiggler worms as they are more commonly called; to feed on organic wastes and in the process, produce castings (a compost product used as mulch and is also odor-free) that can be utilized as a soil conditioner and topsoil additive. Your homemade worm bins are also home to natural organisms like millipedes and bacteria that aid in aerobic degradation of organic materials.

The Best Location for Worm Bins

Location is extremely important. It is ideal that you position your homemade worm bins in an environment where the surrounding temperature ranges at 40 to 80 degrees Fahrenheit. In line with this, most people place their worm bins in a small corner in their kitchen or they have it outdoors, but if they reside in an area where it gets really chilly during winter season, they find themselves a nice place indoors where they can situate their homemade worm bins, usually in their garage or basement.

How to Manage Your Worm Bins

Feeding your worms in your homemade worm bin brings all the joy in vermicomposting. Red Wigglers are intense feeders as they can eat up to as much as their own body weight everyday. A worm bin that has a pound of Red Wiggler composting worms in it can easily consume five pounds of grub per week. You can include all kinds of vegetables and fruits to their diet such as melon rinds, citrus fruits, wilted lettuce, carrot and potato peelings, etc. Coffee filter and grounds, tea bags and leaves, egg shells and pruning of house plants can also be used as their foods. Just remember not to over feed your precious worms on your homemade worm bin and never add fish, diary products, oils or meat in their diet. When you are giving them food, simply lift the bedding, set down the scraps and always remember to cover it up with moist bedding. Doing these prevent fruit flies from coming and also helps out in preventing that nasty odor.Red Wiggler worms as fishing worms are also excellent. 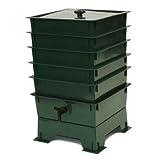 Placing Foods into Your Worm Bin

Place the food in alternate parts of the homemade worm bin. You do not need to frequently add water to it, but it is ideal that you check the bedding every couple of weeks and see to it that it does not completely dry out. In case the bedding becomes soggy, simply add more paper in it to dry it up a bit. In just a couple of months, you will see that the bedding in your worm bin is converted into vermicompost whish is great for organic gardening. You will now need to remove the material compost and add a new bedding. The most suitable method of doing this is to transfer the compost on one side of your bin and fill the other part with garbage and a new bedding. Wait for about a month for the red worms to migrate to the new material and now that you have that established, you can remove the compost and ultimately replace the bedding of your homemade worm composting bin. Another great method in harvesting your compost is to lay the compost on a plastic sheet and expose it to bright lights or sunlight. Worms technically do not fancy the light, so they will relocate themselves into the bottom of the pile. After just an hour or so, you can then remove the top part of the compost. Just repeat the whole process until you fully remove all the compost in your homemade worm bin.Do the same in any type of compost bins.