Choosing a metal cutoff saw can be a challenge, there are a lot of considerations and a lot of options. It is therefore important to think about how you are going to use your saw when you are making your choice so that you will get the one that is best for your needs.

cold saw and an

abrasive saw. Both are included in the reviews below so that depending on which one you decide is the best option you will be able to find best metal cutting chops saw for your needs.

If you are in need of a really good metal cutoff saw this is definitely the one to get. It is a dry saw which makes it ideal for making precise cuts. It is on the pricey side to be sure but it works great and is highly recommended. 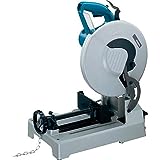 This is easily the best abrasive saw that I have tried and I would highly recommend it to anybody who needs to cut a lot of metal but is not prepared to invest in a cold saw.

Things I Didn't Like About the MK Morse CSM14MB

Should you Buy the MK Morse CSM14MB?

I really like this saw and I would highly recommend it. It is however a very expensive saw and I would imagine that a lot of people would have a hard time justifying the price which is the main reason that it is not ranked higher. For the professional user who will use it enough to justify the price it is definitely an option worth considering.