How to Grow Kohlrabi

Here in the U.S. Kohlrabi isn't a very popular or common vegetable unless you shop at a grocery store that carries a lot of ethnic vegetables. I recently bought a few Kohlrabi at my local grocery store and had several shoppers come up to me asking me what it was and how to prepare it. It is sad that this vegetable is so unknown. It has great flavor and can be used in several different ways. I'm just glad someone was asking about it! At least these few shoppers were willing to try something new!

A member of the Brassica family of vegetables (Broccoli, Cauliflower, Brussels Sprouts, Cabbage and Kale being some others), Kohlrabi is sometimes referred to as German Turnip or Turnip Cabbage.

These interesting, Dr. Seuss looking plants come in shades of pale green or purple and can be eaten raw or cooked. The bulb as well as the leaves are eaten in both German/Eastern European cultures and Indian (East Asian) cultures.

The flavor of the flesh is a cross between a mild broccoli stem and cabbage, with a sweet undercurrent. Raw, they have the texture and crunch like Jicama.

Whatever the case may be, Kohlrabi is most popular in German cooking, where is it commonly used in stews, soups and cream sauces.

Have you ever tried Kohlrabi ?

How to Grow Kohlrabi

Kohlrabi is super easy to grow from seed. Direct sow in the spring when temperatures have reached 50 degrees and around 7 to 8 weeks before the last frost date for your area. Sow seeds in full-sun 1/2 inch deep and 1 inch apart. It generally takes about 14 days to germinate, but can take a bit longer if daytime temps are too low or inconsistent.

Once they are germinated, they take about 55 to 60 days to mature. You will want to harvest when the bulbs reach no more than about 3 inches in diameter. If left to get bigger, the bulb will be more woody and bitter.

To harvest, use a knife and cut the bulb about an inch below the bottom. Store bulbs in the crisper drawer. They last about 3 weeks in the fridge. 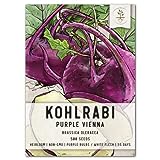 Slugs can be combatted easily by either hand-picking, putting copper wire around your plants or using a product like Sluggo.

Cabbage Moths are more of a problem in other brassicas i.e. Broccoli and Cabbage, but occasionally can be seen in Kohlrabi as well. They are green and hard to find unless you are specifically looking for them. They blend in well on the underside of leaves.

You have a few options to combat them; pick them off and smash them, use a chemical agent like BT if you have a heavy infestation or use a "home remedy" that some people swear by:

Crush and mince 3 cloves of fresh garlic in 2 tablespoons of olive oil, add 1 tablespoon of chili powder, and add to 1 gallon of water. Let sit for 24 hours or more. Put the mixture into a spray bottle and spray your plants. You will need to reapply the mix after a heavy rain. I have personally never tried this method, but others have with good results.

The bulbs of the Kohlrabi are actually the swollen stems of the plant.

The most common varieties available on the market today are the White Vienna and Purple Vienna*, which grow to a diameter of 2 to 3 inches. There are also some larger varieties; Grand Duke and Gigante, both grow to 5 inches in diameter or more.

*The purple varieties have the same cream colored flesh as the other varieties.

How to Prepare Kohlrabi

Despite it being in the brassica family, Kohlrabi is a very versatile vegetable because of it's mild flavor profile.

Peel the exterior skin with a knife of vegetable peeler. The skins are tough and not eaten.

Over the weekend, I made some tacos and wanted something crunchy and healthy to put on top, so I took some left-over Kohlrabi I had on hand and decided to make a slaw with it. It came out great and provided a nice crunch. It was a good substitute for Jicama.

Combine all ingredients in a bowl and chill in the fridge for at least an hour to let the flavors mingle. Serve as is or add it on top of tacos for an extra crunch!