Protecting the Table and Tablecloth with Flatware Rests, Coasters, and Placemats -A Historical Account

Flatware (knife, fork, and spoon) rests, coasters, and placemats were made for a similar purpose: to protect the table and tablecloth from food stains, spills, heat, other damages, and contaminants. Flatware rests are not seen as much today, but coasters and placemats are still fashionable.

Though it could have started out as a simple piece of wood used by 16th century aristocracy and their minions, historians believe that today’s knife rest was developed in the late 17th century or early 18th century. It was created in pairs or sets of even numbers perhaps, to accommodate other flatware on the dining table. By the time the extravagant Victorians came along in the 19th century, knife rests were being made from a host of different materials: silver, gold, crystal, ivory, glass, ceramics, stainless steel, pewter, and brass. They were also crafted in various sizes: large, small, long, or short. The ends were sculpted as people, animals, architecture, and other designs.

The French, Russians, and Germans joined the English in producing knife rests. The French called their version “porte couteaux” and the company Lalique was top of the line. Those made by the English company Wedgwood were also sort after. The knife rests craze continued through the mid-20th century before fizzling.

When forks became a flatware item, knife rests were no longer used exclusively for knives. History determined that forks were used as dining instruments by the Byzantine people in the 11th century, but the Greeks were the first to make them. Today fork/ knife rests are mainly collectible items with prices ranging from $9.00 to $2,000.00 plus.

Spoons were invented in “Old Stone Age” or Paleolithic times, some two million years ago. Spoon rests came much later to protect stove tops and countertops as well as tables and tablecloths from soilure and contaminants (in the case of stove tops and countertops especially). Today they are made from gold, silver, glass, metals, ceramics, or plastics, and come in all shapes, designs, and colors. But their appearance differs from knife/ fork rests. They are round, square, fruits, vegetables, leaves, or painted with art deco. There are individual spoon rests and multiple spoon rests, modern and antique. Modern spoon rests are usually microwaveable-safe and dishwasher-safe. Prices are $15.00 and higher. 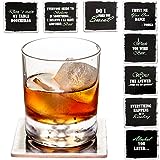 Coasters, also known as beermats, were created to capture the condensed liquids dripping from beverage holders – glasses, bottles, etc. They were developed in the 1880’s by the German printing company Friedrich Horn. They made them from disposable cardboard, and imprinted them with phrases, ads for alcohol, and other designs. In the 1890’s, beermats made from wood were introduced by another company. In the 1920’s, the Watney Brewery of the United Kingdom began using them to advertise their ale, according to the article “Beverage coaster” from http://en.wikipedia.org. The same article states that the now defunct German company Katz Group produced 75% of the world’s five billion plus coasters, 97% of which was for the United States market. It should be noted that two of their factories were located in the United States.

By mid-20th century, coasters for both home and restaurants were being made from various materials with different designs, shapes, and colors: cork, glass, metal, plastic, suede, leather, square, round, with/ without rims, art deco, photos -especially for weddings and other special occasions. Besides alcohol, those created for restaurants were imprinted with ads for sports teams, businesses, and even political content. Earlier-made coasters are now collectible items. Today’s prices range from 0.08 cents to over $200.00. 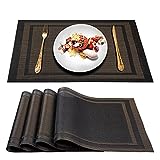 Placemats are basically pads created to protect the table or tablecloth from food and beverage stains, spills, heat, etc. They are made from cloths (lace, knits, linen, silk), bamboo, paper, beads, plastic, vinyl, and other materials. They come in an assortment of shapes and designs, and are sized to accommodate multiple table settings. Restaurant placemats are often designed with menus, ads for businesses and events, and as doodling sheets for children. Some placemats contain extra padding for heat absorption and like coasters, some are disposable. The article “Placemats” from www.etiquettescholar.com, recommends that we use placemats on a table set for no more than ten people. Any more than that creates a lack of uniformity, according to the article’s author. Placemat prices range from $1.00 to over $1,000.00.