Many of the pictures you see the rods were already there as these are rental units of different types. I did not want to make any physical changes that were not easily removed so the curtain pockets were determined by the type of rod. It is not too often that you find a double continental rod. In the window picture number 1, this was a continental rod. It is wider but thinner than the little white curtain rods. It was a typical 2.5 inch wide flat continental rod. Sometimes this flat rods can be as wide as 4.5 inches. The tie backs were just a strip of material 5 inches wide folded in half topstitched with 1/4 inch folded in on each raw edge and the ends and little plastic white rings sewn to the end of the strips so you could wrap them around the curtain and hook on a tiny nail tapped into the window frame or a small cup hook screwed in 3/4 of the way down the frame.

Picture 2 is a Door with a double Rod. The valance is on the top rod and the simple rod pocket panels are slipped on the second rod with a pair of iridescent sheers tied back together with some of the same iridescent sheer fabric. The small blinds underneath afford privacy when needed but sunshine and a view when you want it.

Picture 3 is for the small window that is two cafe rods with a small sheer panel in between two panel cafe curtains layered for the decorating effect rather than for privacy and the shelf in between was already there which made the type of curtain decision for me.

Picture 4 is a door that is glass, but using the blinds for privacy, I opted for a lace panel curtain. The rod on this door was a traditional curtain rod but the one that is 1 inch from the wall whee it curves.

Picture 5 and 6 windows are made in the traditional way, and had traditional curtain rods. The picture window that looked out on the water had a double rod and I used sheers on the inside rod and the typical rod pocket curtains on the front rod and just pulled them back for effect. In this case I used cup hooks in the window sill and for the pull back used shower curtain clamps as they were big enough to put the whole panel in and then just hook it on the cup hook. The drape over of the pulled back curtain panel hid the shower curtain bracket.

The 6th picture window is a a Cord Rod with Flat Panels on each side and an Iridescent sheer in a turquoise in the middle of the same cord rod. This was a high rise and I kept the blinds shut on this window so it was really for the effect of the color combination to separate my studio apartment into living areas.

Picture 7 is a bathroom window and shower curtain that matches.

2. Singular, for curtain only

3. Double for sheers under curtain or curtain under valance

4. Triple for sheers under curtain and valance over curtains

Same as above, but straight accross sitting on a bracket, so no curtain sliding onto the length to the wall...These sometimes have a finial, or decorative end, such as a gold ball or arrow or diamond shape

1. Same fabric whatever width you want... sewn in a circle

You can use a white plastic circle on the end of a strip.

2. A braided tieback with tassel

3. A clamp of some kind like a large oval shower hook clamp.

4. You can use a contrasting fabric in a circle or strip to hold them back.﻿ 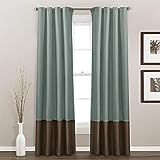