The Importance of a Comfortable Mattress

The Importance of a Great Mattress

As people spend most of the time sleeping on a mattress, it becomes something taken for granted, but shouldn't as if you live until 90 years old, 30 of those years are going to be spent on it. That's a quite extraordinary 262,000 hours of your time. So it better be comfortable.

Now of course they wear out, so we change them, but the average time that people throw them out is after ten years. That's about 30,000 hours to time spent on the top of it. Now here's a crazy stat. That's the equivalent of driving your car 1.5 million miles. Can you imagine how uncomfortable your car seat would be after that many miles without any maintenance? It would be absolutely shot. So is your bed.

So, if you own your bed for 5 years that's still 750,000 driving miles and so you'd still see a lot of distortion in the seat profile.

On these stats, your bed should be replaced every three years. This is especially true if you're a larger person. The reason is that everyone lies in the same position on the bed. You take up double your space as on average people will roll over from one side to the other every half an hour. That gives quite a lot of distortion to different heavier areas of your body over time and that's where you get posture weakness and damage which leads to bad backs.

To be honest, like most people, I hadn't given mattresses a lot of thought until recently when my wife started getting shooting pains down the back of her legs. This is called sciatica and comes from the sciatic nerve in your lower back.

My wife is tiny at seven stone and like the rest of her family, is ramrod straight (unlike me). So this was a big unpleasant surprize. We both avoid doctors as long as we can and she hates western medicine. I take Voltaren like a shot if I ever have any back pain but my wife has to be in severe pain before you can even give her an aspirin.

So, she was in severe pain because she said she'd better see a doctor. If you've ever had sciatica you'll know what's it's like but we could be walking down the road and she'd suddenly come to a stop leaning on the first thing she could find. The pain lasts from half an hour to pretty much the full day and she could only describe it like a toothache down your leg.

Anyway, she was good for a few days and that's when I wondered about our bed for the first time and whether that was causing this sciatica.

It only took a minute to feel exactly where the pressure points on her side of the bed had badly weakened just by pressing down by my hands. My side was even worse as I'm heavier, but although I've never had sciatica I've had a lower back problem for years and carefully watch it even tying my shoelaces.

So if you've had your bed for over three years just press your hands firmly down where you usually lie going from your shoulders down to your ankles and on an average bed you'll be able to feel a complete imprint of yourself.

If you can feel that imprint - it's time to upgrade your mattress.

Why we choose a Tuft and Needle Mattress

Feeling rather alarmed at what was going on while we slept - that is what we thought supported us was actually getting weaker over time, we made a fast decision to upgrade our mattress. I consulted my brother in law on the off chance that he might have looked into this. Only reason for this is that he's research mad and through his recommendations, our entire house is kitted out with the best of coffee machines, TV's, high pressure cleaners, because he's done the research work for us.

It was him that recommended a Tuft and Needle mattress. I'd never heard of one but loved the name straight away. He said they'd upgraded about a year ago and just had never slept on anything like it before.

Our criteria was simple. Given the amount of time we use one, money we thought wasn't going to be a big object. After all we weren't replacing the entire bed, just the mattress. We also had been suddenly jolted into the realisation of how a mattress was so incredibly important for your posture. Number two though was that through the night my wife through hormones or whatever gets hot and is such a good sleeper she can kick the duvet off without even knowing it. I then wake up cold on my side. After our own research into this we discovered our mattress was made of 'memory foam' which is a heat trap.

We're a bit old fashioned so also wanted the mattress actually manufactured in the USA, not just designed here but built in Mexico or China as most are.

Our thoughts on the Tuft and Needle - Good and Bad

Well first of all they've been an incredible company to deal with. What gave us confidence was that it came with a 100 day sleep guarantee. You could return it after 100 days no questions asked if you didn't like it. We won't be doing that we love it but also it comes with a full 10 year guarantee. We won't see that through either as from now on no matter what the guarantee or if it's the best bed in the world, we're going to replace this in three years time.

The bed came with a strong odor. It wasn't too unpleasant but just a bit off putting. I called Tuft and Needle straight away as we were about to return it but the girl on reception said the mattress had for coolness and support, gel and graphite and that takes about three days before it will dissipate. True enough after three days it was gone.

After the first nights sleep I got up and still had an ache in my lower back but after a little stretching it was gone and then it never recurred. I reckon it was my back actually straightening itself up on the new mattress.

Best thing of all though was that my wife hasn't had sciatica again. She held off going to the doctor as we thought we'd give this new mattress a go first and it was the right call.

Unpacking and setting the Tuft and Needle Mattress up

Questions and Answers on the Tuft and Needle Mattress

What size is the mattress?

A friend of my brother in law has had one for awhile. He's 6'4" and weighs 280 lbs. He said it took a few weeks for him to wear it in and he ended up buying a mattress protector but wouldn't buy anything else now. He said for him it just needed a bit of tweaking.

Is the mattress firm or soft?

It's firm but comfortably firm. Soft when you sit it on though. On a scale of 0-10 for firmness it's rated as 6.

Can it be used as an adjustable bed?

Is there a weight limit?

Can you use a heated pad in winter on the top?

Yes you can with no danger of damaging the foam.

What level of motion transfer is there when one person rolls over?

How long does it take to arrive?

From Amazon, we got ours within two days. 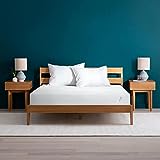