The Surprise Uses For Your One Cup Coffee Maker

M. T. Dremer married a long-time vegetarian 5 years ago and switched to a plant-based diet 3 years ago.

My wife and I are avid coffee drinkers. Though we discovered, early on, that we hate washing coffee pots. This extends to most dish washing, but it was also clear that we didn’t need a machine that made that much coffee per brew. So we always looked longingly at the one cup coffee makers that offered a larger variety of coffee options with fewer dishes to wash. It came to a point where we caught one on sale and broke down to treat ourselves. I’m not going to go too far into detail about what these machines normally do because I don’t want to sound like a walking advertisement, but most have your standard coffee, tea and cocoa brewing options. But these are all part of the intended uses for a one cup coffee maker; this hub is about all the unintended uses that my wife and I have discovered.

(Disclaimer: Please note that using your one cup coffee maker for anything other than the intended uses is likely frowned upon by the manufacturer. Follow along at your own risk.)

The first thing you need to understand, before going any further, is that, when the little K-cups (the coffee grounds) are not in the machine, it just brews hot water, and it does this in a surprisingly short amount of time. It’s important, however, to rinse out the funnel where the cups go, prior to brewing the water, otherwise your food is going to taste like coffee. Which part you rinse will change depending on which brand of coffee maker you have, but essentially you have scalding hot water in under a minute. So, let’s see what we can do with that water.

You know the ones I’m talking about; those super cheap bricks of sodium that single men survive on. The instructions on the packet tell you to boil the noodles in water, but I discovered, while watching Ponyo of all things, that they could also be made with boiling water from a kettle. If the coffee maker produced water hot enough to brew tea, my wife and I thought, then it should work for the noodles as well. Basically you put the dry noodles into the bowl (it helps if you break them up first), brew the hot water over it and cover with a plate for approximately three minutes. After the noodles are soft, stir in the seasoning packet and consume. This also works with specialty Ramen (like Dr. McDougall's vegan cups) though if they are whole grain noodles, they will take longer to soften (approximately 10 minutes). Also, you can microwave frozen soup vegetables and mix them into the noodles for a slightly more nutritious meal.

I’m not a huge fan of oatmeal, but my wife enjoys it. Normally she cooks it in the microwave, but one morning I was feeling particularly lazy, so I suggested we make it in the coffee machine (it arguably takes the same amount of time). The same basic concept applies here as it did with the Ramen. Put the hot water in, cover, and allow to soak. Afterwards you can add any combination of milk, sugar or whatever punches up your oatmeal.

I haven’t actually attempted making rice with the coffee machine, and I’m not sure if it would work because rice typically has a longer cooking time, but we did discover that Couscous works just fine. There is one extra step with this one, and the one below, in that it requires melted butter. You could try to melt the butter with the hot water as it comes out, but I worry that it would cool the water down too much to be effective. With this in mind, I melt the butter first in the microwave, which usually takes about fifteen seconds. Then I put the bowl under the coffee maker and add the hot water. Afterwards, you add the couscous and cover for a few minutes, then fluff with a fork and sprinkle on any desired seasonings. It’s a good substitute for rice, but I’ll have to get back to you about whether or not it’s possible with rice.

This applies specifically to potato flakes; the kind you buy in a box next to the stuffing (It’s possible that this method also works with stuffing, but I haven’t tested it yet). They similarly require melted butter so repeat the steps from above, then gently stir the potato flakes into the bowl until the consistency is good. Salt is suggested in a couple of these, but it can really be added at any time for taste. 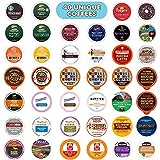 Why am I so lazy?

So, realistically, every discovery I’ve made was done so out of laziness, which again is arguably the same as microwaving. You wouldn’t think that boiling water on the stove would be that hard, but when you consider that my wife and I work the late shift at our jobs, it’s understandable that we don’t want to bust out all the cookware at 1:00am. At least, that’s how I’m going to justify it.

Really, any recipe that calls for roughly a cup of boiling water can be adapted to your one cup coffee maker. However, pay attention to the instructions. If it requires that the food be boiled for a descent amount of time, then it probably won’t work. For example, I don’t think you could cook regular pasta with the water, nor could you cook anything like an egg or a full potato. Also be mindful of safety. The water that comes out of these things is very hot; be sure that your coffee maker is on a flat, strong surface and that you have properly supported the bowl so that it won’t fall.

There are many more cooking options waiting to be discovered. Maybe you already knew about some of these, or maybe I missed one that is even better. Please let me know your ideas in the comments section below.