Why You May Want to Replace Your Water Heater Now

Have you been hearing your old water heater grumbling at you, rumbling every now and then at odd times? While not as embarrassing as hearing your tummy growl, it can still be disconcerting. What's going on, anyway? Should you replace it, or wait? 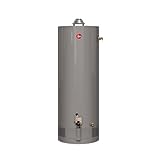 Rather than take too much for granted, I'll pause here to give a quick (I hope) overview of gas water heater parts. I'll start at the top, at the ceiling.

The 3" or 4" 'tin' pipe going from the top of the heater to the ceiling is the vent. It carries the products of combustion (carbon dioxide, water vapor, carbon monoxide) to the roof and away from your living quarters. This vent pipe rests on a downdraft diverter; this fitting, which looks kind of like a four-legged spider, prevents the flame at the bottom of the flue from getting blown out when the winds roar outsides and shoot down the ventpipe.

Below that is the top of the heater's skin. There are two short pipes attached up there, one for the incoming cold water, and a second for the outgoing hot. Usually, both of these are connected to the house piping with some sort of flexible connector. The cold side one is the one with the shut-off valve on it. Sometimes there is a third connection, with a brass valve connected to a short length of pipe. More on that later. 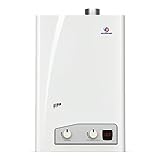 The incoming water is directed to the bottom of the tank by an internal pipe, called a dip tube, which is made of plastic. Not long ago we had a rash of dip tube failures, which resulted in customers running out of hot water very quickly, and their plumbing clogging up with small white bits of plastic.

The water tank itself is made of steel, on the inside of which a glass (not fiberglass, but glass) lining has been melted. This glass lining would make the tank last just about forever, except it cracks eventually, and then the tank starts to rust.

Also inside the tank is an 'anode rod,' which is made of aluminum or magnesium. It is the job of this rod to deteriorate, a job for which I feel well qualified. The idea is that, instead of the steel tank rusting out, the anode rod will break down. This protects the steel tank. If you get an extended warranty heater, you probably have two of these. The life of a heater can be extended if you replace this rod, as it disappears after two or three years - then the tank starts to rust.

Running up the center of the tank, from the burner to the downdraft diverter, is the flue. Inside the flue is some sort of baffle, designed to transfer as much heat as possible from the hot gases to the water. The weld at the bottom of the flue, where it joins to the bottom of the tank just above the burner, is where heaters usually fail.

The burner and controls

Below the tank is the burner assembly. This is usually stamped steel, formed to make the flames come out in a pretty ring. There's also a provision to mix air into the gas first, so the flame is a pretty blue. There is also a pilot flame, which burns all the time, keeping hot a small metal probe called a thermocouple. The thermocouple produces a small electric current, and this allows the gas valve to turn on for the main burner when you want to heat water. If the pilot goes out, or the thermocouple goes bad, your heater won't light.

The gas valve, on the outside of the heater, controls the water temperature (approximately) and works as part of a safety system. As I said last paragraph, if the thermocouple does not produce enough current the burner will not come on. It will, in fact, shut down completely, allowing no gas whatever to get through. That's why you have to press a button or knob to light the pilot; you're bypassing the safety system so that gas can get to the pilot.

The thermostat part of the gas valve has markings roughly indicating how hot the water coming out will be. THESE MARKINGS HAVE CHANGED IN THE LAST FEW YEARS. Because some people got scalded from hot water, the 'desirable' range on the thermostats was lowered. So, whereas your old heater's thermostat was just dandy set on 'normal,' your new heater's 'normal' setting is probably 10 degrees cooler. The normal response is to raise the setting to 'warm;' try to restrain yourself. People burn very quickly, very badly, when hit with 140-degree water. Alternatively, they get hurt leaping to the side trying to get out of the water in the shower. Bad, either way.

Also connected to the thermostat is the gas line. Much like the flexible pipes for the water lines, the gas line is usually a flexible connector also. It's made with a special material, which stands up to the gas; it turns out that copper has a problem. The gas flex is also connected to a shut-off valve with a small lever you can turn off when you have a problem there. 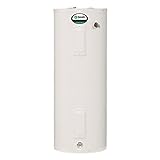 Our heaters are called 'storage heaters,' because the water is heated and then stored, hot, until needed. Of course, the whole time it's waiting for you to take a shower or whatever, it's cooling off. This is why there is a layer of insulation between the steel storage tank and the skin of the heater.

For years, the insulation was fiberglass, rather casually applied. Then somebody did some testing, and found that foam could be blown between the skin and tank, and it was much more efficient, and didn't look so ratty. 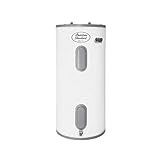 Near the thermostat is a label from the manufacturer. This will have the heater's capacity, its gas consumption measured in Btu's (British thermal units), its model number, its serial number (which often has the manufacturing date in code, as a two-digit year code, and a two-digit week code). It will also tell you that the heater is approved by various regulatory bodies, who actually made it, and other stuff.

Although there are countless 'labels' on heaters, seeming to indicate lots of manufacturers, there are in fact only five or six residential heater manufacturers left. heir basic residential heaters are all fairly similar, as competitive pricing and market pressures have made this a very cost-conscious market. As you spend more money on heaters the advantages of one versus another become apparent.

This looks like a hose faucet, and in fact it is. You're supposed to drain your heater regularly, say once a year, by turning off the cold water inlet, opening up your hot water tap at the bathtub, attaching a hose to the drain valve, and opening up the valve.

However, we all know that only weirdos actually do this, so the drain valve has been cheapened beyond recognition, and now instead of being heavy brass valves, they are often cheap plastic fittings that often don't work even once. Which makes the plumber's job of replacing the heater hard, as a 40-gallon heater, when full, has 320 pounds of water in it, plus the weight of the heater.

That extra valve at the top of the heater

I told you I'd get back to this. At the top of the heater, or on the side near the top, is a safety valve. This is a 'temperature and pressure safety relief valve,' or a T & P as we call 'em. If the water temperature in the tank goes over 210 degrees (just below boiling) or if the pressure exceeds 150 pounds per square inch, this valve will bleed off the excessive pressure so that the heater won't become a bomb.

There is a pipe attached to the T & P which carries the discharged water away somewhere relatively safe, but not hidden.

Besides the T & P, the thermostat has, hidden inside, a device which will shut the gas off to the heater if the temperature gets to 210 degrees.

And lastly, the whole house water system has a pressure relief valve, to bleed off excess pressure. 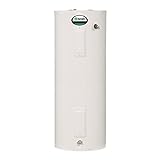 Back to the story

Because our water is fairly hard hereabouts, when it is heated some fine lime sediment settles to the bottom of the tank. Over time, this becomes a thick sort of muck, which gets baked, under pressure, every time the burner comes on. If you drain your heater once or twice a year, you can flush this muck out before it becomes a problem; but who has time for that?

So, after awhile the muck becomes like a stone (no, I don't know what kind, ask a geologist), and it will not drain out, ever. But there's more to it. When the burner comes on and the 'stone' gets heated, the water which saturates the stone turns to steam, and expands rapidly. This causes the rumbling noise, as the steam expands and dissipates into the water. Needless to say, this makes for a very inefficient way to heat water. Also, the extreme differentials in temperature and expansion/contraction cycles cut short the life of the steel tank and the glass lining in its interior.

You're probably wondering, does this mean my heater's about to go kablooey? Not at all; all properly installed modern heaters have numerous safety features to prevent that. It does mean that your heater is living on borrowed time. 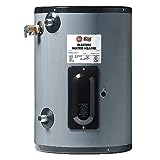