DIY or Extreme Makovers: You Can Be Tim the Tool Man - or the Toolbelt Diva

I miss Home Improvement on TV, although I can still catch reruns late at night or on a friend's cable stations. HI and 3rd Rock from the Sun are two of the most entertaining shows I ever watched in their prime, which were few, because so many shows were so bad.

Learning to become handy around the house and auto by trial and error was a lot like the crew from 3rd Rock watching Tim the Tool Man and trying to imitate his techniques without understanding the uses for which each tool was designed. Luckily, I was able to follow a repair and maintenance manual, the related books at the library, and even the roaming library of tools available in a Mobile Tool Library Van in our community.

So, it was a lot of fun and saved a lot of money in a steakhouse where I was assistant manager when some wall lights malfunctioned and I was able to require them. We had them inspected for code compliance and we were OK'd. That felt really good!

A friend of mine left home when she was only 16 and made a living as an electrician's apprentice, because she had taken apart lamps and other electric devices at home and learned how to wire them correctly.

If we can do it, so can you! -- And not with all the accidents that Tim Taylor had on Tool Time. You can do it with some awesome resources that I will list below.

Columbus, Ohio and other cities offer a Mobile Tool Library, funded by tax dollars. Much like a Book-Mobile, this can be thought of as the Tool-Mobile. Tim the Tool Man and Al would love it.

The service is designed to facilitate low-cost home maintenance and improvements with tools and equipment free-of-charge to renters, homeowners, and landlords. Can't afford to buy a drill for a one-time job? - Get one from the Mobile Tool Library. You can even borrow household items like gloves and push brooms.

Columbus provides 200 different types of hand tools and power tools that can be used for home repair, maintenance, landscaping, and painting. Borrowers need to show proof of home ownership of have the permission of their landlords.

Heavy and large equipment like ladders and tillers are delivered to the borrower's residence upon request.

Tool Time was sponsored by the fictitious Binford Tools, which was patterned after manufacturers such as Sears’s Craftsman and others.

One of the very famous Tool Time Girls on the show was none other than Pamela Anderson (who left to go to Baywatch), followed by Debbie Dunning.

Bob Vila, of This Old House fame, occasionally visited the show and was Al’s idol, although Tim considered him an arch rival.

A favorite character played by Earl Hindman, who died a few years after Home Improvement went off the air was Wilson, whose face you never fully saw, because it was hidden behind fences, bushes, newspapers and other items as a running joke.

For a full rundown on cast and crew, see Home Improvement.

The Carey Brothers, James and Morris, provide a comprehensive home and garden site with daily tips and an archive for maintenance and repair of all kinds of devices in your life. They also offer a weekly Radio Broadcast and PodCasts, links to great suppliers, eNewsletters, weekly projects, and even cooking tips.

This is likley as close as possible as we can come to a real life Tool Time. I wonder if they ever have Tim Allen on as a guest? That would be fun.

Extreme Makeover: Home Edition is a Cable TV show that has brought a lot of joy and enhanced the quality of life for the homeowners it has helped. One such homeowner was a returning War in Iraq veteran, whose entire home was refurbished upon his return from the war. I was able to see this home at the Open House given there on the day it was completed. The workmanship and the results were eye-popping. See Extreme Makeover: Home Edition.

This show also helped rebuild homes destroyed in Hurricane Katrina and other disasters and these homeowners, some of the advanced senior citizens, will be forever grateful.

In addition to the good work of this show, viewers can learn about home repairs and modifications before consulting contractors, probably saving some money. They will at least come away with good information and some innovative ideas. Home ownership can be a joy or it can be a nightmare, as in The Money Pit. I hope yours is a good experience and your home a refuge form teh craziness of the world.

There is also a Radio Show called The Money Pit with Tom and Lisa. 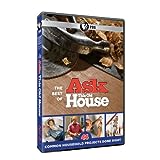 This Old House is a web site connected with the television show of the same name and gives a significant amount of information about home repair and maintenance as well as remodeling ideas and DIY projects. They offer videos as well and printed materials and lists of resources for anything inside and outside your home.

They also offer a magazine subscription.

Bob Vila, who was originally with This Old House, now hosts BobVila.com with its large DIY Library and his own TV Show: Bob Vila. information about the show is listed on his web site.

Another related show is Home Time, which has been on PBS since 1986.