Bee Balm Monarda for the South

Monardas are perennial wildflowers and are members of the mint family (note the square stem) so they are considered an herb. All parts of the plant are aromatic. Butterflies, hummingbirds and other pollinators are attracted to the nectar rich flowers. The Monarda family has been used as a medicinal herb since the early Native Americans.

The Monarda species is a native herb that contains many beautiful and easy to grow perennial flowers.

The Monarda family is filled with lovely flowering plants that are also aromatic herbs. Many have been used in herbal medicine for years by Native Americans. They make delightful tasting teas and are also used in potpourris. Most Monardas bloom in the spring, but a few, like Spotted Horsemint (Monarda punctata) bloom in the late summer and fall. Wildlife including hummingbirds and butterflies use the flowers. Most are easy to grow and spread by thin rhizome like roots or seeds.

Two to four feet tall plants display balls of red flowers in late spring to early fall. Aromatic leaves and fruit can be brewed into a delightful tasting tea. In fact history says that this was the tea that many colonist enjoyed after the Boston Tea Party. The crushed leaves are supposed to help alleviate the pain of bee stings. Monarda didyma performs better in the upper regions of the coastal south.

M. didyma prefers acid, moist soil. It's native habitat is rich woods, stream banks and meadows. In the deep, coastal south, Scarlet Bee Balm doesn't bloom well. In fact, our hot humid summers will often kill it altogether, but in the cooler areas of the south it is hardy and gorgeous.

Propagate by root division or seeds.

Herb Garden Series - Bergamot print by Spice can be purchased on Zazzle.com.

One of the names of Monarda didyma, Oswego Tea, came from the Oswego Indians who taught the colonists how to use the herb after the Boston Tea Party (1773) and the resulting Blockade.

This native herb has long been used as a medicinal plant by many Native Americans. The Blackfeet used this plant as an antiseptic in poultices for skin infections and minor wounds. A tea made from M. didyma was used to treat mouth and throat infections caused by dental problems and gingivitis. Bee Balm contains Thymol, which is the primary active ingredient in many commercial mouthwash formulas. The Winnebago also used Bee Balm tea as a general stimulant. It was also used by many Native Americans to treat excessive flatulence. 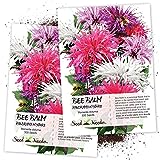 Monarda fistulosa is well suited for the southern United States. It is a perennial plant that grows 2 to 4 feet (sometimes 6 feet) tall with pink, white to purple ball shaped blossoms in late spring to early to mid summer. As with M. didyma, all parts of the plants are aromatic and make good tasting tea, either alone or in combination with other herbs. It is also said to draw out bee stings. Unlike M. didyma, M. fistulosa will bloom consistently in the coastal south.

M. fistulosa is a hardy, easy to grow perennial and is happy in full sun to part shade. It prefers rich soil, but acid soil, poor sand or clay is okay. Soil that is moist to dry is fine and it will even tolerate some wetness in the winter.

Propagation: The rhizomes of M. fistulosa often colonize, so they can be propagated by root division, seed or by cuttings.

The Native Americans used Monarda fistulosa in much the same way as they used Monarda didyma, to treat colds and the flu.

Hummingbird Moth Postcard by naturegirl7 can be purchased on Zazzle.com. Check out more Monarda prints and products below.

The unusual creamy yellow blooms with purple spots of M. punctata are butterfly magnets. This drought tolerant, short lived perennial grows to about 3 feet tall so the plants are good additions to the rear of a border. It prefers full sun (to part shade in the lower south) and well drained sandy soil of average fertility. it tolerates salt spray, so it can be grown by the seashore. It is perfect for the back of a flower border, a butterfly garden or a natural meadow area.

Propagate by root division, but it is easier by seed.

History and Medicinal Use

Like the other members of the Monarda family, Horsemint contains Thymol, an effective natural fungicide and bactericide. A tea made from its leaves was used by Native Americans to treat colds, flu and fever. It increases sweating. It was also used to expel hookworms.

Weeds of the South Book

Please don't leave without jotting down something.