How to Create the Perfect Boy Cave

Everything your son wants for his GuySpace

What accessories do you need to establish your son's room as a manly refuge from the outside world?

My sons and I consider the following items to be the important elements of a proper Boy Cave.

(Image is from a Boy Cave poster that is available on Zazzle.)

The importance of the Boy Cave

I asked my sons for their thoughts about what a boy's room means to him. Here are their responses:

Everybody should have a personal sanctuary, some space that is under their own rule and reflects their own personality. Including kids. Even from early ages, children should have some area where they have a sense of ownership. Check out these articles from Inspired Everyday Living and KST Family that talk about the importance of a sense of ownership (which is NOT the same as a sense of entitlement) and how it benefits children.

And Lisha, aka TheLuckyMom, shares a lovely personal story about making peace with the way her boys keep their rooms.

Jeff of JeffsOldHouseBlog, in his post listing the requirements for a Boy Cave, says that one of the requirements is that a Boy Cave must be underground. But most folks I know don't even have basements. I think in most cases the Boy Cave is going to be the boy's bedroom.

Letting your child have some area that expresses his own tastes suggests that his feelings are just as valid as anyone else's. So let him rule his roost. The parents still control the purse strings, so don't cater to his tastes beyond what makes sense for the family. But if there's a certain amount that you would be spending on his bedroom, let him have plenty of input about how that money can be spent.

So what are the trappings that will make a boy's bedroom a haven, a castle, a true Boy Cave?

Of course, he'll want some electronics

It goes without saying that your boy will want as many forms of electronic entertainment as you will allow. These will be the center of the boy-cave universe.

The TV, of course

The game system, of course

The music player, of course

For your own sake, get him some headphones

You don't want the whole house to be subjected to the sounds of his video game background music. Give him headphones, but MAKE SURE you talk with him about appropriate volume levels. Don't let him blast out his hearing.

The right accessories will ensure that nobody mistakes his room for his sister's room. There are lots of cool posters, signs, and wall decals that can highlight a boy's favorite things.

The "Boy Cave Keep Out" and "Boy Cave - Enter at your own risk" posters are both my own creations and can be found on Zazzle at TheJoanStore.

Other ideas would include:

But the boy can probably tell you better than me what posters he would like.

To eat or not to eat?

Your son would love to be able stay in his room without coming out for snacks. Should that be permitted?

Should food be allowed in the Boy Cave? 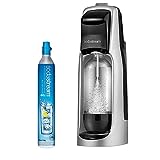 A soda-maker: Can life get any better?

If you do decide to allow food and drink in the Boy Cave, this gizmo will be his best friend. He can make his own soda out of the liquid of his choice.

Benefit for Mom: Instead of sugary drinks, he can carbonate fresh juices, or water/juice blends.

Even if you do allow your boy to have food in the room, he may not be ready to have his own mini-fridge.

Save something for him to look forward to in his future Man Cave!

Air freshener: Because Mom needs to be able to go in there once in a while!

Here are some macho ways to overcome the smell of sweaty socks.