Brave bedding & bedroom décor will allow you to create a beautiful Brave themed bedroom for your daughter to enjoy.

The Brave bedroom theme allows girls to surround themeselves with the elements they loved from the Disney Pixar Brave film.

A Brave Bedroom will feature characters that your child loves from Brave; including fiery Princess Merida, Angus, Hamish, Harris and Hubert.

Make a Statement with Your Bed

One of the easiest way to transform a room is with bedding. This functional piece of décor can change your room from boring to exciting in just a few minutes. The

What I like about the Brave comforter is that it depicts the fiery Princess Merida with her best friend horse Angus. I also like that this comforter is made of microfiber and is machine washable so it can be popped right into the washer if there is a spill.

While you can buy the official Brave pillowcases separately you do not need them to complete the look of your Merida themed room. Just pair the comforter with generic colored pillowcases that go with the print of your comforter.

Will you use Brave or Merida themed bedding to transform your child's room? 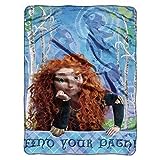 To give your child's bedroom a Brave makeover simply add a poster to create visual interest. Children love looking at the Disney characters they love. Engaging graphics stimulate a child and are easily removed when interests change.

Want to make a huge change to your child's wall in a manner of minutes? Transform your little one's bedroom into a Disney Brave themed room by adding wall decals of their favorite Brave characters. Find Merida, Angus, and brother bear triplet wall decal available for purchase from amazon. 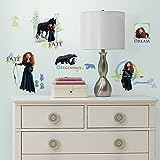 When decorating your child's room do you prefer hanging posters or using peel and stick wall graphics.

Tell us about your little one's bedroom. What items will you include in their Princess Merida bedroom?