Where to buy mid-century modern (aka danish modern) furniture ...

I bet you were just thinking "Where can I buy some really cool furniture, and what century is that everyone is talking about?"

Well, in the middle of the 20th century - that means around 1950 - Danish designers were taking the home decorating world by storm. Names like Charles & Ray Eames, George Nelson, Hans Wegner, and Eero Saarinen (just to name a few) were creating the most sought after designs for the home. Fabulous chairs, coffee tables, credenzas, wall units and more were the all the rage.

Eventually, this period also came to be known as the Eames Era thanks to the success of the super-creative husband and wife team of American designers.

If you're a fan of the TV series Mad Men, you may have already fallen in love with this classsic contemporary style. The smooth, clean lines. The warm materials like Teak and Wool. The rich colors.

No wonder this style was so popular back then, and is definitely a hot ticket right now.

Do You Love the "Mad Men" Style?

how do you feel about the 1950s style known as Danish modern (or mid-century modern)?

This book on mid-century modern design is absolutely at the top of my list. 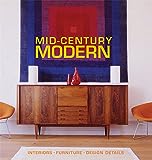 This is probably one of the best books you can buy when you want to educate yourself about the mid-century modern movement, or just get inspiration for your interior decorating scheme.

Books about the Mid-Century Modern Eames Era - learn more about this exciting period in design history!

This book by Judith Miller is such a great resource for decorators who want to recreate an authentic feel from the period.

There are so many design elements in any decor, so if decking your table is next on the list, go for this one. 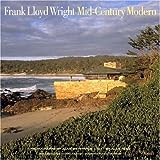 What little I could say here about Frank Lloyd Wright wouldn't even begin to scratch the surface, or in any way do justice to the awe-inspiring life story. This book is excellent is you want to learn just what a treasure his contributions to design were. 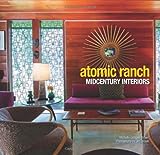 If you live in a ranch house from the period, or are thinking about buying one, this book will provide a wealth of design inspiration!

Forget the Books ... I want to Buy Something!

Even if you're not quite ready to buy a big-ticket item, it's free to browse (and dream) so you can get a better idea of what's available and how much stufff costs.

So start your midcentury modern journey right here in your quest for the perfect MadMen Style mid century furniture.

Whenever I'm redecorating a room, I like to start with the big pieces first, especially with vintage furniture - you're never quite sure what you'll find.

One of the most central pieces you can start with for mid-century modern style is a beautiful credenza made of hardwood. My personal favorite is teak, but walnut is probably equally as popular a design choice. It's all a matter of taste, of course.

Have a look on eBay and see if something grabs you right away. It's usually best to just go with your first instinct :)

Right now, I'm seeing a vintage MCM walnut credenza, a very stylish Danish one in teak, a Paul Evans original, and some other really fantastic finds. Some of the taller ones wouldn't be called credenzas (in my book anyway), as they look more like china cabinets, but still beautiful :)

These lists will be constantly changing, and the pieces mentioned are given as examples of what may be available.

Another large furniture item can be a room divider like the ones shown here.

Open plan living spaces were popular in the 1950s, and often sectioned off by room dividers rather than walls. These pieces can be use to define living areas, or be set against a wall. Either way, they're quite stunning.

be a smart shopper :)

Beware of the Sales Description or Terminology

Maybe I should say be aware rather than beware, but sometimes sales descriptions, if you read them fast enough, sounds like what you want to hear, and not what it actually is.

Words to look out for:

Generally, the chairs you find on amazon won't be vintage, but you can find some really beautiful styles inspired by the period. 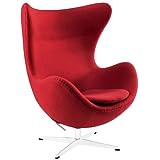 This is one of the classic shapes of the 1950s that's so instantly recognizable.

Shown here in Red Wool, this chair is a high-quality reproduction of the Arne Jacobsen "egg chair."

As you can see, the original vintage mid-century modern pieces will generally sell for a higher price than the retro designer inspired reproductions ...

These Danish Modern Chairs are such cool furniture pieces! There are quite a few different styles to choose from.

The Heywood Wakefield end tables are definitely some of my favorites when it come to MCM accent furniture. Some of them look like could be straight out of the Jetsons, or maybe even Star Trek. They're all well-made and beautiful, funky pieces of furniture.

One of the big names in mid-century modern design was Eero Saarinen. You may not have known that he was an architect, but you'll probably want to learn more about him. This is one of the best books available to help you do that, so pick up a copy before they sell out (again!)

When searching for "mid-century modern" pieces, you'll often come across this style known as "Atomic Style." You can read more about how the style developed, and the social issues of the time ...

*comments won't show up right away*

Did you find a great Decorating Item? - how did you like your visit ...