I can't help it! These orchids, dearly beloved and grown by my husband, just make me laugh when they bloom. I feel like I am having a day at the circus, with the clowns!

You know, my husband always says that I have saved him a lot of money on circus tickets, whatever THAT is supposed to mean, but I don't think it has anything to do with his orchids!

As you can tell, by my fingers in the background, this one is about three inches tall. For the life of me, it reminds me of a clown, with all of those stripes and splashes of color. Several bloomed on the same plant, and the delightful sight was just...laughable! I always imagine these orchids as "clowns", and picture them performing under the Orchid Circus Big Top. Don't mind me - it's just how I see them.

He grows quite a few "Clown Orchids", and I just love seeing them bloom!

This little guy just glistens! All of the images of my husband's exquisite orchids, represent their true colors, and are just as brilliant as they appear in the photos. The little fellow's petals are "glossy", too, which adds to the happy-go-lucky, devil-may-care presence that he has, and makes him look like his colors were just "painted on"!

Do you know what else he reminds me of? A Mummer, from the Mummer's Parade that I used to watch when we lived around Philadelphia. If any of you have seen it, you will be able to identify with my meaning. Can't you just see this little fellow "strutting his stuff" in the annual Mummer's Parade? I can!

Commonly known as the "Antelope Orchid", he's late! Hurry! Move aside! They already have brought on the clowns - this little slacker was taking a nap, and overslept. Now, he's running to get into the act, arms all akimbo!

His kind bloom profusely, on long orchid stalks, or stems. When they burst forth into bloom, it looks like there is a herd of running Antelope Orchids, taking off for "parts unknown". That is truly a site to see!

Spots and dots galore - and just look at that intensely fuchsia lip! This fellow just LOOKS happy, and joyful, and if he doesn't look like a clown! Part of the "fun", of this orchid, is the extreme difference between the graceful, elegant lip, the hooded "cowl", and the funky, irregular spots on the petals. He looks like an "oxymoron in the flesh", doesn't he?

From the Jungles of Borneo...

Under the Orchid Circus Big Top, allow me to introduce one of the most gawky, gangly, gargantuan orchids found in the world. This Clown Orchid is a bit confused about where he is, who he is, and what he is supposed to be doing!

Despite his befuddlement, his blooming always puts a smile on my face.

This Clown Orchid has "costume troubles"...

The poor little gal can never adjust her costume properly. It is always lopsided. The other "Circus Orchids" try to help her when it is time for her to perform, but they never can seem to "balance" her just right.

If you use a little bit of imagination, you'll see that she is CIRCUS, all the way!

The darling "little people" Clown Orchids - call them midgets or dwarfs or Lilliputians - they don't care! Only about the size of a dime, they are just tickled to be "in the act".

Because they are so very small, they decided to wear huge headdresses, so they can be seen under the big top!

Does this little gal look discombobulated, or what? When she comes into the ring, she does not speak - at all. Everything she does, is in mime, and she is just a riot! She trips the Antelope Orchids, takes the microphone from the Ringmaster Orchid, and pops the Lilliputian Orchids into her mouth!

Once the audience recovers from the shock of her outfit - which admittedly, is pretty bad, her speechless routine, leaves them in stitches.

Easy Orchids: The Fail-Safe Guide to Growing Orchids Indoors
We have told you, in some of our other articles, that orchids are easy to grow. The author has done a spectacular job of teaching others how to easily grow many orchids indoors. You don't have a "green thumb"? That is okay, this book will help you grow orchids indoors, successfully!
Buy Now

He Comes Onstage Clapping...Look at him!

His moniker is Mini-Mark Holmes, I think. This adorable little Clown Orchid is one of my husband's favorites. Like my favorite clown orchid featured above, he reminds me of a Mummer from the Philadelphia Mummer's Parade.

It is no wonder that some of the orchids strike me that way, as a lot of the Mummers look like clowns! 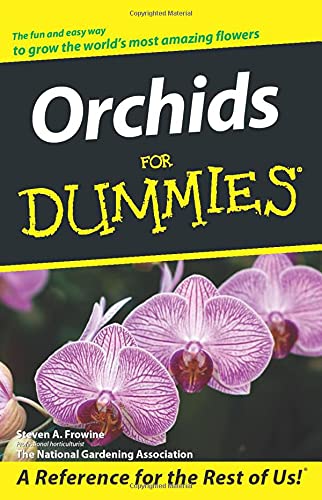 Orchids For Dummies
I freely admit that I am a "dummy" when it comes to orchids. If my husband ever decides he is tired of caring for our orchid jungle, I will have to follow the advice in this easy-to-read volume.
Buy Now

Talk About a Clown!

How would you like to wear THIS one, as a corsage? This funny, "funky" Clown Orchid smells heavenly, even though she is not going to win any beauty awards. She keeps the audience laughing at the Orchid Circus Big Top, from the moment she comes on. You just never know what she's going to do, but everywhere she goes, she leaves a trail of perfume behind!

You Can Grow Orchids, Too!

It is not as hard to grow orchids, as you might think. Take a look at these, and you can have your OWN "three-ring-orchid" circus!

101 Easy-To-Grow Orchids
I believe the title of this helpful book says it all. There are at LEAST 101 orchids that are easy to grow, and here is a great book to get you started!
Buy Now

We Cannot Forget the Ringmaster!

This fellow is very important! He is our Orchid Circus Ringmaster.

Without him, there would be chaos.

With him - there is chaos.

He tries, he really tries, but those Circus Clown Orchids just run all over him. Every other aspect of the Circus, he has under control, but he has never gotten a grip on those recalcitrant renegades. At any rate, he is the leader of the Orchid Circus, and one spectacular large orchid to view, when he blooms.

After all of these years, he's still a bit shy, when is supposed to be center stage - under the Orchid Circus Big Top. So, I just get my hand behind him, and give him a "nudge"!

For Your Viewing Pleasure!

I love to showcase many of the fascinating orchids that my husband grows, here on HubPages. There are only a few in this article. He stoutly refuses to let anyone in to see them, and will not provide guided tours of his magnificent blooms.

They make me laugh, and bring us a lot of enjoyment, as we hope they will bring to you!

One Beautiful Orchid Poster - I wish I could paint like that!

Calling all "orchid lovers" who like to display them on your walls! This 13 x 19 laminated poster is a quite a work of art. I cannot even imagine how one begins to create artwork of this quality.

I only wish I had the expertise to paint like that, but alas - that is not my claim to fame...

If you liked the Clown Orchids, you might also like our Alien Orchids! They are somewhere around here, and you need to beware of them. They will stop at nothing to carry out their agenda, which is to colonize Planet Earth.

Would you like to know how determined they are? Some of them initiated a rebellion, and they kidnapped me!

Unless otherwise specified, all images presented here were photographed by the author. - E. Tack