Block out an ugly view or the eyes of nosy neighbors, and keep the sun's heat from running up your AC bills while it fades your carpets and furniture, with decorative window film. Frosted glass, etched glass, tinted and UV-reflective, you can even find colorful DIY window films that look like beautiful stained glass, abstracts or floral designs.

Shades and curtains are not always the best solution to privacy and sun control. In small powder rooms or bathrooms, curtains just clutter the décor and gather damp; and if you've tried to fit a set of blinds to sidelights in an entry door, you'll know what a pain that can be... Re-glazing with frosted glass or removing a window is just too permanent, too expensive, and simply not an option if you rent your place.

So what's the answer? Decorative window film to the rescue! Privacy never looked prettier, or made more sense.

Many years ago, as a teenager, I had a basement bedroom and never felt comfortable that my curtains were properly closed, all nervy and self-conscious the way teenagers are. So I used a stained-glass pattern film to cover the street-facing window, and very much enjoyed the feeling of having my privacy secured. Not only that, it was so cheerful and pretty! On summer afternoons the sun shining on my decorated window made a glorious pattern of color all over my bedroom, just like a real stained-glass window's effect.

Unpleasant view? Nosy neighbors? Pretty stained-glass flowers in a press-on privacy window film are a quick, inexpensive, and delightfully decorative solution to a number of life's small annoyances. I get a chuckle from this Artscape commercial, but they do make the point. :)

Not all window films are created equal. Do be sure to check, before you purchase a window film, whether or not it is "adhesive free" or if you'll need to buy an installation kit (special glue) for it. Personally, I prefer the "window cling" type of film, but others don't mind the adhesive.

One of the great things about window film is you can often cut it to size or tile a couple of pieces to make a larger expanse - whatever you need to fit your non-standard windows, such as portholes, arches, the small sealed windows that many homes have in the stairwells, basement windows, and so on.

Do pay attention to the weight of the film you choose, as well as its application method and the appeal of its decorative design. I find the heavier the film, the easier it is to handle (especially for cutting down to a specific size or shape). The trade-off there is that some of the heavy-duty window films are going to be the kind you put on with an adhesive, instead of just being a window cling.

A good compromise, I've found, is a good quality mid-weight product (time and again, I do seem to come back to Artscape on this!) and usually one with a pre-applied adhesive if a cling type is not available in the pattern we're looking for. That's easy enough to handle without the plastic getting all fly-away with static, as can happen with the really lightweight window cling films, when you're cutting, tiling, and applying it.

Artscape 01-0115 Bamboo Window Film 24" x 36"
Bamboo is a perfect motif for a powder room's decor, and this is another of the easy no-adhesive Artscape window films that you can tile as needed - and the pattern works both vertically and horizontally. How about a bamboo stained glass film on the bathroom window for privacy, and repeated on the doors of the medicine cabinet or whatnot for decorative effect?
Buy Now

It seems to me that no matter what style or color scheme you're using in decorating your home, there's a decorative privacy film to fit the bill very nicely. I find myself drawn to the really vibrant colors - particularly those designs that are predominantly shades of blue or green, but for an older heritage home my first choice would probably be a pattern that most closely replicates the look of small panes of stained glass or pebbled glass.

If you anticipate a need to tile several pieces of window film together (sort of like hanging wallpaper!) to cover a large pane of glass, that's where the abstract and geometric patterns can make life a lot easier. There is often less material wasted in matching up the patterns between once piece and the next piece that butts up beside it, when you're dealing with straight lines or abstract images, rather than a realistic or more formally stylized pattern that calls for very precise matching.

Abstract Stained Glass, Decorative, Privacym Window Film(- 36" Wide X 27" Long)
This abstract pattern of window film, with its bold peacock blue tones and amber accents would be ideal for decorating a transom window or brightening a ground floor powder room with a punch of color while adding that much-needed privacy.
Buy Now

You can simply cut any film to fit an unusual shape, but larger pictorial patterns are not an ideal match for smaller windows, such as sidelights beside doors. An abstract pattern tends to work better in that application, as you don't get the sense of getting only a slice of the intended effect.

With an abstract pattern - or a geometrical one, too - you can often piece a couple of leftover strips or rectangles together when you get to the end of your supply, if there's one more small window to do and you don't have a large enough piece left but you don't want to spring for a whole new sheet or roll. Do the most visible or most important surfaces first, however, so if you do end up with a visible seam as a result of your frugal workmanship, it won't be in a high profile area. Your small laundry room window, for example, will likely be more forgiving than the glass in your main entry door!

Artscape First Stained Glass Window Film 24" x 36"
Personally, I'm not crazy about this particular pattern - your taste may differ - but I did want to show you how the window film works on an odd-shaped window. All of the really good window films, like those from Artscape, are made with a repeating pattern so you can tile the pieces of film (left, right, above, below) as needed to fit.
Buy Now

If you want the increased privacy and sunlight control of a decorative window film, but you're not so much interested in the stained-glass or color-tint look - consider the classic frosted glass or etched glass styles.

A piece of window film in the etched-glass style is a good choice for the window in an exterior door, as you have the added benefit of being able to see something through parts of it - say, if someone is standing outside your door, or if the taxi you called has pulled into the curb - yet it is very difficult for anyone outside to look through and see into your home.

As most entry halls are a bit on the dark side, that's another reason why the etched or frosted look (as opposed to the colored stained glass styles) is a good choice of window film for this application. 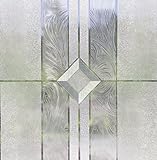 Vienna Accent Window Film, 12-inch by 83-inch
Window film that replicates the look of frosted and etched glass give you more privacy while still letting you peek out, and cut the invasion of strong UV rays while allowing in a fair amount of softly filtered natural light. Ideal for the window in an entry door.
Buy Now

To some extent, any window film that gives you privacy is going to help with UV control - shading out some of the more damaging sunlight and helping to keep your place a bit cooler in summer, so you can ease up on the AC and fans - but if you're looking for more serious green savings, check into the energy-saving decorative window films made especially to add a thin layer of insulation to your glass and/or cut the infiltration of UV rays and the hot summer sun.

Energy Film for windows is a thin and transparent insulating film that cuts the amount of solar gain in summer and the heat loss in winter that occurs through your windows.

Artscape's self-adhering ("cling" type) window film is one I like. It's made to filter out the harmful UV rays and let the visible light into your home, so it acts as a sunscreen for your carpets, drapes, furniture, artwork and other items that may become faded by strong sunlight exposure. According to the manufacturer, Artscape brand Energy Film allows 77% of the light to come in while cutting 97% of UV radiation, for annual estimated savings of 12-18% - nothing to sneeze at, if you're watching the budget for your heating and cooling bills!

Glare Control Window Film uses the same technology, but it's got a darker tint to provide 98% UV protection, according some of the manufacturers, and again is calculated to be able to cut your energy bills by 12-18% annually in southern states where air conditioning is a significant power cost.

The idea here is that the tinted insulating Glare Control window film, compared to the transparent Energy Film, keeps even more of the sun's heat from entering through the window glass during the summer, when you're running your AC and fans, then prevents some of the heat inside from escaping when the weather is cold and you're paying through the teeth to heat your home.

Which problem will Decorative Window Film solve in your home? - Protect your privacy, block an unattractive view, cut your costs on energy bills, or all of the