How to Grow Heliotrope 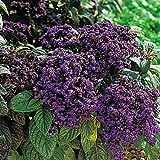 The heliotrope is an amazing flower, with well over 200 species officially recognized, with some estimating there may be as many as 300 species.

Cherry pie comes from the magnificent fragrance of the flower, which to many resembles that of a cherry pie if you smell one sitting in the kitchen. Others identify the smell as vanilla, or a combination of vanilla and cinnamon. Either way, it smells great and is a welcome addition to any garden or yard.

As for the name itself, it comes from a greek word 'helios for sun, and "tropein", which means turn. This is because the plant has the interesting behavior of turning itself towards the sun as it changes positions throughout the day.

Heliotrope a Perennial Grown as an Annual

Even though heliotrope is considered a half hardy perennial, it is grown in most regions as a half hardy annual. In zones 9 and 10 it can be grown as a perennial, and in zones 3-8 as annuals.

This means in the majority of areas it will have to have its seed sown indoors in containers and then transplanted as seedlings in the garden or larger containers.

Where to Plant Heliotrope

Heliotrope loves the sun, and planting in full sun in most zones gets the best results, although you need to check the variety and requirements to be sure.

In the hotter zones you should plant with some partial shade to protect against the hot, afternoon sun.

While heliotrope like moisture, they don't like it soggy, so they should be planted in a place which has good drainage but including richer soil to hold the moisture longer.

When to Plant Heliotrope

Other than the hottest zones, heliotrope needs to be grown from seed, and the seed should be sown approximately three months before the last frost date.

After the frost date arrives, wait another month before transplanting the seedlings outside in the spring.

How to Plant Heliotrope

Since the story of planting heliotrope is largely one of sowing seeds in containers, we'll start there, as once the seedlings emerge and grow, you simply follow the previous instructions as to where and when to plant them.

Once they grow to seedling size and it's time to sow the seedlings, you can simply place them in the ground at about level with the top of the root system. Press them down and add a little soil over them and mulch to retain moisture and protect against weeds.

Having owned a greenhouse business in the past and working with a lot of tiny seeds, I started to use a small salt shaker or other type of shaker with small holes in it so I could better control the distribution of the seed on the mix in the trays or containers.

Heliotrope is very small seed, so using something similar - unless you're only growing a few plants - is the way to go.

Divided trays are the best to use with small seeds, otherwise you'll have to get rid of a lot of them when you cull the weaker ones if you plant them in a tray in rows.

Sprinkle the seeds on top of the mix at a rate of approximately three in each pocket of the divided tray. After that cover the seeds up with a small layer of mix.

They prefer a temperature of about 70°F (21°C) for best germination results. Heliotrope should also be kept out of warm or cold air drafts during the germination process.

Flourescent light supplements or indirect sunlight is the best light source for the germination period. Don't place them in direct sunlight.

The seeds need to be kept moist, so keep a spray bottle handy to spritz them as needed. Don't make the mix soggy, as it'll result in the seeds starting to rot.

Germination can take anywhere from a couple of days to three months depending on the variety and conditions.

In warmer regions you can take cuttings from the plant to propagate new heliotropes.

When the strongest seedlings emerge over time, cut off the weaker ones with a pair of scissors rather than attempt to pull them out by the root. Many times you'll damage the root system of the desired seedling and lose them both if you attempt to remove them by pulling them up.

When the seedlings grow larger enough, transfer them into larger, individual containers until it's time to transplant them in the ground. You can use biodegradable containers or carefully remove the seedling when it's ready to be planted.

Once they're in the soil give them a drink, and be sure to keep the soil moist but not soggy where you plant them.

Space them anywhere from a foot to two feet apart.

Because of the enormous variety of species of heliotrope, it's impossible to identify a blooming season for them, because it can start in the latter part of spring and go all the way until the end of the fall season.

For a fuller look to the plant pinch the tips as they grow. It'll spread the plant out nicely. To encourage more blooms be sure to deadhead once the flowers start to die off. This is different than pinching the tips for new growth.

You can pinch a heliotrope in a couple of ways, depending on the desired outcome.

The one already mentioned involves pinching off new tips all over the plant in order for it to spread out nicely.

Another is to remove the side shoots until the plant reaches the height you want it to. From there you can begin to pinch off the top growth to maintain the desired height. This way focuses on the height

of the plant and not the width, while the former does the opposite, resulting in a fuller heliotrope.

Heliotropes are a wonderful choice for the garden, and with some thoughtful planning and a little homework, can provide great color and fragrance in your garden and yard from the latter part of spring to autumn.

They work great for a rock garden and for beds, providing low-lying ground cover or taller plants to highlight an area.

Either way, it is a great idea to include heliotropes as part of your landscaping strategy.