An Automatic Vacuum Cleaner - That Cleans For You

My grandmother is getting older but she still wants to be independent and remain living in her own apartment. However with her advanced age there are some things that she just can't do for herself anymore. One of those things is trying to push around a vacuum cleaner. So I thought about what we could do to help her with this task and I decided I would find her the best robot vacuum on the market.

Quite a few years ago I had bought myself a Roomba vacuum cleaner. It did a great job of cleaning the floors. However there were a couple of things that I didn't like about the previous model that I had bought.

One was that it didn't come with a home base. The home base is where the Roomba automatically goes to when it is finished cleaning to recharge its battery. So I was always having to unplug it and plug it back in. This would not be ideal as it would mean my grandmother having to bend over all the time.

The second problem was I couldn't preprogram it with a cleaning schedule so that it would clean the floors while I wasn't home. I would have to be there to start and stop it. Would my grandmother be able to figure out how to do that? Did they improve the technology to where you could now set it and forget it, so once it was programmed she would never have to worry about starting and stopping it?

Photos of My Old Roomba

I thought I would look into the new models and see if they had made improvements. I was quite pleased when I read that the iRobot Roomba 770 had addressed both of my previous concerns.

It came with a home base and you could preprogram it with a cleaning schedule. I don't expect my grandmother to be able to program it, but she wouldn't have to do it. We could buy her the Roomba and set it up for her.

After that it would do all the work all on its own and she wouldn't have to do anything other than empty it. Which is easy enough as it isn't heavy and we put the home base beside her couch. That way when she can bend over to empty it while she is sitting down. 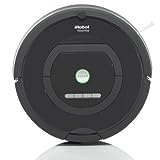 This is the Roomba that we got for my Grandma and she loves it. You can program the times that it will run at. So you can set it to clean even while you are not home. It helps my grandma to be able to keep living on her own.

She was a little skeptical at first when we gave it to her. It was so small she didn't think it could clean as well as a regular vacuum. Plus she was worried about trying to figure out how to operate it. We reassured her that we would set it up for her and she wouldn't have to worry about it ever again.

So we got it all set up for her and let her watch it work. While she found it kind of amusing to watch it do all the work, she still didn't quite believe that it worked. We asked her why, did she see some dirt left on the floor or something? Nope, she just didn't think it really had anything to pick up. So we opened it up and showed her how much was in the Roomba's bin. After that she was finally convinced.

You can watch the video below to see it in action. It will also explain how it works.

Now she brags to all her friends at Bingo and at her card club about it. She has even invited people over during it's cleaning time so they could check it out. Apparently quite a few of them then went out and got one for themselves. I can completely understand why. It helps older people to keep their independence for as long as possible. I would recommend this as a gift for anyone who is having difficulty with the task of cleaning their own home.

It is also great for the person who doesn't have a lot of free time. They can set this up to do the cleaning while they are at work. That way when they get home they can just relax or do whatever it is that they want to do. They don't need to waste their precious time that they could spend with family and friends on cleaning.

Carpet isn't as popular of a choice for homeowners anymore. Quite a few people are now installing hardwood floors, tile, and laminates instead.

A great alternative for people with these types of flooring is the Braava. It can take care of each floor type. Since it can do both wet or dry mopping.

What Products Have You Found Help With Keeping Someone Independent?