Ladybugs in the garden

Ladybugs are so likeable and delightful.

Ladybugs are the favorite insects of children because of their distinctive spots and vibrant colors. Farmers love them because of their voracious appetite for plant-eating pests such as aphids, scale insects and mealybugs which destroy crops. Designers and artists are inspired by them because ladybugs are colorful and are the cutest insects around. Furthermore, ladybugs are not poisonous to humans and will not destroy homes.They secrete a bad-tasting fluid when attacked by predators and their brightly colored bodies make them undesirable preys. Ladybugs are also believed to bring good luck. So, what is there not to like about ladybugs?

Origin of the name Ladybug

Do not be fooled by the name.

Ladybugs, or Ladybirds as the names suggest, are not actually bugs or birds but belong to the family of beetles. Not all ladybugs are "ladies." There are both male and female ladybugs. The ladybug scientific name Coccinellidae literally means a small red sphere in Latin, although ladybugs are found in a variety of colors, ranging from yellow, orange, maroon, and scarlet. Some ladybugs are completely black, with bright red spots on their wings.

Another name for ladybugs is coleoptera, that means sheath winged. So how did the ladybugs get their name?

In the Middle Ages, these insects were named after the Virgin Mary, who was often shown wearing a red cloak in many paintings and were popularly known as the 'Beetle of Our Lady'. The seven black spots on the wings of the ladybugs were said to represent the seven joys and seven sorrows of Mother Mary. The name 'Beetle of Our Lady' was eventually shortened to 'ladybug'. Other names by which the ladybugs are known are 'ladybird beetles' or 'lady beetles', 'lady cow' and 'lady fly'.

Facts about the Ladybug

Size: 1 to 10mm (depending upon the species)

Natural Habitat: Throughout the world

Number of Offspring: 1 - 2 (depending upon the species)

In many countries in the world, the ladybug is considered a symbol of good luck and some cultures even rear them as pets. The most likely explanation that ladybugs are lucky is because of their huge appetite for crop pests, like aphids, mites, white flies and scale insects. Farmers and gardeners welcome the presence of ladybugs as a blessing and venerate the insect as a lucky symbol. The good luck is not only confined to agriculture and harvest. They say that if a ladybug lands on your hand on a Sunday, and stays there until you count to 22, then good luck in on your way. A variant of this is that If one holds a ladybug and make a wish, the direction at which the ladybug flies is known to be the direction from which your wish will come true.

Your house is on fire

And your children all gone.

For she crept under

Males and females of many species look very similar, except to trained biologists. Ladybugs generally mate in the spring, producing a large clutch of eggs which is usually laid near a colony of aphids or other small insects. When the larvae hatch, they can feed on the insects until they get big enough to fly and find fresh food of their own. Ladybugs can also hibernate for brief periods, which allows companies to ship them by mail to people who want ladybugs for their classrooms or gardens.

The Life Cycle of a ladybug

The process of changing from an egg into a ladybug can take as little as twenty-four days.

This is where it all start. In the mating process, the male ladybug will mount the female from behind. The male will likely be smaller than the female.

The female then lays the fertilized eggs.

Ladybugs lay hundreds of tiny yellow eggs in colonies of aphids. This is to ensure that the baby ladybugs have a ready food source when they hatch. The tiny golden yellow eggs look like miniature jelly beans and are usually laid on the undersides of leaves to protect them from predators and the weather. The eggs are only a millimeter in length and the numbers can range from a few to several hundreds, depending on the condition. When conditions are harsh, the ladybug will lay many eggs that are infertile. The infertile eggs will become food for the lucky ones that hatch before they start searching for live prey.

The ladybug eggs are beginning to develop into larvae. Their distinctive pattern of the larvae can be seen through the translucent eggs.

After 5 days, the eggs turn white and the six-legged larvae will crawl out of the eggs and start devouring as many aphids as they can.The ladybug larva is about the size of a pinhead. It is long and dark with orange markings on its spikey backs with three pairs of prominent legs, growing to 7-8 mm in length. It also has a tiny sucker at the end of its body. This is a far cry from the cute appearance of the adult ladybug.

After the larvae have feasted on aphids and grown, they will attach themselves to a leaf and pupate. At this stage, the pupa will begin to look like a shrimp. The larva wil grow and eat about 30 aphids a day and then molt or shed its skin at least three times during its growth. It must shed its skin because the skin will not stretch to fit its growing larval body. After molting, the new skin is gray with patches of orange.

In this photo, there are two pupae and three larvae waiting for their turn to pupate.

These three ladybug pupae are beginning to look like the adult ladybug with the bright colors and distinctive spots, but without the glossy, hard domed shells. Inside the case of the pupa, many changes are taking place. Its body gets shorter and arches. Its skin thickens, and it sprouts wings. It is turning into a ladybug, but it is still hidden under the case. The changes take about five days, and then the ladybug pushes its way out of the case.

"I'm out of here" exclaims the ladybug as it pushes itself out of its casing.

The golden-colored ladybird beetle examines the casing from which it emerged from its pupa stage. When it emerges, it is completely soft and its exoskeleton and elytra must harden. The ladybug stays hidden until its wing cases and hind wings are dry and hard. At first it is a pale yellowish color and slowly turns orange and then red. Spots also begin to appear on the ladybug while its wings are drying, usually after 24 hours.

After a couple of hours, the yellow color slowly changed to orange and the black spots begin to shine through.

By now, the orange or red color with black spots have transformed this ladybug into its iconic image.

Behold the adult ladybug in all its splendor!

This ladybug is all grown up and ready to take off. When it flies, the ladybug beats its wings for approximately 85 times in a second.

Brunch on a branch

Aphids are a ladybug's favorite food. Also on the menu are small insects such as whitefly, mealybugs, scales, mites, bollworm, broccoli worm, tomato hornworm and cabbage moth. They will also eat the eggs of some insects such as moth eggs and certain ladybugs eat pollen and mildew. Rarely but if necessary a ladybug may resort to cannibalism.

This rosebush teeming with aphids has an "All-you-can-eat sign" on it for this voracious ladybug. By the end of its three-to-six week life, a ladybug may eat some 5,000 aphids.

Here is as closeup of a hungry Asian Ladybug having an aphid for a snack. This is just an appetizer.

The wild colors of this little beetle give it a threatening look to keep it off limits to predators. Nature works in wondrous ways.

There are 5000 different species of ladybugs that can be found around the globe.

The number of spots, pattern of markings on the wings and the color will help in identifying the type of ladybug. Not all lady bugs have round spots on their bodies, some even have white stripes instead of black spots. The bright colors of the ladybugs help them in distracting the birds from eating them.

This ladybug is the center of attraction of this yellow daisy without having to try very hard.

The bright orange shell of the ladybird against the brown spent flowers looks like Fall is coming our way. This ladybug looks like a spotted pumpkin at a Harvest Festival.

Cute as a bug!

This orange and black ladybug is all over the pretty fireweed.

Red against the goldenrod flowers make this "lady" eye-catching.

How do ladybugs keep warm in the winter?

When the weather begins to turn cold, ladybugs look for shelter. During the winter, they rest quietly and this period is called diapause.

Ladybugs huddle together under rocks, leaves, or tree barks during diapause. During diapause, the ladybugs do not grow which give insects like these a chance to survive when food is scarce. They can go without food for 9 months during diapause.

The adult Convergent Ladybug may spend the winter in protected hiding places such as logs, buildings, and ground covering vegetation, where many of them cluster together. Some may find an opening in a house and rest there during the winter. In the early spring, they begin looking for food again and soon females will once again lay eggs.

A ladybug's spots fade with age.

The spots on the wings of a ladybug fade as it gets older. Wish this were true for humans- begone sun spots and liver spots!

Ubiquitous is the word.

People all over the world love ladybugs. This cute little critter can be seen in every imaginable merchandise from clothing, toys, jewelry, puppets, costumes, baked goods, postage stamps, mouse pads, kitchen and home decor and many many more. The possibilities are endless.

Google it, and you will find it.

Get nailed with ladybugs! These ladybug-themed nails will definitely get you noticed.

Ladybugs have been gracing cakes, cupcakes and cookies for as long as anyone can remember. They are one of the few insects that will put a smile on your face when you see them on anything edible, especially sweets and desserts.

Make your next party memorable by throwing a ladybug-themed event. Start with the invitations, table setting, and finish off with the lady bug desserts. 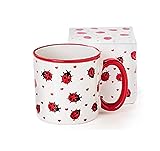 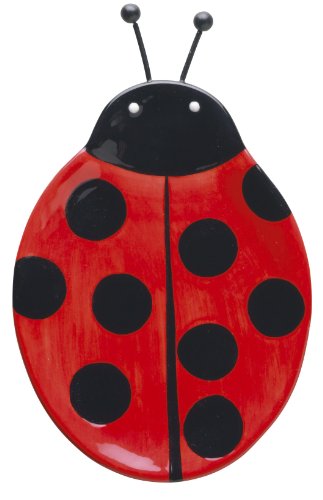 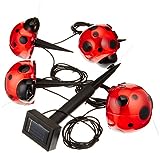 Are You a Ladybug?

On May 29, 2012, this lens was bestowed a Purple Star Award. I wholeheartedly thank the lensmaster who nominated this lens to be worthy of this honor.

What do you think of ladybugs.

After reading this lens and learning a few things about ladybugs, ladybirds, ladybird beetles, do you feel you like them more now?

Are you a ladybug fan? If not, have you become one? - I cannot wait to hear from you.