Get the MP3 Playing Doorbell

Looking for a fun doorbell? Get the wireless doorbell that plays whatever music or sounds you'd like!

You can set it to play "Ring My Bell" whenever someone presses it. Or have it play screams or laughter! Or whatever song you love right now. All you have to do is add MP3s of whatever songs and sounds you'd like the doorbell to play.

Not only that, but this wireless doorbell it easy to install and you can move the speaker to wherever you are, even into the backyard. The MP3 playing doorbell even makes the prefect gift!

The Basics of the MP3 Playing Doorbell

This doorbell is designed to play songs instead of the plain old boring chimes when someone rings your bell.

Just as you can change your ringtone on your phone, it's now super easy to change the sound this doorbell makes. Plus this doorbell is wireless, so it can be mounted in places where you normally couldn't place a doorbell or on rental units.

Get the MP3 Playing Doorbell Now 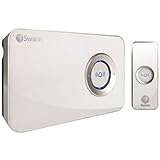 There are two pieces to the doorbell unit.

One is the doorbell itself. It is backed with double-sided tape so you can easily stick it by your front door. When pressed, it sends a wireless signal to the speaker unit, causing it to play whatever song or songs you have programmed.

The speaker unit can be placed wherever you like inside your home, up to 330ft away from the doorbell piece, and can either be mounted to a wall or just left on the edge of your desk or bookshelf. This makes the MP3 playing doorbell especially great for renters since there is no need to drill for wires or permanently mount it.

That's all there is to it, installation is ridiculously easy.

See the Doorbell in Action

Front of the Speaker

Back of the Speaker

uses 3 AA batteries. So make sure you pick them up or you your doorbell won't be playing any sweet music. 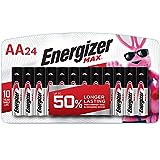 The MP3 playing doorbell is designed to play whatever MP3s you wish, though it has some built-in tones too if somehow you get tired of listening to music.

You can add nearly as many songs as you wish to the doorbell. Slide an SD card into the speaker (SD card not included), you can use anything from a 2GB card (which can hold about 500 songs) to a 32GB SD card (which can store up to 10,000 songs), and just plug the speaker into your computer using the included USB cable. Drag and drop the songs you want into speaker, then disconnect. Now when someone presses the doorbell, the songs will play from the speaker.

The MP3 playing doorbell's volume is adjustable, and unlike many doorbells, you can place the speaker wherever you want so it's always easy to hear. You can even take it into the backyard with you when having a bbq so you never miss a guest.

The doorbell unit comes with software to trim down your songs if you wish so you can just play the parts that you like. The software only works with Windows based PCS though. Not a worry if you're a Mac user though, there are plenty of music editing programs available out there.

The doorbell is not connected to your home's wiring, so all it needs to run are 3 AA batteries for the speaker and the special battery included in the doorbell itself.

Get the Wireless MP3 Doorbell Now 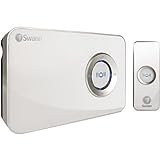 What Do You Think of the Doorbell?

Pay Less for a mp3 Doorbell

The doorbell below still allows you to play mp3s, but is much cheaper. Check it out if you want to have this fun idea but don't want to spend as much.