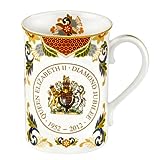 Royal Worcester Queen Elizabeth II Diamond Jubilee Mug
This is a lovely tall slim mug, appropriately elegant with the Queen's coat of arms on it, with a 10-ounce capacity. A beautiful bone china gift for the monarchist in your life. Made in England, of course.
Buy Now

The Story of Royal Worcester

Royal Worcester traces its history back to the mid-18th century, when founders Dr John Wall and William Davis began to experiment with methods to produce fine porcelain - a product that had previously been imported from the Far East and that only the very wealthy could afford to own. They rounded up a dozen investors and in 1751 set up The Worcester Tonquin Manufactory on the banks of the Severn river in Worcester, UK.

In 1789, King George III awarded the company a Royal Warrant, giving the company the privilege of producing porcelain for the royal family. Royal Warrants were also issued by the Prince of Wales, in 1807,and the Princess of Wales, in 1808. After a bit of a shaky period during the mid-1800s, Worcester Royal Porcelain regained its international reputation for the quality and beauty of its products during the Victorian era, as new decorative techniques such as printing on china were developed in Worcester.

More than 250 years after its establishment and having survived a number of hits to the luxury market, Royal Worcester, now part of the Portmeirion Group and located in Staffordshire, continues to produce some of the world's finest porcelain and is still in service to the crown, by appointment to Her Majesty Queen Elizabeth II.

Wheelers Luxury Gifts of Leicestershire, UK, carries the full line of Royal Worcester Diamond Jubilee commemorative china and will ship worldwide, as does Goviers of Sidmouth, Devon, UK, specialists in royal commemoratives - among other fine retailers. In the Diamond Jubilee Royal Worcester line, you'll find the following pieces, here listed with current retail prices in pounds sterling. Prices may be subject to change.

The former Severn Street factory of Royal Worcester - occupied by the company for 160 years - is now the site of the Worcester Porcelain Museum, owned and operated by the Dyson Perrins Museum Trust. It boasts the largest collection of Worcester porcelain in the world, including some items dating back to the company's formation in 1751 and an especially impressive collection of Victorian-era pieces.

Visit the museum's website at www.worcesterporcelainmuseum.org.uk for a comprehensive history of this iconic company, and more information about the museum's programs and collections.

Are you a china collector? - How will you commemorate the Diamond Jubilee?