The Joy of Less by Francine Jay: Decluttering Best-Seller

I've always been a keen reader and have so many books that I couldn't hope to read them all in my lifetime. I love being surrounded by them

This book by Francine Jay is well written and easy to read, with lots of helpful ideas, and a minimalist ideology which you can adapt to your own way of life--you don't need to follow it blindly--just take the bits that appeal to you.

In the author's own words "The Joy of Less makes decluttering easy, enjoyable, and empowering". She states that many of her readers tell her that rather than finding decluttering a chore, they become excited about it and once they actually learn to let go, the results can be life-changing.

My own experience after reading the book is that even using just some of the small steps recommended left me feeling better, and so enthusiastic that I wanted to recommend it to other people who, like me, love hoarding things. I'm not an Obsessive Compulsive hoarder, but I do tend to hang on to things when I have no use for them, just in case I might need them at a later date.

Here's What You'll Learn From This Book About Decluttering

An Accidental Opportunity to Declutter

Before I had even finished reading this book, my eyes were opened to its possibilities:

Not long after reading a chapter, I had a disastrous day when I couldn't stop spilling things or knocking them over. It started when I accidentally broke a raw egg, which dripped all over my open kitchen drawer. Normally I would just have mopped the place where the egg spilt, but, mindful of Francine Jay's advice, I duly emptied the complete contents of the drawer out on my kitchen counter, thoroughly mopped out the whole drawer, and put back only the items which I use regularly.

I surprised myself by sorting out quite a large pile of utensils which I had not used for years.

I put them in the dishwasher and gave them a clean-up, so that they looked as good as they would ever look, and my plan was to take them to a charity shop, after first letting my daughter select any she wanted. I was quite proud of myself.

All this came after reading one random chapter in the middle of the book.

After reading about a quarter of the book my enthusiasm for decluttering was boundless.

This is strange, because I am a self-confessed hoarder.

I looked around for more easy things to clear from the house, and started on my empty bottle collection. I keep them to store all sorts of things I have made, such as pickles or chilli prawns and also to decant packets of dry food, once they have been opened. I hate being in a situation where I need a bottle urgently, and there are none to hand. But I myself am completely out of hand when it comes to moderation, and I can't bear to throw containers away. So this was a big test for me. You'll see part of my collection of bottles in the photograph below.

My son jeered, saying "just throw them in the rubbish bin, Mum, nobody could possibly want someone else's old bottles", but I knew otherwise.

My daughter was delighted to take some of the jars for her jam-making sessions so I boxed up the most suitable ones for her, using one of my large number of hoarded cardboard boxes and thus killing two birds with one stone. I was happy that they would be used, and felt no pain about parting with them.

Then I advertised on a local community website that I was giving away bottles and three people immediately replied with requests. It was a bit time-consuming, with emails backwards and forwards, and eventually I left them on my porch for one lucky person to collect. My saucy son sneaked the bottles away and dumped them by my waste bins behind my back, but I found them, and carried them back to my porch. By the following day they had been collected by someone who wanted them, and I felt very comforted that I had not thrown them away and it gave me the strength to look around for the next step in de-cluttering.

Through reading The Joy of Less, I have found that giving my belongings away is a far pleasanter way of parting with my hoarded possessions than simply binning them. Even before I had finished reading the book, I was impressed by the fact that I already felt greatly encouraged to sort out my home and to stop hoarding junk. 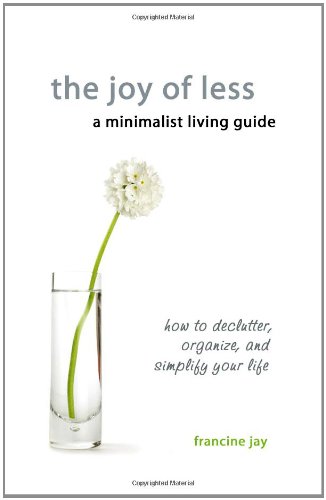 The Joy of Less, A Minimalist Living Guide: How to Declutter, Organize, and Simplify Your Life
This book would make a good present--easy to read, lots of helpful ideas, and it might just permanently change the way you organize your belongings.
Buy Now

Are You a Hoarder? Take This Poll

Do You Find it Difficult to Let Go of Possessions You Don't Use or Even Like?