Devin Townsend : Who is he?

Devin Garret Townsend was born on May 5th 1972 near British Colombia, Vancouver. Devin is a multi-instrumentalist musicien, vocalist and producer. He was the founding member of the extreme heavy metal outfit that was Strapping Young Lad (defunct in 2007). He went on to produce a catalogue of engaging original material on his solo project, named 'The Devin Townsend Band'. He is currently at work on not one but four new albums of varying musical styles, which will be released under the name 'Devin Townsend Projects' (according to official notice on February 2009). A musicien of prodigal creativity and style, he is a great influence on many metal musiciens and has a vast and dedicated army of followers.

Devin's musical career began in 1993 when he was asked to perform lead vocals on Steve Vai's album, "Sex and Religion". He toured briefly with the band before becoming disolusioned with what he found in the music industry. In reaction to this he wrote a number of songs on a solo project under the name 'Strapping Young Lad'. He soon formed a band, with this name.

The first album they produced was released in 2007, under the name ''Heavy as a Really Heavy Thing". This album was commented upon as being one of the most disturbing things you could hear.

The second album was entitled "City" and was highly critically acclaimed and is regarded as the bands greatest work.

In conjunction with the release of City, Devin released a second album under his own name, which was the product of a solo project. This album was entitled, Ocean Machine. Devin continued with this pattern, releasing two albums consecutively, one from SYL and one a solo venture.

In 1997, Devin had recruited permanent members for Strapping Young Lad. This line-up, consisted of Devin on vocals and guitar, Jed Simon on guitar, Byron Stroud on bass guitar, and famous metal man Gene Hoglan on drums. This line up remained constant until the bands dissolution in 2007.

Devin Townsend's personal battle with bipolar disorder has impacted heavily upon the lyrics and the musical style. Though that is not to say the band is without a huge sense of humour and fun. Devin has explained the vast differences in musical style between Strapping Young Lad (SYL) and the Devin Townsend Band (DTB) as being related to his illness. Manic Depression or Bipolar Disorder is characterised by huge swings in mood from elation and mania to depression and despair. SYL is the product of the 'dark' days, while  DTB celebrates the mania aspect of his illness. Devin was briefly hospitalised in 2007 following a mental breakdown, after he was released he produced Infinity. 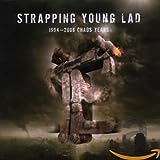 At the end of 2008 SYL were put on hold while Devin worked on his solo career. During this time he produced two more solo albums, Physicist, (generally regarded as the lowest point in Devin's career), in 2000 and Terria in 2001, He also produced albums for Zimmers Hole, Stuck Mojo and Soilwork. During this time SYL gave a few live performances including a gig with Fear Factory.

Following the attacks of September 11th, Devin was sparked into a new creative phase, with the self titled album Strapping Young Lad being released in 2003. It was received well critically, but regarded as inferior to City. The musical style employed in City was more industrial, while the self titled album had a more death metal quality to it.

Alien was released on March 22, 2005, and it sold an amazing 3,697 copies in its first week. reaching number thirty two on the Billboard Top Heatseekers chart, and number thirty five on the Top Independent Album chart. This album was received with great enthusiasm, with critics and fans alike considering SYL as "back on form". In preparation for the recording of Alien, Devin had stopped taking his prescribed medication for his mental illness. He explained the need for creativity, and having to accept all that came with it.

Their final studio album was released in 2007 under the name The New Black. It achieved even greater success than Alien, and was completed prior to the bands tour which including playing Ozzfest festival and Download festival. SYL released a DVD of their outstanding live performance at Download. Devin is known for his stage prescence and crowd interaction making memorable perfomances, full of boundless energy and vitalism.

In 2007 and 2008 Devin produced several albums including Zimmer Holes third studio album. He also lent his voice to several characters in the Adult Swin cartoon Metalocalypse.

Devin communicates regularly with his fans through his official message board, and has given updates about the status of his next solo project, about which he has said " sometimes i think it's brilliant, sometimes it freaks me out." He has since retreated to Northern Canada to begin recording.

Fans and critics alike are eagerly awaiting the next works of the prodigal Devin Townsend.