How to strengthen your back in a mobile environment

In my main article on how to strengthen your back just by sitting, I make the case for why you should sit on a Swiss ball rather than a chair, especially in the work environment. However, there are those times when a Swiss ball is either impractical or inappropriate.

Sissel, the only brand I have used, has come out with the Sissel SitFit-Ergo Sit. It is a redesign of the original SitFit (that I have used for as long as I have used the Swiss ball) and resembles a flattened Swiss ball.

The SitFit-Ergo Sit is the portable version of the Swiss ball. It promotes instability while sitting, which is great for those long boring meetings. You don't feel as fatigued, plus you strengthen your muscles.

One key advantage is that it adds a couple of inches to your sitting height, which can elevate your hips above your knees, the optimal position for sitting. 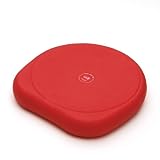 Swiss Ball versus SitFit-Ergo Sit in the work environment

The advantages of the SitFi-Ergo Sit over the Swiss ball include:

The advantages of the Swiss ball over the SitFit-Ergo Sit include:

Bottom line: Sit on the Swiss ball as much as possible, using the SitFit-Ergo Sit when you must. By having both the Swiss ball and the SitFit, you maximize the time spent sitting on an unstable seating device.

Other uses of the SitFit-Ergo Sit

There are several other uses of this small inflatable cushion:

The SitFit-Ergo Sit is good for a lower back cushion, when you absolutely feel like slouching during a long boring meeting. Its squishy shape conforms reasonably well to the space between your lower back and the back of the chair.

My aging car seat began to deteriorate to the point where the left side was lower than the right. I began to experience back pain. As soon as I put the cushion on the seat, the pain went away because now I was no longer unbalanced.

Note that this is different from a regular cushion, which would still be slanted. The inflatable characteristic enabled me to stay more level. Before I got the SitFit, I tried a regular cushion with no success at alleviating the pain.

An additional benefit is that I got a few more inches of height in the car, which is a good thing to have.

The SitFit doubles easily as a pillow for those power naps at the office. Now you won't have to run the risk of getting "keyboard face" where the indentation of the keys leave an imprint on your face which has been resting on it.

Care and feeding of a SitFit

SitFits are pretty much inflate and forget. There is hardly any deflation of the SitFit and it will last years on one inflation.

Soap water was the most I ever used to clean off the dirt.

The most important aspect of SitFit care is keeping it away from extreme heat, namely in a car on a hot summer day. The strength characteristics may be altered for the worse after prolonged baking.

SitFits, like any inflatable device, come underinflated to save on shipping costs. While it is easy to inflate a Swiss ball to its proper inflation level (hips slightly higher than knees), the SitFit is a bit more difficult. It comes down to preference and how long you can sit on it before tiring.

You will need to play around with various inflation levels and decide which is right for you. The good thing is that there are no wrong levels.