20 Great Tips - Household Items Have More Than One Use, Which Saves Money, Too

Don't buy equipment that does only one thing

Sometimes we fall into the habit of buying something special for every single purpose. That's why thrift stores are overloaded with salad spinners and fondue sets.

But we don't have to clutter our houses with single-use items. We can even use things that we would normally discard. 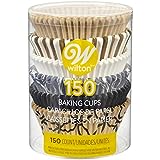 20 tips for using what you already have around the house

1. If you're painting a wall or enameling wood trim, and want to take a break, instead of washing out the paintbrush, cover it tightly with plastic, and, if necessary, secure it with a rubber band. If you're using a roller, a piece of saran wrap or dry cleaner bag will cover it. Then the brush or roller will still be wet and ready to use later in the day, or even the next day.

3. If you have cupcake liners around, they have 3 great uses:

- If you're serving cold drinks outside, you can easily keep the bugs out of your glasses. Cut a small hole in the middle of a cupcake liner and put the liner inverted over the straw and the top of the glass. You'll be able to drink the cold drink through the straw and keep bugs out at the same time.

- If you're serving popsicles or ice cream treats on a stick, put a small slit in the middle of the cupcake liner and put the wooden popsicle stick through the hole so the liner catches any drips from the ice cream or popsicle.

- If you're serving cake and ice cream for a party, put the cupcake liners in a muffin pan, put a scoop or two of ice cream in each one, and freeze them. Then serve them with the cake. This saves you the time and mess of scooping the ice cream while you're serving the cake.

Tips for ears in the garden and out.

4. If you have garden seeds left over from previous years and really liked the vegetables that grew, you may still be able to use the remaining seeds this year.

If you aren't sure that they're still viable, place them between two folded, damp paper towels in a flat container. Put a lid on it and set it aside. Check it daily to make sure the paper towel stays damp, and sprinkle water over the towel as needed. (Be sure that you don't add so much water that the seeds are standing in any water.) Peek at the seeds after a few days to see if there is any sprouting.

To know how long it should take for the seeds to sprout, check the seed packet for the expected sprouting time, then take a few days off that time, because you don't want leaves or roots, you just want to see if the seeds are viable before planting them.

5. If you have trouble hearing your cell phone at home when it rings, place it in a small glass bowl on a hard surface. The bowl will amplify the ringing sound.

6. If you've lost an earring or other small item, wrap a piece of nylon or other very thin stocking across the end of your vacuum cleaner hose, and secure it with a rubber band. Then vacuum the area where you think that you lost the item. When you find it, it will be held against the fabric by the suction, but won't be sucked into the vacuum. This also works great if you have craft projects that have many small pieces, like beads or small diamond pieces that need to be picked up from your craft area.

Tips for cooking, and for cleaning glassware

7. Freeze fresh herbs, cut hot peppers, green onions, etc. on a cookie sheet, then put them into a container that you can shake out as you need them for cooking. (Store the container in the freezer to keep the cut vegetables and herbs fresh.) If you need a little basil in the middle of winter, you've frozen it, and you can shake it out onto your pasta. Yummy!

8. Prevent a pan of noodles or other pasta from boiling over by laying a wooden spoon across the top of the pan. Or you could add a teaspoon of oil to the water. Both methods work.

9. Do you have a glass container that needs cleaned, but it has a neck too small for even a bottle brush? Fill it halfway with hot water. Then add dish soap, a little white vinegar, and uncooked rice. Cover the top and swirl the dry rice with the liquids around until the glass container is clean.

10. To prevent cilantro, parsley, oregano, sage and other fresh herbs from wilting right away in the refrigerator, put them in a container with water, as if they were flowers, before you store them in the refrigerator. Trim the stalks a bit when you take them out to use the greens, and put them back in the fridge with fresh water. I do this mostly with cilantro, and it stays fresh for up to two weeks. If you have cut celery stalks, it also works on them. (If you want to keep basil fresh longer, put it in a container with water, but don't put it in the refrigerator.)

Lemons have a lot of uses, right down to the last bit of rind.

Throw things out only after they are no longer useful

11. Keep lemons handy. They are great for seasoning food, flavoring a glass of water and providing diuretic action. They can also be used to freshen a cutting board before putting it away. When you're done with the lemon, you can remove the pulp and let the rind dry. Then grind up the rind in a coffee or spice mill. Put the ground up rind in a shaker container and use it as seasoning. Or you can cut the used lemon into pieces and drop it into the garbage disposal. As the lemon is being ground up, it will freshen the garbage disposal.

13. If you travel, save the shower caps that are provided in hotel and motel rooms. Each one makes a great bag for storing shoes. You can use them to cover shoes in your suitcase without getting other clothes dirty.

14. Use bread wrapper tags to label the cords of your electronics. Write "printer", "monitor" , "TV", etc. on the tag and clip the tag around the cord next to the plug-in. Then you'll know exactly which is which if you have to unplug one of them, without having to trace it back to the source - or, worse yet, unplugging the wrong one. This especially comes in handy if the power-strip plug-ins are under a desk or behind a piece of furniture.

Flowers can stay fresh longer than you expect

15. To keep flowers fresh longer, add aspirin to the water. Also, you can cut the stem off a little each day to keep fresh stem ends in contact with the water, and replace the water every day or two. With these methods, the flowers should last up to twice as long.

16. Use a lint roller for picking up other items, like slivers of broken glass, glitter and crumbs.

17. If you hang up a dress or blouse with spaghetti straps, and they slip off the hanger, wrap a rubber band around the ends of the hanger and the straps won't slip off again.
18. When you're hammering a nail into something, slide a comb onto the nail so the nail is held in place between the teeth of the comb. Then hold the comb instead of the nail. It saves your fingers from being mashed (well, at least if you're as bad with a hammer as I am).

How many windows do you clean?

Tips for un-sticking and washing windows

20. When you're cleaning windows, do it on a cloudy day or on the shady side of the house so streaks won't dry quickly. Then wash the windows up and down on the inside, and side to side on the outside. (Sounds like Karate Kid doesn't it?). That way, if a streak shows up, you'll know which side of the glass it's on. Microfiber cloth works great on windows, because it has no lint. (Newspapers also work great for the same reason - no lint. However, you have to deal with ink.)

A great non-toxic formula for cleaning windows:
In a spray bottle, combine