As I follow the plight of baby boomers in the news, I must admit to feeling smug. As a Generation X-er who grew up without the financial advantages many baby boomers enjoyed in their younger years, I can't help but snort every time I hear of a baby boomer losing his or her financial cushion just as retirement approaches.

Not because I don't have sympathy for them. Au contraire, I have a deep empathy for baby boomers who've lost their nest eggs despite having every reason to think they were safe and secure. Nobody knows better than a card-carrying member of Generation X--except I guess a similarly accredited representative of Generation Y--what it feels like to be plunged into an economic crisis that's utterly beyond one's control.

After all, haven't we of Gen X been dealing with an economic downturn in the job market that's been going on since the late '80's, when baby boomers basically had all the jobs we wanted, causing us to drift back home to live and earn the unwanted attributes lazy, unmotivated, loser, failure, leech...?

Generation X knows intimately what it's like to start out our careers without a penny of seed money...to bang our heads against the wall in a job market that requires experience as soon as we enter it...to apply for jobs for which there are hundreds of better-qualified applicants...to have fancy degrees tacked onto our names yet still end up working the cash register.

We know we have a work ethic; it was the rest of the world that didn't know it, probably because we're this small a part of the population. 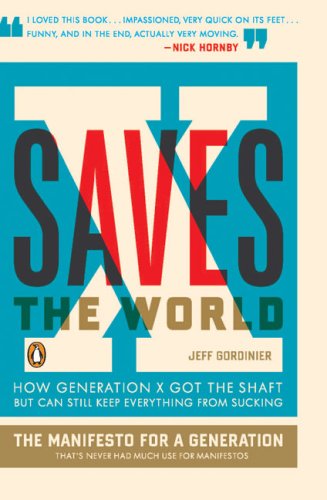 X Saves the World: How Generation X Got the Shaft but Can Still Keep Everything from Sucking
Buy Now

The smugness comes, once again, not because I don't care or don't like baby boomers (would you believe me if I said that some of my best friends are boomers?) I'm feeling smug because I'm reading that some members of the Baby Boomer Generation are feeling thunderstruck by the "new" crisis. They're suddenly and acutely feeling the financial pinch, and they're looking around wondering what to do now. These are the people who were advising their children how to succeed and unsympathetic when they failed. Now, at last, we're in the position to advise them on financial survival with the weight of all our experience of swimming against the tides of economic opportunity.

Although to be honest, I don't feel it will help. After all, we Gen Xers got plenty of advice from our parents and teachers, and it didn't do much for our financial ranking. Advice on how to achieve financial security in a sinking economy (and it's been sinking far longer than most realize) is good for a cup of cappuccino at the gas station, but not much else.

Generation We: How Millennial Youth are Taking Over America And Changing Our World Forever
Buy Now

Uh Oh, Toto, We're Not in a Boom Time Anymore

The Difference Between the Baby Boomer Generation and the X Generation

A goodly cohort of baby boomers grew up floating on the financial cushion of Depression-era parents who'd made enough money for comfort and thriftily kept healthy sums in the bank. These people's children grew up in an economic boom time, when, even if their parents threw them out cooly into the job market, and admittedly some did, the jobs were there for the taking and their pure masses floated the economy.

The baby boomers enjoyed the luxury of choosing a self-actualizing career and in fact they made it de rigueur. As parents and as teachers, they taught us, Generation X, that we, too, could choose any career we wanted...in fact, we could even have kids when we wanted, there's no hurry...but most of all, we could succeed if we only tried, as they did. We could have it all.

What they didn't tell us was that yes, we could have it all...as soon as they were done with it.

Now the baby boomers are ready to exit the job market, they're finding, to their chagrin, that they can't afford it. Many boomers are having to delay retirement and remain in, or re-enter, the workplace, often several pay levels below their former exit. And that wasn't their plan. That this has happened doesn't make me happy, but it doesn't surprise me, either. Welcome to our world.

Not all baby boomers are suffering, by any means. Many thrive--just as you can find a goodly number of Generation X'ers and Generation Y'zers (pun intended) sailing into the failing economy with heedless smiles. In any group, there are individual exceptions to the rule. And sometimes the ones who are suffering now are the ones who have suffered their whole lives - my parents were an example.  But as a group, the baby boomer's ethos of work-well-consume-well is failing to carry them into retirement.

It wasn't their fault. They're saying it and I'm saying it, too.

But when I hear accounts of the "tragic" situation of the hard-hit baby boomers, I hear the undercurrent of the very same "feeling of entitlement" of which the baby boomers have accused members of Gen X and Gen Y.

I really hope that this means that the baby boomers will now take another look at the generations that followed them and that hindsight will bring wisdom.  The world is changing, and we're all of us - all generations - being swept up in the tide.

Disclaimer: For the record, I'm not saying baby boomers ruined the country or were responsible for everything wrong in the world. And no sweeping statement about ANY group of people says anything about any one individual member of that group. I know plenty of baby boomers who were not, themselves, smug about their own success, and many members of Generation X who were. In the glorious tradition of statistical analyses, yet using none of those pesky hard numbers, only my own anecdotal experiences, I'm discussing my impression of trends I see, not individuals.

Whether you're a baby boomer or member of one of the younger generations...please say your piece in the Comments section. Just try to keep it decent and play nice. This is a volatile subject, you see. Recently, I saw this book on Amazon called

Why Baby Boomers Suck: No Offense Mom and I've been blown away by how angry people are really feeling about this subject. (Disclaimer Within Disclaimer - that is an affiliate link, meaning if you go to Amazon through the link, I might get commissions on stuff you buy - oh, boy!)

Poll: Are You a Baby Boomer?

Poll: Are You a Member of Generation X?

If you were born from 1961 to 1975-ish, what are your feelings about work and retirement?

Poll: Are You a Member of Generation Y?

If you were born after 1976-ish, what are your feelings about work opportunities and retirement?

Hey, check out this fascinating op-ed piece from June 22, 2012 in the New York Times about the current generation gap. Some interesting facts and opinions here...