The World's Most Perfect Food?

Since just after the dawn of man and just before the first Super Bowl, sentient humans have searched for ultimate snack foods to complement bleu-cheese dip and guacamole. Doritos represents man's pinnacle of salty corn-based hand-held dippable TV-compatible edibles. Vast arrays of flavors, from original to extra salty, can be acquired at major supermarket chains across the planet. Bags of Doritos fly off shelves 24 hours a day into shopping carts bulging with discount soda pop and frozen pizzas.

We salute the grandest snacking invention since the disposable napkin. Doritos have earned their rightful place among life's necessities. How did this happen? We don't know for sure, but we can certainly speculate because this is supposed to be funny anyway and the true story probably involves boring food engineers and dull focus groups. 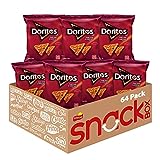 Scientists speculate as to the origin of Original Flavored Doritos. These scientists are widely discounted because they seldom get invited to the kinds of parties that serve Doritos anyway. For better or worse, extensive research indicates that early relatives of Doritos washed up on the oily shores of Precambrian oceans. They slowly evolved into the popular triangular shape that has proven so amenable to dipping. Their evolutionary process took a long time but was facilitated by a scientifically impossible high salt content: the things just wouldn't decompose. 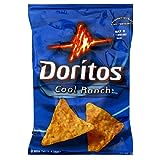 Evidence found deep beneath a 7-11 in Pomona indicates that an early strain of Dorito mated with a mutant fruit roll-up. The improbable result proved to be a precursor to several of the more popular Dorito flavors that we all enjoy to this day. The beginnings of the 'tos' family of portable foods was beginning to begin. Doritos, Frito's, and Cheetos were forming storm clouds on the nutritional horizon.

Hundreds of years ago, tribes of roaming corn farmers dotted prairies from Tatertot, Idaho to Constipation, New Mexico. These dedicated but restless agrarians searched endlessly for rich loamy bottom-land and reliable cell phone coverage. They carried with them recipes for spicy snack foods, passed down from father to son and mother to daughter. They heard rumors of triangular corn concoctions that would go really well with their family heirlooms, but rarely did they get opportunities to kitchen-test their recipes because the government insisted on buying up all the corn to make into ethanol-based fuels. A few brave Libertarian farmers broke away from the pack. They secreted some of their corn harvest from the prying eyes of the USDA and combined their spices with their maize: modern Doritos were born.

Every year millions of otherwise dysfunctional families gather together in front of massive flat screen televisions to share the joy of the Super Bowl commercials interspersed with a football game. This trend was causing the economy to trend downward. Caviar and Perrier were simply too expensive to serve. Hosts were mortgaging their homes to provide sufficient quantities of foodstuffs for their guests. A housing bubble was forming. More and more money was borrowed to purchase bigger televisions and elaborate meals.

A tipping point was reached when supermarkets in Washington, DC ran out of fish eggs. Congress swung into action. Dedicated legislators legislated massive Dorito subsidies to ensure that no Super Bowl viewer would every go hungry again. Huge underground stockpiles of spice and corn were established in huge underground bunkers that formerly contained strategic oil reserves. Never again would a father have to look his young son in the eye and say "The score is tied with two minutes left in the game, and we are out of Doritos. Go to bed."

Give thanks that you live in a Doritos world. Your parents had to walk uphill in a snowstorm to buy 1.75 ounce bags with expired sell-by dates, and they only had the Original Flavor to choose from.