Shop in style using your phone?

High street stores are on the retreat. In the UK, in many towns, shops are shutting down to be replaced by coffee and charity shops or thrift stores, recycling second hand goods in the process. M&S a darling in the UK high street alongside John Lewis Plc (who also own the food chain Waitrose) have seen sales decreases not by millions but by hundreds of millions. M&S is reported to be down £~500 million. As the London Times reports from May 23 2019:

"Marks & Spencer has played down the impact of falling out of the FTSE 100 for the first time in its history after another sharp fall in its share price left it teetering on the brink of tumbling out of the index of Britain’s biggest listed companies.

More than £410 million was wiped off the value of the high street retailer yesterday after its shares dropped by 25½p, or 9.4 per cent, to 245¾p amid the news of a near-10 per cent decline in annual profits ..."

This translates to losses in revenue, losses in staff and losses of branches on the high street. M&S are closing their less profitable branches across swathes of the UK.

They have however also invested £500 million into building a website for online shoppers. Before 2014, they had partnered with Amazon.com but have since gone independent with these web services including an application (app). The same goes for the catalogue company Argos. Formerly, they kept the bulk of their stock behind the scenes at a warehouse style store with items available more or less instantly at store after ordering and paying from their printed catalogue. Now, you can order things through their app and collect, sometimes on the same day or usually about 3-4 days later at the store. It can take time to prepare items ready for collection. This applies to M&S and a number of other department stores that have declined on the high street. Even brands that sold through stores but had a limited high street presence such as Evans are doing the same. You set up a personal account with a payment system, you look at the catalogue online (using an app), read the reviews and order. A few days later, collect at a convenient store or outlet. Amazon is being copied across the board. Many of the app functionality at the time of writing is not as sophisticated as Amazon.

But there are differences from Amazon that can sweeten the experience. Postage is often free, since the item is delivered to the outlet – usually a shop, and you collect. If you don’t collect the item within 7-10 days, they will be automatically returned, and you will get a full refund. Minutes after purchase or within a few days, you can also return the item/s for a full refund as long as certain conditions are met. With Amazon postage and returns are not quite as cost free. Shoppers can save lot of time, energy and expense that could have been spent travelling, parking and physical browsing (not to mention time dressing up and putting on her make-up as one hub-page writer explained).

Sooner or later, some of these shops could dwindle in size while maintaining their shell for perishable items not so suitable for app shopping like food, drink or coffee. Most shoppers will join a queue to collect the items they’ve ordered via the app and sales consultants will have less intense work, scanning order references and getting sealed packages for individual customers, like from a post office warehouse that stores items that couldn’t be delivered via your post box. Of course, somebody somewhere will also have to put together your order and wrap it up, before sending it to that store.

Online shopping could prove quite attractive to businesses. Gone are the days when they had to keep in stock all sizes of a particular shoe, including colour variations. They can now afford to build in a lag of up to 3 weeks from the time of order, and theoretically get an item manufactured per order and delivered, thus slashing the number of units they had to acquire into their warehouse. Their storage costs may go down though they could still feature the same diversity of goods.

Shoppers may not enjoy not getting items instantly, but cost savings will be passed from businesses to customers. Instead of waiting for seasonal sales, certain items will vary by price on the app with dramatic price reductions if customers had lodged an interest in the item in advance. If a certain item in the business warehouse is not shifting, then discounting the item on the app, will avoid wastage to the business, benefitting an interested consumer. All suitable retail items could be on the app, potentially available 24/7 and this would be a conduit bringing the entire inventory to the shopper’s eyes and fingertips with ease. The downside for shoppers, apart from waiting, could be they spend more browsing time than they would intend, wasting money impulsively if ordering things that they don't necessarily need (the apps will manipulate buyers in this direction with inbuilt discounts). Shops may have to slash inventories and diminish choice, like Apple did post 1997, to make it easier for shoppers to browse the more popular items and increase their own margins for potentially higher value goods (with customisable features such as choice of colour). Amazon and eBay are bad enough!

The high street is increasingly being overtaken by services that do need an old-fashioned shopping experience like freshly baked or brewed foods and drinks including coffee, cakes and pastries. The UK chain Gregg’s the bakers have recorded profits of £1 billion off the backs of headline issuing items like their vegan sausage roll. Department stores like M&S or Waitrose may dominate in food for high-street retail rather than clothing that could be purchased online. The thrift stores also take over, given all the unwanted items purchased that may no longer be returnable, in part through apps (the UK is a leader in high turnover clothing dubbed fast fashion).

Competition will be stiff for app space on your smart phone. You as a consumer will not want to have ten or more shops featured on your phone, though this will become increasingly common. The killing fields of the high street will see its share of winners and losers and ironically, those boutique stores like bookshops, parked next to a coffee shop could do better than before, given their bigger high street rivals have been forced into retreat. Online retailers like ASOS now often rival high street brands not to mention Amazon and Ebay, among the wealthiest tech companies. In the end, smart phone producers like Apple will still maintain a demand for their products, given a screen could be the only way you can shop and even pay conveniently and in style.

Get ready to join more queues in shops as you collect pre-ordered goods. More plastic wrapping and hangers to dispose of; more shoes on your shelves and more dumping of unwanted stuff at second hand shops. Also, more reviews you are requested to write, with some retailers like Argos offering you the chance to win a small lottery for every review of yours that gets published. It’s a shopping revolution. 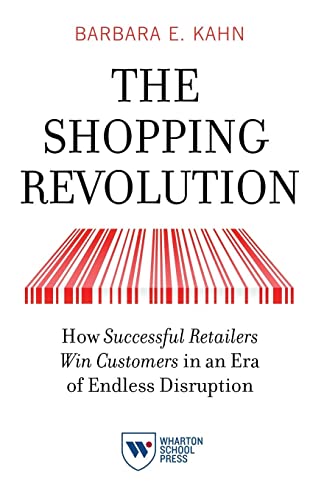 The Shopping Revolution: How Successful Retailers Win Customers in an Era of Endless Disruption
Buy Now