Getting Rid Of Cable to Save Money

Time To Cut The Cord

Each time when my cable company was taken over the price kept getting higher. The third time the price was going to go up $60 dollars a month. That would work out to $720 per year. That was when I decided it was time to cut the cord.

I needed to get rid of my cable, but I still wanted to be able to see all the latest TV shows. So I started to look around for cable TV alternatives. I wanted to find what would be the least expensive and still let me watch current TV programming.

So I started doing some research and I found the best cable alternative that got me everything that I wanted and more for a one time fee. The only monthly charges necessary would be for internet fees and I already had unlimited internet access, so I had no difference in cost per month.

One of the best things to do is start asking around for what other people are doing and checking out the offers available. One alternative would be to use a satellite dish instead. However I get offers for this all the time and while it would be slightly cheaper than my new cable provider it is not that much cheaper.

My Uncle was telling me about how he recently got rid of his cable and installed a TV antenna. It was pretty cheap to buy one and then you just get the channels that are free over the airwaves. The problem I found with his solution is that there were not many channels available and that led to very few choices for what to watch.

My cousin was a big advocate for Netflix. He was always talking about how many TV shows and movies were available for a low monthly fee. What I didn't like was I couldn't get all of the current TV shows.

Which Do You Think Is The Best Cable TV Alternative

I finally found the perfect alternative to cable TV, a streaming media player. One of the ladies at work had bought one off of someone for $300 and she was raving about how amazing it was.

For that one time fee of $300 she could get old TV shows and she could also get new TV shows. What really impressed her was that she could also get all the latest movies including ones that were still in the movie theaters. All that and she would never have to pay a monthly fee ever again.

So I started looking online and found out she had gotten ripped off. Someone had gone out and bought the boxes cheaper and was then reselling them for a profit. That same box she paid $300 for was available on Amazon for almost half of that.

The problem was when I asked her how it worked she had no idea. So I started asking around to see if someone who had it knew how it worked. That was when one of the guys showed me that you could get the same thing on your cellphone or on your computer.

He had it right on his cellphone so he could show me how it worked. I got the name of the software which was called KODI. Then I went home and loaded it onto my computer so I could try it out.

I found it was very easy to install and with it I could get all of the latest TV shows and movies just like they told me. So I started looking at getting a streaming player so I could get rid of my cable for good.

Setting Up A Streaming Media Player

As long as you are decently tech savvy you can install it for yourself as well. The video below is the one I used to set up my streaming media player. You watch it and then judge whether you think you could do it yourself as well.

Streaming Media Player You Set Up Yourself 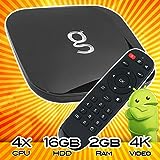 You can get this box for $99, but you have to set it up yourself. It comes with 2GB RAM and 16GB of internal storage.

If you are looking at other boxes with a lower price pay attention to the RAM that it has in it. Some of the cheaper boxes only have 1GB RAM and this will cause you a lot of frustration due the shows always being stopped and buffering.

If you want what you are watching to keep running once it starts make sure you buy a device with at least 2GB RAM.

How to Load Kodi on Your Streaming Player

What You Need For A Streaming Media Player To Work

For a streaming media player to work you will need internet access. You can connect the box with an Ethernet cable or use a WiFi box.

Most people will use the WiFi box as they may already have one for their lap top computers. This also allows you to have your streaming media player attached to your TV without having to have your computer close by.

You will want to make sure that your internet speed is fast enough or the buffering (waiting time) will drive you crazy. It is recommended that you have 3.0Mbps for High Definition content and 1.5Mbps for Standard Definition.

What Do You Think Is The Best Cable Alternative To Save Money?