How not to lose your money in Spanish property purchases.

After reading Spanish Real Estate: A Guide To Buying Property In Spain by ryankett I thought to write this hub.

Ryan has done a fine job of explaining the technical side of buying a property in Spain, hence the link to his hub, for I can add nothing to it.

But I can add some unconventional advice to folk who may think of buying here in Spain, for I have lived here for a few years (in March 2010 it will be 25 years) and been involved in and around the Spanish property business since 1979.

I started selling property in Spain during the 'black bag' years, before Maggie Thatcher lifted the exchange control restrictions, which had meant that nobody could take more than £50 out of the UK without permission.

People did of course, hence the term 'black bag', and we helped them spend their mostly covert and undeclared funds by converting it into Spanish property.

I had a friend who worked with the guys who ran this operation, and he said 'Come on in the waters fine' so I did, sitting in a small Knightsbridge, SW1 London office answering calls from people who called to request a copy of our 'Spanish Home' magazine.

We advertised 'Thinking of buying a home in Spain, you need Spanish Home* magazine for all the latest facts' and when they called, we put them onto a 'free' or subsidised inspection flight.

* There is a magazine in publication today called Spanish Homes Magazine, which has no connection to this article and as far as I know is a perfectly normal magazine, not to be confused with the one mentioned above.

Free if they sounded gullible and subsidised if they said they wanted to go it alone, "OK I would say, we will provide you with our cheaper flights, which we get because we buy in bulk" and sell them a flight that we paid for and resold them cheaper, just to get them on OUR plane with OUR sales people and to know where they were staying (often in our 'subsidised' accommodation).

Sales companies lie to get your money.

Hopefully that is not a surprise, but experience tells me it will be for some nice folk, who seem to leave their brains at Passport control.

Once here we would herd them like sheep, with me as the sheep dog, meeting them for breakfast, driving them to the properties and selling them what WE wanted them to buy.

If they were interested in the night-life, yours truly would take them around, showing them the best places to go, places that would leave them wanting more of the 'dolce vita', yet never leaving them alone, for our competitors would pounce like carrion to a carcass if they had the opportunity.

They were simply a part of the food chain, to be consumed and evacuated on the next flight home once their weekend was finished and the contracts had been signed.

Since we invented the 'inspection flight' 30 years ago, it has been perfected by many subsequent waves of opportunistic property sales folk, to such a degree that our simple control efforts are laughable by today's standards, and our skulduggery seems innocent compared to how people are manipulated now.

So, some advice on how to NOT lose money in Spanish property purchases.

Know your market, and get to know it well.

Nobody who comes here on an inspection flight can possibly know whether what they will be shown represents good value for money, they are constrained and even if they visit other independent real estate offices, they will still be manipulated.

Property sales people want to earn good money, (because they spend a lot) and that happens not only when they sell a large volume of properties (which only happens in the 'good' times), but also when they sell the right property, i.e. the one that includes a good sized commission for them; either because the owner is desperate to sell, and will agree to their extortionate rates (5-10% commission can be got) or, will also possibly agree that they (the salesman) will be able to keep anything over a certain price, so (say) they are desperate to get their cash out, and the property salesman hears that they will accept (say) 50% of the retail value, he may sell it for (say) 80% of the retail value and make a good sum on that one sale.

So advice number one is....

Rent before you buy...

Because whatever you spend on rent will be saved on purchase, if and when you eventually do buy a property.

You will need to find the right area to live in, and you must view your purchase as somewhere you may live, for many people do end up living in the 'holiday home' they bought on a whim.

To do this you need to spend free time in the area you thought you liked, before you bought the property from that nice salesman.

As a 'tourist' purchaser, you may have a vision that includes a pool as an essential for your new home in the sun, which is fine, pools are great, communal or otherwise, but also expensive to run and frankly, when you live in the sun, what you thought you would do is not actually what you will do.

My sister, who visits spasmodically when she can, will lie in the sun at every opportunity, and thinks that what we consider cold is just perfect for her, coming from the frozen north and hardly ever seeing sunshine.

Today, (in late January) it's been 18º Celsius where I live, which is sweatshirt weather for me, but has 'guiris' (an 'affectionate' term for foreigners) walking about in shorts and sandals.

If you stay here long enough, you will adjust, and find that the pool which costs a fortune to run in time and or maintenance costs is hardly ever used, and far too large anyway.

I live next to the beach and have a small plunge pool, very nice for July and August and unused the rest of the year. I can (could) use the sea 365 days of the year if I were a Scandinavian, but in reality it's only warm enough to even paddle in the Mediterranean for two months a year.

My dog uses the beach to run upon during the winter, during the summer it's illegal to take a dog on the beach, because it's full of tourists.

These things are not mentioned when the real estate salesman is touring you around properties, you have preconceptions of this wonderful life you will live when you have your dream home in Spain, he will feed your fantasy as much as is needed to earn his cash.

So rent a house (which is much cheaper right now anyway) and live here for at least a few months BEFORE you step into a real estate office with a credit card in your pocket.

But I cannot afford the time....

OK, buy now and repent at your leisure.

You may be fortunate, buy the perfect property in the ideal location, but all those folks who populate UK TV programs complaining about Spain seem to invalidate that concept slightly.

Unless you are very rich and/or have owned (say) at least 10 properties in your life, you are an amateur waiting to be ripped off, and there are plenty of very skilled people to do that in Spain.

The money you will spend on rental you will save on the purchase price, wherever you buy, besides which, if you liked the rental, most vendors will offer to sell you the place like a robbers dog.

You would save that because you would have lost that sweet smell of 'punter' and started to assimilate into the local customs and way of life.

You would probably buy your property without any agent involved.

Looking in the local papers will give access directly to the owners, and is best done from the comfort of someone else's pool.

So before you leave your brains at the airport, take a deep breath and get real about Spain.

It's a fabulous place to live, with good food and friendly natives, especially if you make an effort to speak to them in Spanish and join in, plus the climate makes any problems worth while.

That's why you need to look to buy as if you will live in the property full time, because every year more people do just that, give up on old 'Blighty' (or wherever they come from) and move down here to sunny Spain.

But please, take the time to get it right, we all suffer when fools rush in where locals fear to tread, and although coming to Spain and losing your money is almost a tradition, it's one that we would quite like to stop happening. 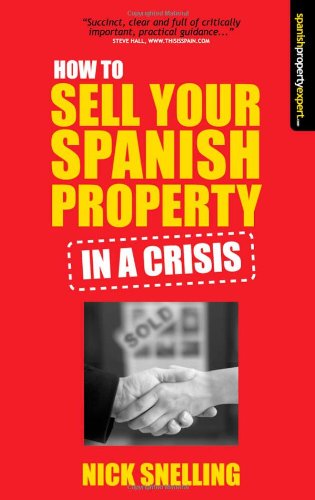 How to Sell Your Spanish Property in a Crisis
Buy Now