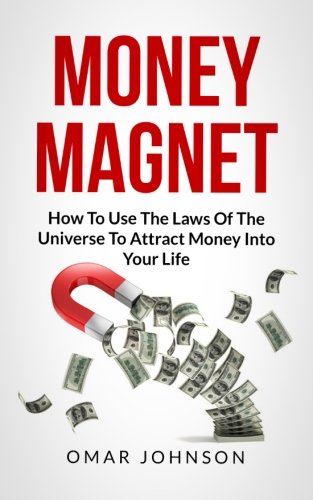 Money Magnet:How To Use The Laws Of The Universe To Attract Money Into Your Life
Buy Now

The Philosophy Behind a Money Magnet

A money magnet stands by the idea that money can be drawn to you. Therefore it is not just a technique in how to save money, its a philosophy.

So to really work a money magnet, I had to change the way I thought about money.

A couple of key points about the theory of a money magnet:

But I Only Make So Much Money!

So the "money is not limited" idea can be a tough thought habit to break - but it can be done.

I'll show you how in my mind, I adapted to the idea that money is fluid.

Money is Not Limited

For most of my life, I believed there was a limited source of money.

Why doesn't it always happen that way? What if I get a $50 bonus for opening up that credit card account? Then there's that coupon for $10 off for every $100 spent to shop at a different grocery store. Now I'm ahead, but only $10 for this weeks offer. The $50 won't credit to my account for another 3 weeks.

So my money is different this week, and will be different again in three weeks. Then 2 weeks from now I get a flat tire. Money in - money out. Money is moving around and fluid.

Even though my income technically was the same every week, I could change my thinking and see money differently when I thought of it as fluid.

I work overtime and expend more energy I get more money.

Poverty Consciousness or "I can't afford it!"

Poverty consciousness is a state of mind.

It's easier to say, "I can't afford it." But more empowering to say, "I don't want to spend my energy that way."

I really want that tattoo but I can't afford it. Well if I don't pay my electric bill this month I could get the tattoo. It's a choice.

Or, I could get that pretty bracelet, but then I wouldn't be able to buy dog food . . . OK, priority, choices. We make choices in life, every day. Besides I LOVE my dog!

I can flip my hair back and say, "Ahem, I choose not to spend my money that way." It's much more freeing, more empowering, and goes along way towards setting the intent. My dog feels better too.

The RULES of creating and using a money magnet

Rules for creating a money magnet:

Rules for using a money magnet:

Just as money is fluid, a money magnet has an ebb and flow as well. There are times to create a money magnet and times to use one. You don't want to get too far out of balance on this.

Pull Money to You

Is it Really a Magnet?

The more you create, the stronger the magnet becomes. The easier it is to create your money magnet.

How I began to build my money magnet

To be honest, starting a money magnet for me was easy. Easy because I put so little away at a time.

I was working as a bartender, so I came home with cash every night. If I came home with $100, I stuck $10 in an envelope and put it in my dresser drawer. Because it was late when I got home and my money was in cash, I wasn't tempted to spend it and I couldn't pay a bill with just $10.

I was able to pay myself first and I was actually surprised at how quickly this built up.

Remember the rule, use the money magnet on something that has the probability to draw more money to itself. Like a house! - that could draw more money by building equity.

I'm not bartending anymore, so now when I get paid I physically go to the bank. Before paying any bills, I withdraw 10% in cash.

By getting into the habit of paying myself first and setting aside just 10%, I changed my mind set. And with that, my whole life changed.