I Gave Up My Car for a Bicycle – Willingly!

If the mass transit is good, a lot of people don't own cars

With one exception, I've had a car my whole adult life

Can you live without your car? I ask that question mainly of people who don’t live in the suburbs. I know that the suburbs have been designed for the use of cars to the point that many neighborhoods in suburbia don’t even have sidewalks. If you live in the suburbs and manage not to use a car for almost every destination away from your house, I congratulate you.

I recently gave up my car. It was a big move, but so far I’m comfortable with it. However, I’m semi-retired, working at home and I live within 7 blocks of two major bus lines. I’ve also lived here for several years and have great neighbors in case of an emergency.

When I lived in New York City many years ago, I didn’t have a car for over four years, and didn’t miss having one at all. I had bus, subway or cheap taxi service wherever I went in any borough. I walked much more than I have since that time and thought nothing about it. And if I wanted to go out of town, I took a train or plane, or I rented a car. It was a very satisfactory arrangement, and I have remembered it fondly many times in the years since.

My next move was to San Antonio, Texas. What a change! The city was surrounded by a huge loop of freeway, and everyone had a car, even if it belched black smoke at it stuttered down the road. There were always derelict cars on the sides of the loop, as if people who needed cars but were to poor to repair them had just left them there. I know that San Antonio had a bus system, but it was not a good one at that time. I wouldn't have been able to use it for the business I had then, anyway. My business partner and I traveled around town several times every week with supplies and equipment.

Using a bus can help get that bicycle to the countryside

Finally, a chance to ditch the car

When I moved to Oregon, I chose the state capital, Salem, to live. Salem has a pretty mediocre bus system. It has limited routes and doesn’t even run on weekends or holidays. That shows how many people really use it here. Of course, that wasn’t the only consideration for moving here. On the flip side of that, a good portion of Salem is also pretty flat, so walking or bicycling isn’t difficult. And the buses all have bike racks, so I can ride a bus to the end of the line and take my bike from there into the country. I chose Salem because it’s handy to so many places and it sits smack in the middle of the Willamette Valley, a very fertile, beautiful place to live.

Mysteriously, this more-than-slightly-conservative state capital sits between two very progressive cities, Portland and Eugene. (Or maybe it just feels more-then-slightly-conservative sitting between these two cities.) I’m not sure about Eugene’s situation, but I know that Portland has a good bus and metro system and is also known as a place where bicycles are ridden more than any other city in America. But I’m in Salem, not Portland or Eugene.

When I arrived here I hadn’t given up on my vague desire to live without a car. I bought my house about 15 years ago with an idea in the back of my mind that I would be reducing my use of a car at some point. I live about 10-15 minutes from downtown by bus and about 5 minutes by car.

However, I didn’t work downtown for long. I worked in Portland. Then I went to school in Portland. When I found a job 10 blocks away from my home, I thought it was finally time to walk to work. But I was wrong. I worked 12 and 14 hour days, coming home long after dark. I also used my car to pick up supplies and go to meetings.

Bikes have been around for a long time.

When I became semi-retired a couple of years ago, and began writing from home, my commuting complications ended. With income naturally reduced by the chosen profession of writing coupled with retirement income, I didn’t want the expense of having a car to remain the same as it had when I had a fulltime paycheck.

That’s when I began to realize that the time to go carless had arrived. I didn’t use my car enough to justify paying for it. I used it two or three times a week to get groceries or to go somewhere. When I looked at the places I went, most of them were achievable by bus, bicycle or on foot, and I had the time to do use those options. I also had the freedom to schedule errands a day or two later if the weather was really bad.

Another factor that stimulated me to make a change was the fact that, sitting in my house writing all day I was gaining weight and developing quite a case of keister spread. So I began to wean myself from driving. I left my car in the driveway more and more. I bought a wheeled cart to carry groceries in, and took the bus to the grocery store. I started taking the bus or walking downtown, depending on whether or not it seriously rained.

When the time came to renew my car’s registration, I couldn’t justify the renewal cost, let alone insurance, filling the gas tank, etc. When I also considered that something expensive could malfunction on the car, because it was a 1997 Honda Civic with high mileage (I keep cars for a long, long time), I decided not to renew the registration. Instead, I gave myself another four months without using the car at all to be sure I was on the course I wanted to be on. Then I sold it.

It's like knowing how to ride a bike. Oh, yeah?

With part of the money from the sale, I bought a new bicycle. Now I’ve added riding my bike to my transportation options. I haven’t ridden a bike for a long time, and am not what you’d call ballerina material. So, between this being a new bike for me and my muscles being stiffer than they were when I rode a bike as a (much) younger woman, I’ve given a few people some giggles by falling over sideways when I stop. (I know, it’s supposed to be done by putting one foot down on the pavement, but that foot dances sideways independently of me and soon I’m doing the splits with a bike between my legs. Not pretty.)

I’ve started doing stretches on a better schedule to improve my ability to do the splits and other possible acrobatics needed for riding a bike at my skill level. I’m looking forward to rides in the country, and can see them happening in the near future. There’s a bicycle club here, and I’m also interested in joining them.

I know you’re wondering about those times I just can’t do without a car. But I have wonderful friends and neighbors. If I truly needed something that I couldn’t get using my present transportation options (with more time allowed for the errand, so far that hasn’t been the case), I know that one of them would give me a lift or loan transportation to get it. As it is, they sometimes think of me when they go to the store or run other errands. If I go out of town, I share the trip with friends via their car and my paying for the gas. If I want to go out of town by myself, I’ll rent a car. It’s all working out. 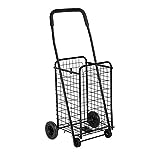 Honey-Can-Do Black Four Wheel Utility Cart, Medium
This is your basic shopping pull cart similar to the ones we used in NYC.
Buy Now

I have gotten some odd responses from people when I’m on foot with my cart. When I took a cart to do groceries in NYC, everyone did that, and we all used those basic wire wheeled utility carts. It was normal to see women in designer clothes and bright white tennis shoes in the grocery, butcher’s or produce market with a folded wire shopping cart. I’m sure that they’re doing the same thing now, but the designers are also doing shopping carts these days.

However, here my pulling a cart is an unusual practice. People tend to think that if you’re waiting for a bus with a pull shopping cart, it’s a poverty situation. While I admit that money isn’t dripping off my backyard trees, I’m not poverty stricken. But I won’t stop anyone to tell them that. Instead, I’ll be the odd woman with the rolling polka-dot luggage-looking shopping cart (yes, now I have a designer shopping cart myself). Until, that is, more people start thinking like I do in Salem, Oregon. I’ve named my cart Bernie, and I’m going to get a bumper sticker for it that says “Go Green”.

Someday, after the technology improves, I’ll probably buy an electric car and charge it via solar panels on my garage roof. I had decided about 3 years ago that I wouldn’t buy a new car until I could buy a totally electric car. When I can drive long distances without recharging, I’ll reconsider having a car again. I’ll still use the bus, my bicycle and walking for most local trips. As long as I’ve tended to keep gas-powered cars with all of their moving parts, I’ll probably only buy one electric car and have it for the rest of my life.