How HubPages Helped Me Leave My Job

At the beginning of 2011, I was stuck in a dead-end job. The hours were opposite the school schedule, meaning I was always gone when I would have been better off at home. Not only that, I was doing something physically stupid for me. I had to lift heavy item with a chronically bad back. I knew I needed to get out before I became an invalid - but how?

Like most middle aged moms, the job market was looking a little flat. But there were the same old familiar issues - paying bills, paying rent, and children who needed new clothes, shoes, and sports equipment / fun things just like their friends did. What's a mother to do?

Seems there is nothing worse than the hopeless feeling that there is No Way Out.

Happy but not satisfied

Moonlighting, or Plan B

Ways I could make money included -

Last but not least, WRITING ONLINE on HubPages and other Sites!

This Hub is the continuation of an earlier Hub written last Spring called "Do I Stay or Do I Go?"

After deciding that financial independence was the only way, there were obvious steps that needed taking.

1. Analyze Expenses - Get out of debt. Time to get a pencil and paper out and see how much in debt I really am. There is the one big credit card, some unwritten bills that are to be paid off "when I get a chance", and so on. I got it all down on paper without fear or pressure - the truth will set you free.

I had a look to determine which were the nastiest bills of the bunch, the highest fees, interest, and so on. I did a semi-snowball approach. Some of the baby bills got wiped out in the beginning, others got saved til later because nobody was worrying about them and I was feeling more pressure about the credit card lenders. I determined to take a step forward every day and keep going, no matter what. Wasn't nearly as bad as I expected it to be!

2. Analyze how much I really earn - and where does the money go? Some things are just too obvious. There are the basic monthly bills which don't change too much. There were some questionable items - but in fact, I wasn't blowing it that much. Perhaps 200 in discretionary income could have been eliminated. I needed to gear up, mow down the bills and start a cushion fund to tide me over.

In order to really SEE with open eyes (no more sleepwalking) an Excel spreadsheet works wonders. The columns go as wide as you like and the rows are from 1 to 31, so each day's expense gets plugged into the appropriate column. I use a percentage of total to see what percentage I paid on groceries, transport, etc. It's actually FUN!!!

3. Identify Alternative Sources of Income. I wrote down what I could actually make money at.

At New Year 2011 I spruced up my resume and started sending it out for online jobs, especially for writing and editing. At first it seemed I would never ever get a job. There were plenty of other writers, plenty of other editors. I signed up for every job board I could find, because I am bilingual, and that was a big plus. Not that many people are looking for Croatian translators, but there are a few - and I decided I might as well market whatever skills I have! It took a few months to get the ball rolling, but when it started, it really went. Hardly a day went by that I didn't have a side job to do.

Pay Pal is great - they do take a little piece, but this was how I could supplement my income. In only ten months I was completely DEBT FREE!

These are some of my favorites:

I had already been employed five years. The pay was stable, even let's say, a tidbit better than average. But other things were obnoxious. I wasn't allowed to carry my cell phone on the job - what if someone needed me? The kids' father was usually not available, so who would attend to their needs? This was a real concern. Second, The store was way out in the boondocks - I was far away from my family. One autumnal afternoon my daughter walked in the dark to come find me! That was very upsetting. She did just fine, but it was very unsettling.

Our work schedule was a complete mystery from one day to the next. Rewards, like getting days off were bon bons that the boss would deal out in exhange for spying. The reality was that no one knew what the schedule was for even the next day or when they would be given vacation time. This type of scenario is particularly nerve wracking when trying to combine family activities like PTA meetings, birthday parties and other obligations with a "put up and shut up" work culture.I knew I would be leaving my job at the store (where I felt a prisoner)

As my side income increased and my debt and expenses were minimizing, I felt a change. I knew that I was going to get out of this mess! I dind't know how eactly,

only that It sucked eight hours of time from my day, time that I could be using more wisely. I had already seen that I could make double the income and knew that I would be better off home when my kids got in.

As the side jobs enabled me to leverage up my spending and debt resolution, something wonderful happened! I started to gain personal power. As distasteful as the job was, I felt that I was gaining leverage. People asked what was new. If they only knew! I was on a quest, and just this small level activity made my daily routine less gruesome because it was a Temporary n Situation, not being doomed Permanently to Hell!

I saw the same look of resolute resignation in the other worker's faces. Their expressions like "What can you do" "Another day another dollar" "Nothing better out there" and so on showed me how trapped they felt, too. What a life!

At the same time, I began to speak up for my rights without demanding. Words emerged, like, "I can't lift that" or "We can do it together, but I can't alone, it is too hard for me". Changes began. I began exercising, going to the physical therapist for treatments and cherishing myself. If I was on my break, no one could harass me to come back early - 15 minutes a day was Mine. I was no longer willing to allowing myself to be beaten to the ground as a tired old woman on the verge of collapse. A big but subtle change was emerging. No longer did I feel stuck at the store. I was making my way out! Step by step, inch by inch! Not unlike someone digging a tunnel under the Berlin wall, I knew I was getting closer everyday to seeing broad daylight! I was getting closer everyday and I felt it! In my heart and soul, I had already won!

Odesk - the mother of online jobs

If you are Bilingual...

I signed up at Odesk, Freelancer, Elance, and more. Being on gmail, which is an intuitive email system, I would get new links on the side for new job boards. I would nicely send off my CV (curriculum vitae) with photograph, job experience and bla bla bla.

In April I got my first job! Editing a Russian website written in English. In all fairness, they did an OK job, but there were corrections to be made. I did the job and GULP - earned 1/4 of my monthly pay! It was a large job, but took me 3 days - again, I was making the same amount of money at the store in half the time! Woo Hoo!

In the Summer, after SIX MONTHS OF APPLYING FOR ODESK JOBS, I finally got two or three jobs all at once. At this point, I have more jobs that I can handle. It really works, just keep going.

In September I went on my much deserved vacation, having already paid off all of my debts - it was the most wonderfully satisfying feeling that anyone can describe. No money owed whatsoever! What more could any consumer want?

At the end of September I lost my job - YAHOO! Because I was let go as an "excess employee" (due to my chronic back, I believe) I was granted unemployment, which I am nicely saving in the bank. My online income continues to grow and now I am looking to increase my passive income to free up more of my time with family, friends and loved ones....

Another big point. Staying at home saves you money. I work from a room in my house, and I don't buy coffee or snacks outside. I have some nice clothes, but I generally hang out in my jeans and homemade sweaters which suits me just fine. 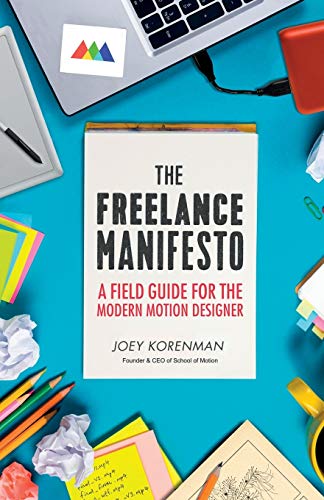 The Freelance Manifesto: A Field Guide for the Modern Motion Designer
Buy Now

New Years - a Time of Resolutions

If you want to change your life, just find a way to do it, and do it.

Find a way to be happy and follow your heart. I hope my story helped you. This is only the beginning. And my husband? He is happier than ever that I am home to help the kids with their homework so he can concentrate on his career, I can juggle my five hours of work around their school schedules. They also respect and appreciate me more and more because I told them what I was intending to do and were happy when I did the deed - make the break and never look back!