A Few More Thoughts, or Thoughts About a Few Thoughts!

A few months ago, I wrote and published a hub (find it here,) and my old friend and sparring partner Rad Man posted this in the comments:

"Well done Chris, you have touch a lot of things that I often question myself. I hope you don't mind me giving my two cents. Wait Canadians don't have cents anymore.

I've asked an American friend to try to explain the American Health care and American Christianity to me, but he was not much help so, I'll try a little here.

Why do American Christians not want social healthcare? It seems to me that Jesus preached helping EVERYONE, not just those who could afford it.

Why do American Christians vote republican, when it's the democrats that would have more christian values (besides abortion, actually I don't think abortion was mention in the bible. I do think the church wants more christians)?

Publicly funded healthcare in Canada takes care of everyone equally. You can buy extra healthcare for dental or prescription if needed or if your lucky your employer can supply it. It just seems like the Christian way to me, and because everything is regulated by the government big farma, doctors and hospitals can't over charge. Ever wonder why retired American's go to Canada to get their prescriptions filled?

On another note, there is no link between immunization and autism, but there is a big link to antibiotics and some forms of autism."

First of all, let me thank you for the compliment.

Second of all, let me caution you against thinking that American Christianity is some monolithic political voting block. Many people who I talk with who are not believers constantly cite the fact that there are so many Christian "cults" or sub-groups that disagree on the interpretation of the Bible. This is just as true in politics as it is in religion. There is a large though not quite as vocal "Christian Left" in the United States, mostly comprised of "mainline" Protestant denominations like the Presbyterians, Episcopalians and Methodists. To illustrate, while the Baptists line the street around the abortion clinic and picket, the Episcopalians have people walking next to the women who enter the clinic's front door. And politically it is largely the same thing.

Jesus did preach about helping everyone. "Jesus said to him, "If you wish to be complete, go and sell your possessions and give to the poor, and you will have treasure in heaven; and come, follow Me."" (Matthew 19:21 NASB) But Jesus preached that we as individuals needed to give without expecting repayment. He never told the Roman government that they needed to feed the poor, and more importantly, He never told the Jewish government (the Sandhedrin) that they needed to feed the poor. The verse comes toward the end of the story where a rich young man asks Him what "good thing he must do to enter eternal life." It's about an individual's relationship with God. A government that helps people because Jesus said to is indeed practicing theocracy, and also robbing individuals of the opportunity to work on their own personal relationships with God and their fellow man.

If you think that's a justification for institutionalized selfishness, you're not completely wrong. Most (as in, almost all) people are selfish by nature, and most people if given an out that will allow them to continue to be selfish will do so. That, however, is not a reason to apply Jesus' teachings meant to apply to individuals to larger, more corporate entities. (No, I don't mean corporations. Corporate entities in this case just means large groups of people.) Let me put it this way: You can't legislate morality. You can legislate what a society is forced to conform to as moral, but no law (not even the Mosaic Laws) have ever made people into moral beings if they are not inclined to be. And no government is capable of morality in and of itself, only what the people in it are capable of.

Whether a government should practice charity is a different question. But just like morality, no government is capable of practicing that virtue in and of itself. Governments do not produce goods, they tax the production of individuals and corporations. So governments also do not practice charity, they force individuals and corporations to practice charity vicariously through taxes. And in today's American society, for the government to do so quoting the command of Jesus as the motivation is to invite years of court cases and enough writing about it to wipe out every forest left on the American Continent.

Remember, you asked me a question. I'm explaining the thought process. As a recipient of government "charity" vicariously through Medicare, my own personal view is a little more subtle than that. And someone who is a religious liberal thinks a bit differently about such things than I do.

There's also the point about "Christians not wanting healthcare." The fact is that, with the exception of the "Religious Contraception" controversy, this isn't really so much a religious issue. For the most part, the argument tends to be framed in terms of personal liberty vs. personal responsibility. Don't forget that twenty-six individual states (including Indiana, the state I live in,) have sued the Federal Government to overturn this law en toto. That's not a religious argument. No state, not even Utah, is a religious entity. That's about the fact that the law will expand the already-stretched-to-the-limit Medicaid budgets (Medicaid is the public assistance budget for healthcare administered by individual states.)

The "Religious Contraception" controversy throws together evangelical, conservative Christian groups and the catholic church. These two groups are not natural allies, but both see an encroachment of their beliefs by the Federal Govenment when the Feds want to force religious institutions to provide contraception for free (I don't know if that includes ru486 but even if not, it's saying that if you hold a particular religious belief, then tough. The government decides what God meant and what God will allow.)

Which also serves to answer your question about, "Why do American Christians vote republican, when it's the democrats that would have more christian values..." It's about whether you think your relationship with God and man is between you personally and them or you corporately and them. Democrats tend, as a group, to believe that Big Government is the answer to most (if not all) social problems. And government cannot have your relationship with God for you! But again, don't think that all American Christians vote Republican. Plenty vote Democrat. And Barack Obama got a lot of conservatives to vote for him in 2008.

"Publicly funded healthcare in Canada takes care of everyone equally. You can buy extra healthcare for dental or prescription if needed or if your lucky your employer can supply it. It just seems like the Christian way to me, and because everything is regulated by the government big farma, doctors and hospitals can't over charge. Ever wonder why retired American's go to Canada to get their prescriptions filled?"

No! I never doubted that Americans go to Canada because the drugs are cheaper, and I don't blame us! I didn't know that you could buy extra insurance in Canada. What most Americans have been told about Canadian single-payer (publicly funded) healthcare is that it's rationed. Now, we are told that most people can into a doctor easily enough, although the wait is longer in your country than ours. How true this is, I don't know ,but it's what we've heard over and over again. The real downside to your system comes with elective surgery, even if it's important elective surgery. That it can take months or even years to get simple procedures that are considered elective.

You're right about one thing, Christians should be more charitable. The difference of opinion is whether it's the government's job to do it for people.

Since I've been taking care of my wife, I have not been as informed about a lot of things. I do know that no definitive link between vaccines and autism has ever been established. And that British doctor didn't help things with the way he conducted his research. But there has also not been definitive proof that vaccines do not cause regressive autism. And I didn't know about the thing with antibiotics.

Bet you didn't think just a few questions would get me to running on so long! 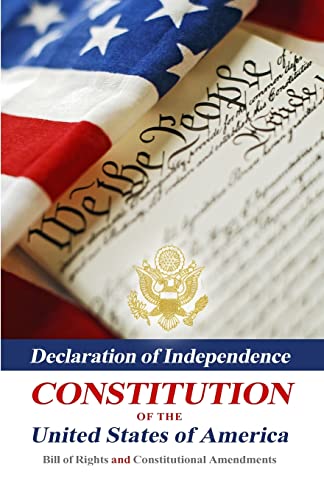 Declaration Of Independence, Constitution Of The United States Of America, Bill Of Rights And Constitutional Amendments
Buy Now