A World Without Oil: The Future

Living in the Past

Twelve months after all the underground oil disappeared, and famine spreads across the world, in parts of Africa where famines are sadly a regular occurrence, the death toll numbers something in the range of 20 million. Back in the US, the closed, deserted shipping ports mean that the country is becoming increasingly isolated. The age of international trade is now over; brand new cars fresh off the production line will never be driven.

The loss of oil also causes the shutdown of armed forces across the world, the US armed forces was once the single largest consumer of oil in the country. But now the tanks and planes sit empty, the task of keeping them operational was just far too expensive. Emergency vehicles continue to enjoy priority, using simple conversion systems in order to run on ethanol. For now, life saving services continue to run in the US and Europe. But, to the government it becomes clear that even now more tough decisions need to be made. The problem is that plants grow very slowly and already demand is outstripping supply. Remarkably, the US has managed to turn 40 per cent of its corn crop into ethanol, but the simple truth is that more corn in the fuel tank means less on the dinner plate. The people continue to grow hungry.

Ethanol is not having the effect that many anticipated, and the roads remain largely empty, which is an absolute blessing for animals across the western world. As a result of the loss of oil, the populations of frogs, hedgehogs, foxes, deer and moose explode. However, farm animals are not so lucky; the farms no longer get deliveries of vital feed. The yards are abandoned and hundreds of millions of livestock die.

Slowly and surely, the hands of time begin to move backwards. As factory farms collapse, many ordinary citizens return to a simpler way of life. This return wasn’t accomplished through choice but rather necessity. People simply had to find ways of growing and rearing their own food. Global food production disappears, becoming localised. Many of the cities that are still inhabited become home to thousands of new farmers. In the suburbs, families plant and grow whatever they can. The loss of modern medicine brings on a wave of pandemics, including influenza that claim the lives of hundreds and thousands across the US alone. Quarantine zones are established to try and contain the breakout, but prove largely ineffective. The already stressed hospitals are still in high demand, but for many without modern transport they are now impossible to reach.

However, some people have obviously thought ahead and kept gas/petrol in reserve for just such an eventuality. But hoarding petrol does not work, as the chemicals that once kept it fresh have since degraded it. In just one year, the petrol has gone stale, and is useless. Within just one year of the loss of oil, our interconnected, joined world is falling apart.

In a World Without Oil; Sights Like This Will Become the Norm

A Ship Today, a House Tomorrow

A decade after the disappearance of oil and the world is still reeling from the shock of it all. Economies collapse, governments disband, people continue to starve and the prices of electrical goods such as batteries soar to astronomical prices. Mass migration causes civil unrest in countries such as Mexico, Spain, Portugal and Greece. Even beyond the Earth, things in space are not quite the same as they were. The oil that once powered rockets into space is far too precious to waste and thus the 200 satellites orbiting the Earth that made our world of international communication possible become space junk.

Back on Earth, some rubbish is proving to be of high value, especially discarded electrical goods such as mobile phones. Each tonne of used mobile phones contains more than 10 ounces of gold, 300Ibs of copper and 6Ibs of silver, all vital materials in a world where trade has come to a shuddering halt.

It’s not just electronics that are highly prized; plastics takes thousands of years to decompose and old bottles and containers once carelessly discarded are recovered and reused. Some resourceful people even turn their attentions to the old cargo ships, stripping them of anything that can be reused, in particular their steel hulls, which are converted into a very cheap and useful raw material for building.

Not all ships are torn apart; some still ride the waves, running on biodiesel. Many are bringing a precious element to North America, lithium. The lithium comes from Bolivia, mined from the salt flats by the tonne and is the main ingredient for the most efficient batteries in the world. The demand for electrical alternatives across the world grows.

In Bolivia, the lithium makes the country rich and prosperous; they are one of the few countries benefitting from the oil collapse. They quickly become the Saudi Arabia of this new post oil world, an economic superpower. However, the production of lithium isn’t quite enough to revive world trade. The hope for that lies in algae that can be processed into oil and produce 30 times more energy per acre than other bio fuels. It’s completely renewable and doesn’t need a lot of fertiliser. A decade after the disappearance of crude oil, a new kind of oil is in use, more than 10 billion gallons made from algae.

But this is still not quite enough to restore the modern world completely. The planes still sit, stranded on the ground; it’s still far too expensive to revive commercial flights for cargo and passengers. But other transports nobly step into fill the void. The trucks, some 2 million of them powered by algae bio fuel return to the road and are able to resupply besieged hospitals with much needed supplies like gloves, syringes and tubing now made from natural gas. In no time at all, the hospitals are once again clean, safe and ready to receive patients again. Back in the suburbs, the 21st Century home has transformed into an allotment, but the human toll has been great. Communities are fractured and families grieve the loss of loved ones. The world is struggling to find a new balance in this post oil era, and the quest to find it has decades to run yet.

Glimpses into the Future

A Look at a World Without Oil

More from Amazon and ebay 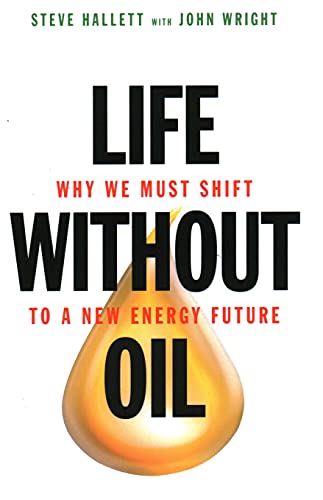 Life Without Oil: Why We Must Shift to a New Energy Future
Buy Now

Four decades on, and tensions around the world begin to rise. China in its desperation to acquire lithium invades Tibet and claims whatever they have for their own. The human population is booming, but many of the northern cities still sit empty, while major southern cities like Los Angeles now boast a population of more than 20 million people. Forty years after they were grounded, the jets return to the air, powered by bio fuel. The lack of oil jet fuel means that the skies are much cleaner, there’s no more dirty car pollution and no more factory pollution either. In North America alone, more than 3.5 billion tonnes of toxic pollutants have vanished from the sky each year since the oil disappeared.

Gradually, people filter back into northern cities and begin a remarkable transformation, turning roads and buildings green, by setting up new farms. Abandoned apartment blocks serve as ideal greenhouses. In downtown New York, the noise of traffic is a distant memory, instead replaced by the noise of people chattering as they farm their land. Old parking lots are transformed into terraced gardens and Central Park is converted into a huge 800 acre farm that helps to feed the growing flood of returning residents.

In the suburbs, the days of mass food deliveries are over and the old grocery stores that once contained tonnes of food sit abandoned and forgotten. All evidence of gas/petrol has completely vanished and the emergency crude oil reserves have run dry. The roads are still largely empty, with the exception of electric cars. These new cars are much lighter than old cars, which weighed in excess of 4000Ibs. The electric cars bodies are much lighter, on account of being made from lighter materials such as carbon fibre. These cars despite being powered by electricity are quite expensive and the lithium used to power them is still in comparatively short supply.

The new age of algae bio fuel has helped get large fleets of trucks and ships back on the road. In North America, huge bio reactors have appeared that help to convert more than 10 million acres of algae into all of the fuel that the country needs. Once it is processed; the algae is ironically pumped through the same pipelines that its oil predecessor once travelled through. In time, electricity helps to drive transportation, contributing significantly to the rebuilding of a global communication system. With trains among the most crucial vehicles out there, new cities grow up alongside railways, just like in the 19th Century, whilst others sit abandoned, forgotten, slowly returning to the Earth from whence it came. In many ways, this new world would be scary and it would take a lot of sacrifice to create, but it wouldn't be a totally undesirable place to live. Perhaps life in a post oil world wouldn't be so bad, as long as we make the right decisions.