Banning the Confederate Flag is Un-American

It is really ironic that people and groups who are the loudest in touting “tolerance,” are actually the biggest intolerant bigots. The latest target of the media hate propaganda machine is the Confederate flag. Following the false media portrayal of the unfortunate shooting in Charleston as an act of violence caused by the Confederate flag, many big companies, as well as the National park Service and other government entities, have banned Confederate flags and related merchandise. This is un-American, in direct violation of American freedom of expression.

One of the most important articles of the Bill of Rights, a feature which made the US exceptional among the nations of the world, is freedom of speech. America has always been a country where speech and expression are not censored, especially in matters of politics. This set the US apart from other countries where freedom of expression is politically controlled and censored. Banning flags or other symbols that “offend” some people (who are ignorant of the true meaning of those symbols) is a classic example of political correctness devolving into dictatorial censorship of anything that opposes the “party line.” It is no less tyrannical or un-American, just because the media controls the “party line” rather than the government itself.

I've seen the lame excuse that these are privately owned companies that are doing the banning, rather than the government, as if that somehow prevents the ban from being a violation of freedom of speech. This is an absurd excuse, especially in the cases of Amazon, Ebay, Etsy, and Zazzle, which offer selling platforms for private sellers. The companies themselves may hate the Confederate flag, but they should not be allowed to curb the rights of those who recognize it for what it really is, a symbol of a brave heritage of freedom, and dictate to the rest of us their political agenda. In addition, if they are allowed to ban the sale of Confederate flags, or any other media-created boogieman, then why can't Christian businesses refuse to cater to gay weddings, or provide other services that go against their principles? Favoring one ideology over another is directly against the First Amendment. 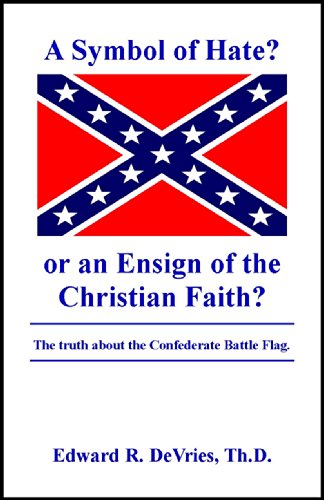 A Symbol of Hate? or an Ensign of the Christian Faith?: The Truth About the Confederate Battle Flag
Buy Now

Banning the Confederate flag is a sure way of fostering hate, not only regarding the current issue of racism, but regarding any conflicting ideologies. Once the media and corporations begin “taking sides,” and censoring anything that opposes their ideologies, the flood gates are opened for a culture of divisiveness an hatred between the opposing sides. Respect cannot be one-sided, and if political correctness calls for tolerance of a particular viewpoint, that tolerance must be reciprocated towards those who have opposing views. Companies and government entities should not be able to dictate the views, public or private, that people are allowed to have, nor to dictate what people can or cannot buy or do. Taking sides only leads to more and more censorship and eventually government control, which is a slippery slope which can only lead to complete curbing of freedom for anything except a very narrow, bigoted viewpoint which brooks no contradiction. This is so blatantly un-American. Free enterprise and the American dream are stifled by this hate-filled atmosphere of constant clashes between opposing ideologies, instead of the free open marked where everyone is allowed to pursue their dreams and freely express themselves, without reprisals for “offending” someone.

This media-promoted bigotry also foster hate by engendering bitterness. Forcing someone to conform to something that they are ideologically opposed to, will surely result in that person hating what they are forced to “accept.” People who see their heritage and culture publicly attacked and banned, will begin to hate their oppressors and the politically correct ideologies that are forced on them. How can disrespect and hate generate anything but disrespect and hate in return? Far from uniting the races, this only leads to more animosity and division.

The Confederate flag is not a symbol of hate to anyone who is educated in history, and not so bigoted that they can't see past their own biased notions. The real haters are the media and the corporations that cave to media pressure. It is really unfortunate that people are so blinded by media propaganda as to hate anything and anyone that disagrees with their blind ideology.

The Truce is Over

The Civil War and the reconstruction aftermath fostered a lot of sectional animosity and discord that lingered for years. But eventually, the United States emerged as a strong country able to stand on her own among the great countries of the world. (although it is debatable if the “Union” was really preserved, because the fundamental basis of free sovereign states united under a Constitutionally limited central government was destroyed). This united front was due in large part to what history professor Dr. Clyde Wilson called “The Truce.” The following observation clearly sums up the situation that enabled America to become a strong united country standing up to the rest of the world, a beacon of hope to the downtrodden citizens of other countries longing for freedom.

“The terms of the Truce went something like this. Northerners agreed to stop demonizing Southerners and to recognize that we had been brave and sincere and honourable in the war, even though misguided in trying to break up the Union. Northerners agreed also that Reconstruction was a great wrong that would not have happened if Lincoln had lived. And they willingly accepted Confederate heroes like Lee and Jackson as AMERICAN heroes.

For our part, Southerners agreed, in exchange for a little respect, that we were glad that the Union had not been broken up and that we would be loyal Americans ever after, something which we have proved a thousandfold since.

And both agreed that the war had been a great tragedy with good and bad on both sides, a great suffering out of which, thankfully, had emerged a better and stronger United States.”

Clearly, this truce is now at an end. Over the last few decades, Confederate history and heritage has been increasingly maligned, and openly attacked and ridiculed, resulting in nothing but division and discord. The country today is anything but “United.” Millions of Southerners who are loyal patriotic Americans (which is a big characteristic of Southerners in particular) today are seeing their heritage and culture destroyed and disrespected on all sides. This hurts the whole country, not just the South. Once any part of history is suppressed, the door is opened for suppression of the rest of it. You also can't profess multi-culturalism, while destroying particular cultures that you don't like. Either you accept all of them, or none of them.

America is billed as a democracy (although it's really supposed to be a constitutional republic). However the current atmosphere of political correctness is leading to a complete breakdown of the constitutional rule of law. Small groups and factions in the media are dictating to the rest of the country, controlling what we can and can't say, do and buy. Far from being “inclusive” for everyone, the United States is becoming more and more hostile. Soon it will either disintegrate into anarchy, with a multitude of warring factions completely opposed to each other, or a tyrannical dictatorship will be needed to hold all the incompatible factions together. The only other option is secession, which will preserve the culture and heritage of the South that is being systematically suppressed and destroyed, but will finish the dissolution of the Union that is already being dissolved by the political correctness ideology.

It is the height of hypocrisy to demand that a Christian business be forced to cater to gay weddings against their beliefs, but allow a company like Ebay or Walmart to ban the sale of Confederate merchandise. If a homosexual has the “right” to shop anywhere for a wedding cake, a Southerner has even more right to buy a flag or other symbol that represents his ancestry and heritage. Who determines where the line is drawn? Any time someone makes that decision, and takes sides in a particular ideological battle, the noose is drawn a little tighter on American principles of liberty. If we are dictated to by the media and other politically correct ideologies, and forced to conform to the narrow mold of thought and action that is in direct opposition to the liberal claims of diversity and tolerance, the line will be drawn against all liberty, and America will no longer be the “land of the free.”