The Art of the Spiel

Let’s face it, nobody, even the most zealous Big L Libertarian Party activist, really believes that Gary Johnson will be the next President of the United States. Unless, that is, one of the following scenarios plays out.

With that said, here are the projected outcomes and consequences of the 2016 Presidential Election processes based on the above specifications.

Hillary Clinton is so ecstatic at reaching her lifetime obsession with becoming the first female president of the United States of America that she finds it nearly impossible to control her forced high-pitched cackling laughter and fake smile. She will have her name and likeness etched into the history books alongside the likes of Queen Victoria, Katherine the Great and Joan of Arc for all time no matter what happens from this point forward.

And of course much continues to happen. WikiLeaks persists in its relentless Chinese water torture drip drip drip of ever more scandalous, embarrassing, deceitful email revelations. Longtime faithful toadies, fearful for their own skins, surreptitiously begin seeking immunity from prosecution for testifying and witness protection programs.

Madam President is so desperate to preserve her legacy that actual “governing” becomes irrelevant. Libertarians cheer as government goes into permanent political gridlock and people learn to work together voluntarily to solve problems on their own. It’s the best short term outcome for all freedom loving people everywhere while the First Female POTUS searches for guaranteed eternal fame. How, she wonders, have others overcome their own ugly realities?

The next step above star, above champion, above hero, she realizes, is martyrdom! Martyrdom conquers all. Martyrdom wipes away all the real-world dirt from a person and encases them in a glow of mandatory reverence. It’s beatification, glorification, canonization, Eternal Progressive Sainthood!

But nobody wants to be a Dead President martyr like Lincoln and Kennedy. She wants to be a “Living Martyr.” Reagan became a living martyr when the attempt on his life failed. That would be perfect for her. She would have to fake an attempt on her own life, of course, but faking had always come easy to her. The best plan would be to use a Southern Alt-Right Deplorable male redneck with contrived “links” to Nazi skinhead racist white supremacist militia groups as a dupe so her “living martyrdom” could be blamed on the Vast Rightwing Conspiracy.

The President, preoccupied with using her power, influence, control and Foundation millions in an attempt to stave off pending investigations, indictments and impeachment, is unaware that her devoted sycophants are humoring her while secretly preparing VP Whatshizname to replace her but no one will work with him because he’s been permanently tainted by Hillary.

Trump as Prez becomes so bigly full of himself it’s like pouring gasoline on an already raging bonfire, including his own, in effigy.

The media, during the traditional “honeymoon period” that lasts only fifteen seconds for Trump, dub him “45.” That’s as nice as it gets. As his full personality, now encumbered by nothing, begins to emerge the media also use words like arrogant, ego-centric, conceited, vain and narcissistic. He’s even cruder and more out of control than ever.

The Trump style of Presidential leadership is “Executive Orderdom.” He simply declares what he wants done. “Build the wall! Deport everybody! Ban Muslims! Prohibit refugees! Repeal Obamacare! Defeat ISIS! Cut taxes! Repatriate corporations! Or not! Forget what I said! Do something else instead!”

He ignores the Constitution, the House, the Senate, Democrats, Republicans. He is Captain Jean-Luc Picard of the Starship Enterprise: “Make it so!”

Democrats are so disgusted they refuse to work with him. Republicans are so embarrassed they refuse to work with him. Together they are the DC Establishment. They don’t like outsiders of any kind from any party. They want their familiar, firmly-rooted, financially beneficial money-for-power quid pro quo arrangement between politicians, corporatists, global financial institutions, Third World dictators and international banking cartels that guarantee them the power, wealth and ego fulfillment to which they’ve become accustomed.

Trump can get nothing done politically. His bills are ignored. No one will vote for or even sponsor his legislation. The courts reject his orders as unconstitutional. He tries to fire everyone who can’t be fired. Career bureaucrats, career civil servants, career fellow Republicans, career Supreme Court Justices. It just doesn’t work like The Apprentice.

The Donald isn’t winning. He gets bored and turns his attention to his real estate empire. He begins making plans to “privatize” the presidential residence and turn it into Trump White House and Casino Resort and Golf Course. He never wanted to be President anyway, he just wanted to win and now he isn’t winning.

So Trump announces his retirement and walks away. VP Whatshizname has been groomed to take over but no one will work with him because he’s been permanently tainted by Trump.

How can Libertarian Party standard-bearer Gary Johnson possibly win? The national divisiveness is so profound, so vitriolic, so violently expressed that most people won’t tell anyone, including the national polling organizations, who they really intend to vote for. They’re afraid of being physically attacked.

In desperation voters look around for a third party. They find the Libertarians. They don’t know what Libertarian is but they listen a little. These political Libertarians frequently describe themselves as “socially liberal and fiscally conservative” even though non-political libertarians hate that phrase because they reject the whole Left-Right political spectrum nonsense; the only spectrum they see is authoritarian versus libertarian.

But people, as usual, hear only the parts they want to hear. Republicans hear the “fiscally conservative” words they like and Democrats hear the “Socially liberal” words they like. So then all these Republicans and Democrats and Millennials and Boomers and Independents go off to the voting booths and quietly vote for the Libertarians thinking they’re the only ones doing it.

So what does Gary Johnson do as President? He appoints every Libertarian-leaning person he can find to be in charge of every Department and Agency he can and gives them strict orders to do nothing. No firing, no hiring, no raises, no promotions, no budget increases, no leadership.

Remember that the true government in every major country in the world is its permanently-entrenched bureaucracy. With no one telling them what to do or how to think the rank-and-file bureaucrats will become even more incompetent and failure-prone than they normally are. Through personnel attrition libertarians will get one of their earliest dreams – The State will begin to wither away and people will learn to work together voluntarily to solve problems on their own.

Sorry Greens, other than getting a few votes from the bottom of Hillary’s deck the Green Party’s Jill Stein doesn’t figure into this game.

None of the Above

Gary Johnson pulls enough electoral votes from both the left and right to throw the election into the House of Representatives. The Twelfth Amendment comes into play.

The House must choose the President from the top three vote-getters. Neither Major party will vote for the other party’s candidate because each wants to be the one to divvy up the spoils amongst their own kind. Finally they decide to compromise on Gary Johnson in the hopes they can properly corrupt him into their shared establishment.

But as President Johnson appoints as many Libertarian-leaning bureaucrats as possible so the state will wither away and et cetera et cetera as above.

Think Outside The Checkbox 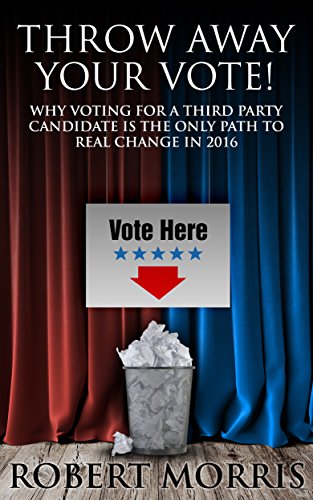 Throw Away Your Vote!: Why Voting For A Third Party Candidate Is The Only Path To Real Change In 2016
This new book shows how America’s two-party system is really a one party system because both support the corrupt political, corporatist, bankster, establishment status quo. Voting for one is voting for both. You’re throwing your vote away. Voting third party is the only way to crack the wall and let in fresh air – fresh ideas, fresh policies, fresh truths.
Buy Now

Where Are They Now?

If she won she became so consumed with protecting her legacy that she never noticed that she had been removed from office for being “mentally incapacitated” under the Twenty-fifth Amendment. Ever the legalistic deconstructor, she continues trying to get a judge to declare her a “Living Martyr.” Due to certain insulting leaked emails Catholics will of course not touch her.

If she didn’t win she blew out blood veins in her brain due to uncontrollable fits of rage and now exists in a vegetative state in a hospital. Bill Clinton appears to be a devoted husband with his frequent visits but the old geezer actually just comes in to hit on the nurses.

Trump tries to get back into television by creating a game show with himself as moderator called “President for a Day” in which the contestant who comes closest to his own political position-of-the-moment is declared the winner. The show never really takes off but he keeps pushing it anyway until he dies.

Decades later the show becomes a retro favorite for aging Millennials who have moved upstairs into their deceased parents’ homes while their own kids have moved into their vacated basements. The old Millennial Generation watches Trump’s game show on their iPads and tablets because they’re too old to figure out how to operate their new 3D HD full circle diffraction beam hologram projectors.

After Hillary dies America finally gets its first woman president. She’s a Fundamentalist Christian Republican. Hillary spins in her grave.

One RepubloCratic Party to Rule Them All