The Culture of Bullying, Backstabbing and Mean People – The New American Way?

A Culture of Mean

When did we become a Culture of Meanness? Even here at hubpages, where it is supposed to be a community of writers encouraging other writers I have found hubs while hub hopping that were nothing more than rants on how homely Kate Middleton is, in the writer’s opinion, as well as downright mean and hurtful comments on other people’s hub articles and in the forum.

Of course it is always easier for people to be mean on the internet when one can hide behind anonymity and make any snarky comment that comes to mind. I think if the person writing mean comments on other people’s blogs and sites were to stop and think “would I say this in person to someone I know?” Perhaps they would rethink their comment. I have seen and heard people say things that are a cruel and distasteful about people that are famous, as if being famous means people can say whatever they want about you, especially if you have hit rock bottom, (Britney, Charlie, Michael, and Anna Nicole). People seem to forget that these celebrities are still someone’s daughter, father, sister, mother, or brother. Would you want someone to talk about your family member that way?

It seems like more and more entertainment is centered on people being mean to each other. Popular shows like the Real Housewives of Orange County, Atlanta and New York, have turned back stabbing, name calling and all out physical brawls into “acceptable entertainment.”

I can remember being harassed and picked on in school when I was a kid, but at least once I got home I could escape it. Now, poor kids, have no relief. Text messages, Facebook, You Tube and Twitter ensure that the horror and humiliation can continue unrelentingly, 24-hours a day. In the cases of Tyler Clementi and Phoebe Prince, the bullying drove them to suicide.

All day long we are bombarded with negativity. From every echelon of society the ugliness is all around us. People can’t even have a lively debate about issues or ideas without it turning into hateful personal attacks. This is especially evident on news shows and in politics. Recently both Rush Limbaugh and Glenn Beck, made mocking comments about Japanese earthquake victims because despite the tragedy, they still continue to do ordinary things like recycle. First we have Limbaugh’s equally insensitive caller who said, “If these are the people that invented the Prius, have mastered public transportation, recycling, why did Mother Earth, Gaia if you will, hit them with this disaster?” Limbaugh replies with “He’s right. They’ve given us the Prius. Even now, refugees are recycling their garbage.” Laughing about it he continues with, “and yet, Gaia levels them! Just wipes them out!”

Not to be out done, Glenn Beck came out with this little gem, “I’m not saying God is, you know, causing earthquakes,” quickly adding that he’s “not not saying it either. Whether you call it Gaia, or whether you call it Jesus, there’s a message being sent. And that is, ‘Hey, you know that stuff we’re doing? Not really working out real well. Maybe we should stop doing some of it.’ I’m just saying.”

At the risk of falling into the same pattern of meanness, are Limbaugh and Beck complete idiots? Do they actually believe the words that come out of their mouths?” Seriously! 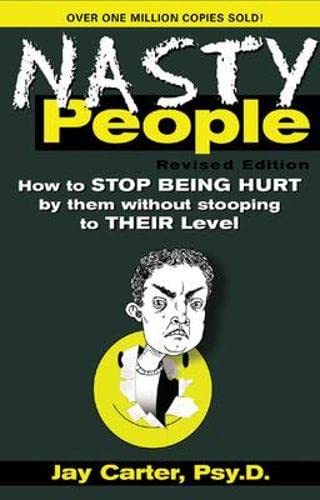 Nasty People: How to Stop Being Hurt by Them without Stooping to Their Level
Buy Now

A Plague of Ugliness

All of this constant meanness seems to spread like a pandemic and before you know it you catch yourself saying some mean, offhand comment about an acquaintance, a co-worker, a complete stranger, or even a friend.  Just today, I caught myself commenting on how annoying I found a “yuppie” couple and their “bratty” kids.  Maybe the children were tired. Maybe the husband really loved pink and those shorts made him happy when he wore them.  Who was I to judge?  I have certainly made some questionable fashion choices and my children haven’t always been perfect angels.

The other day, a friend of mine posted on Facebook how someone she knew said something hateful about the situation in Japan.  She said she wasn’t going to give into this culture of hate; that the cure for hate was love. She was going to fight hate with love.  Let’s all try that.  Let’s fight hate with love and see if we can’t change the world. If not the whole world than maybe we can change just our little portion of it.