Indo-China 1973 the Vietnam War was raging and the President of the United States,Richard Nixon has decided to carry out his "Madman Theory of War",the massive and indiscriminate carpet-bombing of Cambodia and of the infamous Ho Chi Minh Trail. Hundreds of thousands of tons of explosives were dropped,the equivalent of about five times the bomb dropped on Hiroshima.

The result was devastating,Cambodia was shattered.

And then in 1975 the bombing stopped,there was an eerie silence.The calm before the evil storm.

From out of the rubble an obscure group emerged,the Khmer Rouge,led by a charismatic leader Saloth Sar,he will later be known to much of the world as Pol Pot.

The Khmer Rouge practiced a mixture of Maoist,Stalinist Communism mixed with nationalism plus a little bit of racism.

They wanted to restore the glory of the ancient kingdom of Angkor Wat. They believed that outside influences from China,Vietnam and the Western World were destroying their country's' noble heritage. They dream of cleansing Cambodia of all modern influence and creating an all-Communist agrarian slave society in just one generation.

It started in the capital, Phnom Penh, on April 17,1975 the city of 2.5 million was forcibly emptied. The streets were filled,the evacuation took weeks,11,000 people died on the road of starvation,exhaustion,dehydration,women in childbirth bled to death in the dirt.

They were marched into waiting camps in the countryside,into a new society the likes of which we have never known.
The cities were emptied,they became ghost towns.
All links to the outside world was cut.

Foreign diplomats were driven in trucks to the boarder,then out of Cambodia.
The boarder was sealed.
Cambodia was entombed.

Life in the camps was hell. Unending work,hunger and fear.
Family relations were forbidden.
Funerals outlawed.
Any sign of love or grief brings swift punishment.
Sleep was officially banned,only rest allowed.
Children were forbidden to love their parents.
Husbands can meet their wives only once in a month.

"A young boy smiled at me while we worked",said a girl, "and he was killed".

All the books in the library and National Archives were burnt. Religion was banned. From "Year Zero",all past knowledge was illegal.

Then the mass killings began. At first they used bullets to kill their victims. But later,in order to preserve ammunition,they used the head of hoes to break the skulls of their victims
Every night people were picked in the work camps,killed and then buried in mass graves.

An average of 1,000 people were killed everyday. It would last for four years.

No one was safe. An organization called S-21 tortured,mutilated and executed "special targets": Anybody who knows modern skills or knowledge;Doctors,Lawyers,Technicians,Civil servants,Priests,Buddhist monks,even people from within the Khmer Rouge itself.

And their families were not spared. Children and babies were often the first to be killed,fathers came last.
Out of a population of 8 million,some say about 2 million perished.

Cambodia's Curse: The Modern History of a Troubled Land
A generation after the Khmer Rouge, Cambodia shows every sign of having overcome its history--the streets of Phnom Penh are paved; skyscrapers dot the skyline. But under this façade lies a country still haunted by its years of terror. Joel Brinkley won a Pulitzer Prize for his reporting in Cambodia
Buy Now

The End of the Evil Storm

Driven by age-old grievances,Pol Pot wanted to reclaim land once held by ancient Cambodians. He launched a number of brutal cross-border attacks against Cambodia's historic enemy,Vietnam.

On December 25th 1979 the Vietnamese struck back with "Operation Blooming Lotus",a full scale invasion of Cambodia.

The Vietnamese attack was swift,sure,massive and very effective. A classic military success.

The Khmer Rouge was overwhelmed.

Phnom Penh,the capital city was captured in less than 2 weeks.

The Pol Pot regime was finished.

What the Vietnamese found were scenes of unspeakable carnage from a country under lock-down for four years.

Many Cambodians fleeing from the fighting fled into Thailand,others found their way to deserted towns and cities to try and rebuild shattered lives.

The Khmer Rouge retreated to the Jungles of SouthWest Cambodia where they continued fighting against the Vietnamese and remained a political and military force.

Get More Details In This Book 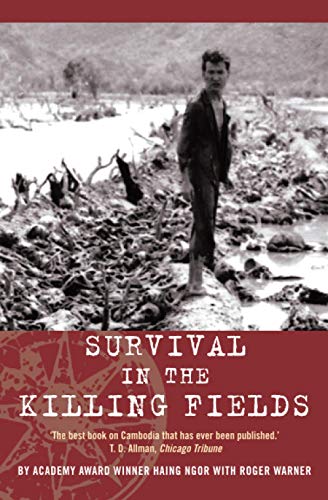 Survival in the Killing Fields
Nothing has shaped my life as much as surviving the Pol Pot regime. I am a survivor of the Cambodian holocaust. That's who I am," says Haing Ngor. And in his memoir, Survival in the Killing Fields, he tells the gripping and frequently terrifying story of his term in the hell created by the communist Khmer Rouge. Like Dith Pran, the Cambodian doctor and interpreter whom Ngor played in an Oscar-winning performance in The Killing Fields, Ngor lived through the atrocities that the 1984 film portrayed. Like Pran, too, Ngor was a doctor by profession, and he experienced firsthand his country's wretched descent, under the Khmer Rouge, into senseless brutality, slavery, squalor, starvation, and disease—all of which are recounted in sometimes unimaginable horror in Ngor's poignant memoir. Since the original publication of this searing personal chronicle, Haing Ngor's life has ended with his murder, which has never been satisfactorily solved. In an epilogue written especially for this new edition, Ngor's coauthor, Roger Warner, offers a glimpse into this complex, enigmatic man's last years—years that he lived "like his country: scarred, and incapable of fully healing."
Buy Now

In 1997 Pol Pot was put under house arrest by elements of his own Khmer Rouge. An old and frail man,he had become an object of pity and disgust. He was without remorse and unapologetic till the end,he believed he did more good for his country and referred to the death of millions of Cambodians as "mistakes of policy implementation".

"Look at me,am I a savage? I came to help my country and not to hurt people".

He died in April 1998 in a simple wooden thatched hut deep in the jungles of Cambodia. Not long after,the Khmer Rouge surrendered and peace returned to this ravaged country.

Most of the people who were responsible for the mass killings have never been put on trial or brought to justice. The spirits of the dead are still crying.