Climate Change will Multiply Violence Around the Earth

Oh, my goodness, the hot weather is sucking my strength as well as other people's strength. Waking up in the middle of the night uncomfortable by the wetness of the sweaty body; then getting up tired and sleepy because the night did not provide enough rest to start a morning with high temperatures that actually control mood levels... Oh, I do relate this experience with the news that is altering the sensibility of peaceful citizens, and on the other hand, excusing the violent nature in those that live an aggressive life.

Climate Change will Multiply Violence Around the Earth

Changes in the weather

It is being spread that changes in the weather are feeding large-scale conflicts and aggression between individuals, from wars to rapes. Supposedly a groundbreaking study published relates and quantifies for the first time the effects it will have on the future of the planet.

Aggression, like anxiety, is a reaction that we can have on stimuli and situations that affect us which is a normal behavior and necessary for survival.The important thing is to know how to manage aggression and regulate it. When a person does not have the ability to control their impulses and let aggressive reactions to surface indiscriminately, it has negative effects.

For God has not given us a spirit of timidity, but of power and love and discipline.

The faces of violence

Violence has many faces. From conflicts between countries and civil wars; to rape and gang fights. All these forms of violence, from the interpersonal, to that exercised by the states are egged on by changes in climate. Temperature increment feeds some humans violence, and droughts which multiply ethnic violence.

There are also factors that can cause aggression to become pathological, such as alcohol and drugs, in addition to general central nervous system stimulants or emotional factors such as neurosis, depression, bipolar disorder, etc..

BE ANGRY, AND yet DO NOT SIN; do not let the sun go down on your anger, and do not give the devil an opportunity.

Do you perceive mood changes with high temperature?

Countries on the Equator

If climate changes are affecting moods by increasing aggressiveness, I questioned what about those countries that lie on the Equator (imaginary line stretching around the middle of the Earth, separating the Northern and Southern hemisphere). These 12 Countries or States receiving more sun rays are:

Location of the Equator countries

Do you think that the location has to do something with aggressiveness?

Journals, studies, researches, news and history has identified the world's most violent countries, based upon a local domestic level of violence, crimes and human rights violations against its own people and nation.

Did you notice many of them receive extreme sun rays? Oh, just saying. The 10 most aggressive countries in the world are listed by the Global Peace Index. In this hub they are introduced In alphabetical order, as follows:

Location of the 10 most aggressive countries 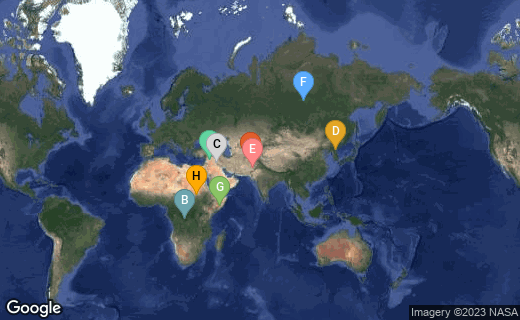 Give and accept love

Aggressiveness expands, spreads, and destroys. It is not the solution to anything, mainly it hurts our own-selves and those who love us.

If you perceive that aggressiveness takes hold of you, my dear friend I invite you to search for help and surrender yourself to God.

Beat the climate change with love!