In Defense of Millennials

(Disclaimer: This article reflects my personal views on the generational divide and doesn’t necessarily represent all millennials.)

If you’re a member of any kind of social media, then there is a good chance you’re familiar with the memes that label millennials, those born roughly between 1980 and 2000, as lazy, entitled, and/or ‘wussies’. Generally, these are shared by someone of a previous generation who remembers the ‘good old days’. This is a fairly common passing of the torch. The older generation, wearing their nostalgia goggles, criticizes the younger generation, while the younger generation dismisses the complaints as curmudgeonly. It’s a cycle that will repeat until the end of humanity. The difference this time, however, seems to be exposure. For the first time, through the internet and social media, the previous generation can unite to form a narrative about their successors. Articles will be written, memes shared, politicians catering to the soon-to-retire for votes.

Millennials are well aware of this perception of them, to the point that many of us have accepted it as a fact too, that America’s greatest generation has come and gone, leaving only lazy people to watch the world crumble around them. Some might take the stance that Generation X and Baby Boomers are the ones that raised us and that, any complaints they have should be directed at their parenting style. But I’m not going to make that argument; because I contest that we’re already working just as hard as those who came before us.

You know that method of parenting where you tell your child that they ‘can be anything’ they want to be? It’s a sweet sentiment and it led a lot of my generation to college, in the hopes of pursuing something more. The mentality is that, if you study hard and get a degree, you’ll find a career you love and make money doing it. Some of us were lucky enough to have financial help from our parents. Some of us were not. And, with a larger pool of college grads, the unlucky ones have left an impact. Those with debt essentially start their lives with one hand tied behind their back, simply because they wanted higher education. I’ve spoken before about college tuition, but the point is that this massive debt load is a burden that weighs heavily on Millennials, a metaphorical ball-and-chain that we must carry with us when we want to buy a home, provide for our children, and contribute to the economy. Anyone who says college or student debt is easy, hasn’t experienced either.

Some might say that higher education is a privilege, not a right. So the debt is our own fault. And, I’m sure some sort of case can be made for that argument. However that doesn’t excuse the rapidly ballooning tuition rates, nor does it help inform first-in-the family college students about the real dangers of debt. How many people at that age are well informed about their financial future? We’re too concerned with making it to our next exam or finding a girlfriend to think about just how crippling our student loans will be four to eight years in the future. The fact of the matter is that loan companies are taking advantage of this inexperience and locking in lifetime customers. It’s the same reason why college campuses are targets for credit card companies. Give them a card when they’re of legal age, but before they know the real weight of owning one. It’s a sneaky practice whether you blame the debt on the student or the company.

There is another saying that goes out to lazy children: “go out and get a job”. Generally it’s spoken to a basement dwelling twenty-something playing video games in his underwear. Forgive the stereotypical example and remember that the economy crashed in 2008 and had, before that, been hemorrhaging jobs since the early 2000s. What this means is that going out and getting a job wasn’t as easy as it used to be, especially when previous generations were holding off from retirement because they were worried about the economy. So college grads were forced to accept jobs that had nothing to do with their degrees. And, the days of getting a higher wage, just because you have a degree, are long gone. Take it from a fiction writer who has spent the last thirteen years working in tech support; our aspirations and hard work studying amounted to very little, if anything, in the real world.

Inflation tells us that we’re making a lower minimum wage than some of the previous generations, with more hours and less benefits. Which then forces both partners in a relationship to work, shoving ideas of a family to the back burner. So, we’ve worked hard for our education, to settle for jobs we don’t like, for wages that aren’t livable, while chipping away at the mountain of debt our aspirations left behind. You can start to see why this generalization of millennials as ‘lazy’ is so insulting.

The Next America
Buy Now

I mentioned before that many of us grew up with the mentality that we can be whatever we want to be, if we put our minds to it. With parents who lived through prosperous times, and higher education more prevalent, we figured success was a slam dunk. The only reason you wouldn’t be successful is if you didn’t pursue your dreams. This created a counter-mentality that, when my dreams are not achieved, I have only myself to blame. I didn’t work hard enough. I didn’t push long enough. I wasn’t good enough.

The fact of the matter is that there are external forces, outside our control, that affect success. Even the most determined of us can still get beaten to a pulp by circumstance. You need more than gumption to succeed. You need raw talent and a boat-load of luck. Those three rarely align, leaving the rest of us to work harder because we’re placing the blame squarely on our own shoulders. I’m not saying failure is always someone else’s fault. I’m saying it’s not always yours.

And, this sense of personal failure extends to our sense of self-worth. People tell us that we should be grateful for whatever job/wage that we have. And it has allowed the businesses hiring us to get away with inhumane practices. When asked what wages we think we should be making, we low ball it because we’re afraid they won’t hire us. And, by forcing employees to keep their wages secret from each other, it prevents us from discovering the wildly unequal rates for people hired within months of each other. They can also avoid paying us for doing extra work because that extra work is considered ‘valuable experience’. Experience that we know, based on the job hunt, does actually have value. The problem is that it never seems to get to that moment of pay-off. Since any other company you go to can legally do the same thing. Or the same company can move you to a different position, and not raise your wage. They can afford to do this because they know, and we know, that there are a million other candidates waiting outside the door to fill your job. We no longer have the unions to fight on our behalf, and in many instances, we watch people who do ask for higher wages, go down in flames. So we accept our fate, doing more and earning less, while outliers think we’re lazy.

We have to save the world too!?

So, climate change is a big enough issue that we can’t blame any one generation for it. Some might try, but in my mind, it was a series of events and decisions that led to where we are now. Whether you blame someone or not, we’re on track for this generation to be the last hope of fixing it. That might sound dramatic, and we might fail spectacularly, but there is no question that this is bigger than just a wounded economy or a reduced workforce. Fixing something on this scale might seem insurmountable, but I feel that we’ve progressed enough, technologically, to make something like that happen. What we don’t need, however, is the previous generation telling us it doesn’t exist. Our generation has no choice but to address this, to wade into waist deep muck to try and clean up the place. Hearing you on the sidelines saying we aren’t waste deep in muck, isn’t helping. So either help us, or step aside.

There is a fear that the children who play video games and watch television are rotting their brains and wasting their lives. We are one of the first generations to grow up with these higher-tech forms of entertainment and it already shows. We’re in the midst of a creative revolution, with more variety, and more saturation than ever before. An age where a book about children murdering each other (The Hunger Games) became a global phenomenon, rather than getting delegated to required reading in school classrooms (Lord of the Flies). We appreciate the arts to such a degree that conventions like Comic-Con have transformed from product expositions to pilgrimages with the power to sway industries. We have embraced our creative sides, using the internet to form groups and monetize our hobbies, when the traditional publishing and television industries left us hanging. We do all this while still working those aforementioned jobs we hate, for low wages, and under a mountain of debt.

How hard do you think Millennials work?

I’m not going to stand up and declare millennials to be the greatest generation, because ultimately, the cycle will repeat. When we’re old, we will think the next generation is too lazy, too offensive, and too ungrateful. I’d like to think we will eventually evolve beyond this rinse and repeat mentality, but that might be asking a lot. So, instead, all I ask of the previous generation is to have some perspective. You don’t need to pat us on the back or give us a gold star for every minor accomplishment. But you also don’t need to waggle your nostalgic memories in front of us, as if you all got it right. Let’s all just acknowledge that being an adult is hard, and our youth was so much simpler.

The Impact of Climate Change 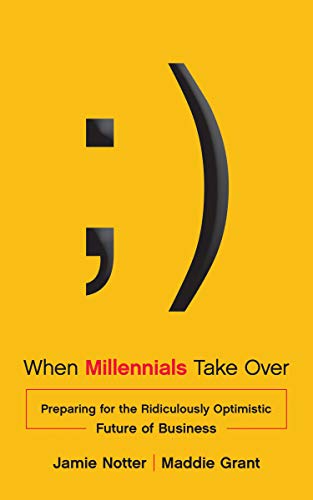 When Millennials Take Over: Preparing for the Ridiculously Optimistic Future of Business
Buy Now