The proposal to ship freed slaves to Africa was the plan of Thomas Jefferson.The first arrivals of these free slaves started in 1821, to what is now Liberia. Portuguese contact with Liberia in 1461 named it Costa da Pimenta, Pepper Coast, because it had an abundance of grains of melegueta pepper. The Dutch built a trading post there in 1602 and the British did the same in1663. In 1847 Liberia declared itself a free nation.

The British formed the colony of Freetown, for the free slaves in their country in 1787, in Sierra Leon. Most of these slaves were those who helped the British fight the American Revolution War.

Paul Cuffee, an African-American and 9 other blacks, used his own money to bring 38 freed slaves out of the United States and deliver them to the British Colony of Freetown, aboard his flagship, the Traveller, in 1811. He later died in 1817.

Colonization was put into effect due to the rapid increase in the slave population in the 1800's and the fear whites had of free slaves convincing the owned slaves to rebel. In fact this is exactly what happened in Virginia, known as the Gabriel rebellion of 1800-1802.

THE GOOD OF LIBERIA

The first President and first Lady of Liberia was Joseph and Jane Roberts. Joseph was the first ACS governor of Liberia in 1841. In 1856 he became president of Liberia college and then became President of Liberia again from1872 -1876, when he died.His second wife Jane, was born in 1818 and was the daughter of a Baptist minister of Liberia.Roberts had written to the United States asking for help to purchase more land for the 5,700 population.

The slave importation was stopped in 1808. The President of the United States had sent naval squadron to the African water to apprehend illegal slave traders and allocated $100,000 to resettle recaptured slaves in Africa.

Today Liberia is one of Africa's culturally rich and diverse countries The name Liberia means "land of freedom."

July 26th is the 164th independence day for Liberia.

William Bull is Liberia ambassador to the U.S.and he says, "this holiday is used to bring together Liberians in the U.S."

There is still the constitutional right to vote problem in Liberia. Their constition says that anyone who declare allegiance to another country automatically loses his or hers citizenship. Without citizenship you can not vote.

Ellen Johnson Sirleaf, a Harvard Kennedy School alumna, is the first woman to be elected of an African nation. She has endured death threats, incarceration and exile. She is the 24th President of Liberia.

It's been seven years since the fighting in Liberia has ceased but the bones of those slaughtered, including previous Presidents, are being found everywhere.

Hopefully this country that holds many stories of slavery, of returning home, of being free, can now begin to heal and to prosper within itself to make it a great nation for Liberians and those who wish to visit. There is so much that can be offered from this country in the richness of their history to their style of music and the choice of clothing. Its all there for the viewing.

WHERE FREE SLAVES WERE TAKEN 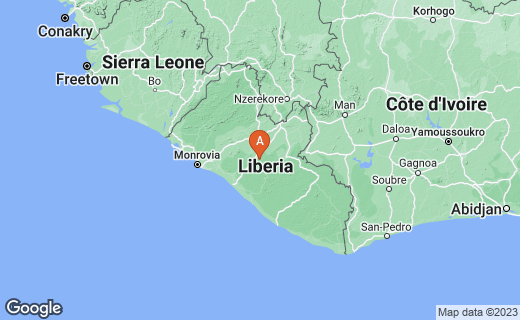