Faces, Facts and Facets of the Libertarian Movement

Well, this ain’t any of that. This is about different types of types of Libertarians. 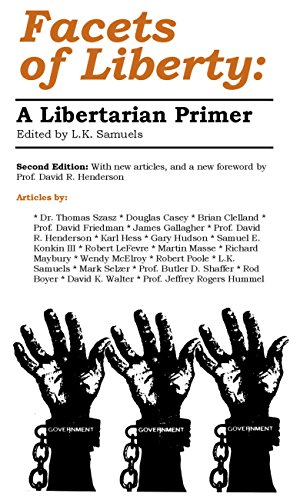 Facets of Liberty: A Libertarian Primer
A Libertarian Hall of Fame? It would be a (victimless) crime for American libertarians to overlook our own history. This collection of articles focuses on the libertarian, voluntaryist, classical liberal, individualist, anarchistic movement of the 1960s, predating the Libertarian Party. Here be articles by such libertarian thinkers as political adviser Karl Hess, entrepreneur Douglas Casey, law professor Butler Shaffer, philosopher Robert LeFevre, psychologist Thomas Szasz, Reason magazine founder Robert Poole, libertarian feminist Wendy McElroy, agorist Samuel Edward Konkin III and anarcho-capitalist economist David Friedman among others. As libertarian economist John C. Goodman said, “In the history of politics, there is only one fundamental, abiding issue: It is individualism vs. collectivism.”
Buy Now

The Many Libertarian Types

In 2015 The Libertarian Republic website posted an article headlined “The 10 Most Common Types of Libertarian.”

In fairness it presents common “types,” not common “individuals.” And it’s posted under categories “Political Comedy” and “Political Opinion.”

(The author is identified only as “Guest Post” but most libertarian longtime online social media messaging mavericks can figure out who she/he likely is.)

Also in fairness these particular ten common libertarian types are based on the author’s personal encounters in the real world. (For whatever it means, it should be noted that the article has attracted 7,807 Views over the years but 0 comments.)

Encounters in the nether world of social media is a whole ‘nother experience which see later.

So first let’s do a rapid rundown of the Guest Post’s personal and oftentimes idiosyncratic three-year-old list of her/his Usual Suspects.

Note that the Guest Post’s list was never meant to be exhaustive nor is this article’s appended list below meant to be an update, correction, expansion, criticism or praise of that list. And of course virtually every longtime libertarian can add their own types not mentioned herein.

The following “10 Most Common Types of Libertarian” are from the Libertarian Republic article but the synopses of each are your Libertarian Opinionizer’s own.

These Big-L political activists trying to change the world through politics alone are all that most people know about libertarianism.

These young college activists trying to change the world through outreach booths and pamphleting on campuses across America are all that most Millennials know about libertarianism.

These are typically converts from the Ron and Rand Paul campaigns, think they’ve found a home in the LP but because they can never shake their conservative political traditional worldview keep drifting back to their old familiar GOP.

They’ll admit that the LP has always supported gay rights and pot legalization but just aren't far enough left on everything else. Given a choice they’ll abandon the non-aggression principle, the invisible hand and individualism and rush back to the Democrats every four years

A general term for libertarians who gain a measure of notoriety as bloggers, YouTubers and meme-makers, begin amassing fans and Facebook friend requests and become guest speakers at movement events. What Grandpa used to call “A big duck in a little puddle.”

The dark underbelly of libertarianism, the crazy-eyed true-believer libertarians who can’t explain why they believe what they believe but will fling “statist” at every libertarian who disagrees with them like monkeys flinging their poo.

The Free State Project proposed that 20,000 libertarians move to New Hampshire, take over the state government based on sheer numbers and create a Libertarian State so libertarians will have an answer to that persistent drumbeat “gotcha” complaint from libertarian-haters: “Name one place in history where libertarianism has ever been tried!”

Bonus: Go Away & Leave Me Alone!

Still from the article, these are the libertarians who just want to “live and let live” and therefore don’t fit any of the ten categories. These libertarians don’t want to impose their beliefs on anyone and are therefore seen as selfish, uncaring and anti-social by outsiders who think that’s how a libertarian society would work. What it really means is that outsiders don’t get voluntaryist libertarians. Their loss.

NOTE: You can read the full article (and uncover the author) by Googling “The 10 Most Common Types of Libertarian.”

There are many cartoon putdowns of the so-called types or kinds or categories of libertarians kicking around online since the early days of the Information Superhighway.

Today’s Modern American Libertarian Movement (a term coined by Brian Doherty in his book Radicals for Capitalism) long ago left the “ignore” phase, is still wading its way through the “laugh at” and “fight you” stages but has its sight unshakably set on some as yet unknown future “win” point.

A general term for those who claim the libertarian label and the non-aggression principle yet still want a minimal government. These include many if not all LP members, classical liberals, activists in the Libertarian Wing of the Republican Party, Objectivists, Left and Right political Libertarians and many others scattered throughout the other categories.

Believes ALL human interactions, not just economic, should be voluntary. That means a free, peaceful, non-coercive society in which even voluntary socialists and voluntary communists may create a co-op, kibbutz, communal farm or worker-owned business right next door to a laissez-faire business, church, charity, barter exchange, trade fair or any other kind of for-profit or nonprofit activity. NAP for everyone.

These are not Ayn Rand fans, known as Randbots or Randroids who embrace the person rather than the philosophy of Objectivism she created. Objectivists work philosophically hard to understand the principles and concepts and apply them to all aspects of their lives. Even though Rand and therefore many of her followers reject libertarianism many libertarians do not reject her or her rational belief system.

Mutualists are libertarian socialists who hold one major position in common with libertarian capitalists: they both reject the state. In a state-free society where all human interactions including economic actions are voluntary it becomes at least theoretically possible for worker-owned enterprises and traditional laissez-faire free market enterprises to peacefully co-exist. There’s still that pesky private vs. public land ownership thing however.

Agorism, created by Samuel Edward Konkin III (SEK3), seeks to achieve a voluntary society by growing the underground black market to the extent that The State’s authority and power become so undermined that government itself rightly comes to be seen as a criminal activity. This “counter-economy” would abolish taxation and replace all former government institutions with voluntary institutions.

A newer, lesser-known approach with a great name. As formulated by the Zero Aggression Project “Post-statists advocate a forward-looking approach, where history has discarded The State in favor of consumer-controlled governance.” They essentially redefine “government” as a voluntarily funded non-monopoly non-coercive entity with the sole purpose of defending individual rights based on the libertarian Non-Aggression Principle.

Don’t be confused, libertarians don’t truck with the left’s groupthink collectivist “identity politics” but do frequently embrace the philosophic or economic teachings of prominent libertarians and therefore self-identify as “Randian” or “Rothbardian” or “Hoppeian” or “Misesian” and so on.

This is the most widely encountered type of all, which makes “common type of libertarian” a truly oxymoronic phrase. Individualist libertarians are a smorgasbord of freedom philosophies, taking a full course meal of Ayn Rand, a breakfast of Mises, munching a lunch of Rothbard or the Friedmans, supping on old favorites Adam Smith and Frederic Bastiat and maybe making a midnight snack of warmed up Golden Age libertarian science fiction master Robert A. Heinlein. They don’t fit into any specific category because they’ve at least nibbled on virtually all of them.

The most mentally muddled and self-contradicting kind who begin by saying “I’m a libertarian but…” and follow this by some non-libertarian non-NAP self-cancelling status quo claptrap such as “We still need government to make everybody equal” or “to correct the failures of the free market” or the like.

And don’t forget to bicker and browbeat as well. If there’s any question just reread “Individualists” above.

Libertarianism begins with a lively “live-and-let-live” lifestyle and goes on from there. Libertarians are not herd animals.

The Libertarian Republic Ten Types This is the 2015 article based on the personal experiences of “Guest Post” as she/he made the rounds of libertarian events and activities over the years.

More Types of Types of Types If all the various ways of describing the different “schools” of libertarians haven’t been covered here’s a contemporary list that include some not covered elsewhere.

Basics of Libertarian Philosophy A guide that promises to deliver “A huge subject broken down into manageable chunks” for those who want to understand the philosophical concepts beneath the political.

Surprise, Liberals, There ARE black libertarians