Non-Violence - Why and How

We are uniquely capable, rational beings who have conquered the world around us like no other living being. Something that we are all so proud of.

While it's true that our modernization and technological prowess are indeed noteworthy achievements, it is also true that we are capable of tremendous violence - something that should make us hang our heads in shame.

Some say that the violent side of us continues to grow unbridled as a stark reminder of our animal past. While it is true that animals are capable of violence, it is mostly employed for meeting their food requirements. Carnivores hunt and pin down their prey brutally to snuff out their lives for a delicious meal but rarely do they kill for no reason. In fact, there are occasions when even the most ferocious lioness exhibits gentle compassion awakened by maternal instincts, and nurtures a young oryx calf (a type of antelope on which lions usually prey) instead of devouring it. In recent times we have the well chronicled story from Kenya of a lioness ‘Kamunayak’ adopting oryx calves not once but on six occasions, enduring hunger and even risking its life in the process.

What about homo sapiens ?

We usually politicize the answer by pointing fingers at others for perpetrating violence and ignore the violence unleashed by us as justifiable requirement for a higher purpose – defending the country, punishing deviants, ideological compulsions, defending our dignity etc. We forget that violence is violence and we will all have to suffer together the combined result of the violence unleashed by us for all the “valid reasons” that we have.

If we just glance at the newspapers or news channels on television, we will find the result of our violence spilling all over and staining the news a deep macabre red that we have come to accept as normal. And if we look at violence in its broadest sense – not just terrorist violence and the violence of international conflicts, but violence against women, children, the oppressed, domestic violence and also violence against animals, as well as our plundering assaults on the environment and mother earth itself (all for “justifiable “reasons), we can only hide our faces in shame. And because we all resort to violence, even if in its mildest forms, for one reason or the other, we cannot naturally think of a solution. At best we end up with convoluted arguments to absolve ourselves of the responsibility.

But if we are really serious about turning over a new leaf, so that we of the twentieth century can claim to have truly evolved to a higher plane and left behind the vestiges of our animal past, there are signposts and methods.

President Obama is said to have been influenced by the life and works of Mahatma Gandhi. During his visits to India he visited the room in which Gandhi stayed in Mumbai and also Rajghat in Delhi where Gandhi was cremated.

Over the years, many leading lights from all over the world from all walks of life have talked in glowing terms about Mahatma Gandhi. My favorite is this quote from Albert Einstein, paying his tribute to Gandhi on hearing of his death. “Generations to come, it may well be, will scarce believe that such a man as this one, ever in flesh and blood, walked upon this earth.”

In India we refer to him as the Father of the Nation and have issued commemorative stamps and coins and named numerous roads and buildings after him. But although he is still venerated and continues to inspire many Indians, there are also those who, in an increasingly strident competitive world, consider Gandhi outdated for our times and ignore his teachings without even understanding it.

Which makes me sad. Because if one were to read Gandhi’s works, there is an inspiring enunciation of the principles and methods to eschew violence, and adopt non-violence as a strategy to live a better and more effective life. Gandhi’s own life and his leadership of the Indian Independence movement is a practical example of his theories in action. It’s not often that one gets to read or hear of theories enunciated by actual practitioners.

Although non-violence got to be recognized by the world because of Gandhi who was it’s greatest exponent, it was not something invented by Gandhi, For non-violence or Ahimsa is a part of the religious tradition of Hindus, Jains and Buddhists and was practiced in India for centuries. Gandhi however fashioned it into a tool for social and political action.

Non-violence is not abject surrender or superficial holding back. It is a philosophy arising out of the acceptance that violence does not solve any problem for anybody. Gandhi objected to violent methods because “when it appears to do good, the good is only temporary; the evil it does is permanent.” In fact he made this the central core of his life as can be seen from this quote on handling despair: “When I despair, I remember that all through history, the ways of truth and love have always won. There have been tyrants, and murderers, and for a time they can seem invincible, but in the end they always fall. Think of it – always”

Non-violence becomes an attitude to life – of peaceful co-existence with the rest of the world while abjuring the very thought of violence as a method of solving problems. It would require tremendous clarity, courage and strength of character to adopt non-violence as a creed, but then mankind is capable of immense feats – like going to the moon - then why not make an attempt to free the next generation from the scourge of violence in all its manifestations?

It is possible, provided we realize that, as Mahatma Gandhi said, “ we must become the change that we want to see.” Which means we need to change our internal world to see the external world change. We have to abandon the appreciation of aggression and violence in all its forms. Can we stop celebrating victories and dominance and building up a subtle hype around aggression and violence and start appreciating the sensitive and the gentle, and not just the brash and the insensitive, the collaborative and not only the dominant, the pleasant as much as the vituperative and so on? Not difficult, if we realize that our jungle days are far, far behind us, and in today’s interconnected world there are no real enemies to fight, except the demons that dwell within us. 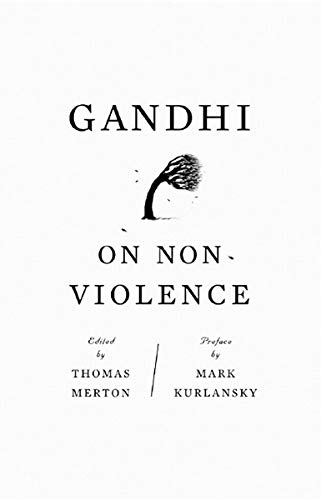