Green Living: Our Attempt At Living Off Grid With Renewable Energy

Getting Off Grid Is Not As Hard As It Sounds

The idea of living off the grid, without electricity or water supplies being taken care of by someone else, can be intimidating. When we hear about living off the grid, or when we see it on television, it always seems to be some perfect lifestyle with all the right equipment in all the right places at the right times. There always seems to be lots of money around for whatever is needed. I’m writing to let you know that you can begin your transition to off-grid living without nearly as much money as you may think you need. If you want to live off-grid, independently, you can do it! This article will be an overview. I look forward to covering many of these topics with individual articles in the future.

I am writing this from my experience. I lived off the grid for over three years. I left this home and property behind for various reasons, most of which had nothing to do with the lifestyle. My wife and I had moved to Washington State in 1998. A vacation to Seattle and Everett had left us in love with the area, and we found land was much more accessible than in Florida where we had been living.

Once we were moved and settled in, we started looking for land. At that point, we hadn’t planned on going off grid. We simply wanted a nice piece of land to enjoy. The plan was to get a piece of land, and then see about getting a home built on that land.

Eventually, we purchased 45 acres of mostly wooded land on the west-facing slopes of a small ridge. The land was located in Whatcom County, outside of a town called Everson, just south of the Canadian border. It was about 25 miles inland from the coast, overlooking miles of farmland and eventually Puget Sound.

Access to our land was an old logging road that utilized an easement over our neighbors land. The road was just about a half mile long to the building site. Old logging road translates roughly to “gravel road with lumps, bumps, and washouts”. It was awesome.

Eventually, we would have a 1300 square foot home there, with a generator and battery set, a small wind generator, a well with a one thousand gallon water tank system with gravity feed pressure, a septic system, propane appliances, and a beautiful airtight wood stove. It was heaven in many ways.

We Learned Along The Way

There was a lot to learn in this adventure, and we were lucky to meet so many helpful people who taught us important concepts. Such as... first, before you build ANYTHING on raw land, determine where your septic and well will go. In most cases, it is MUCH easier to change the location of your sheds and home than to find another suitable spot for your septic drain field and reserve location. That’s right, we had to have two locations that would pass the perc test. Also, on sloping terrain like we had, the well drilling company had only a few places where the rig would actually setup properly. We were very lucky on that score.

So we got our well in, I believe it was pumping quite nicely around 150 feet or so. Good clean water that never dried up or even faded in the three years we lived there. We also got our septic sites approved. The primary was pretty close to where we hoped we would build, as was the well, so we were lucky again. That fact is though, even if it doesn’t work out perfectly, you can get it to work out.

Books From My Off Grid Living Library

While the well and septic adventures were under way, we had been in discussions with various companies to have a pole barn built. A very good learning here is that you can be TOO detail oriented when getting a pole barn built. The first few companies could never come up with an affordable price for us because I kept going over the top with details and alterations etc. The result was always an estimate we could not accept. So when my wife finally stepped in and forbade me asking more than three questions of the next company representative, we finally made a deal.

Somewhere during all the planning we had also been getting estimates for the cost to bring in electricity and telephone and cable. We learned that they could all come up in one trench, but would be separated by depth in the trench. Fine. But the cost was prohibitive on our budget at the time. Since it would all have to come up about a half mile, the estimates were coming in around $20,000. Too much. We talked and talked between us, my wife and I, and decided to look into providing our own power with a generator at first, and with renewable energy down the road. We were going off grid.

We were committed to doing this for ourselves, to do it in our meager budget, so we would not be calling in the ‘green energy companies’ or the ‘renewable energy companies’ at this point. In fact, we would not even be setting it all up at one time. Realizing we could develop our green electricity slowly, starting with dirty brown generator power at first, gave us the freedom to enjoy our dream. I knew we could find solar panels for sale at any time, and had even started to hear the term affordable solar power. As it would turn out, wind would be more appealing in the short run, and I never got around to those residential solar panels.

Some Things I Learned Faster Than Others

I’m not going to lie to you about this. It took a lot of research to get up to speed on the concepts involved. But none of what I learned or did is beyond the abilities of most people. After all, I was an accountant at the time, not a general contractor!

So we bought a generator. Not even a giant one, the first one was a portable contractor’s generator. I hate to say it, but I was not into machine maintenance at the time, so we eventually burned it up. Oops. Live and learn. But it got us through converting our pole barn into a home. When the contractor was done with our pole barn, it was an empty shell with three small windows, two garage doors, two man doors, and a dirt floor. It was a two story model (see the pictures), but had no second floor installed either. We did all the rest of the work ourselves. The next generator was a little more robust, and I performed regular maintenance on it. Better.

We got a used propane stove for the kitchen, and propane space heaters, and lived with them for a while. In the very beginning, because we were so anxious to get to living up there (selling our home in town), we even lived with oil lamps for a while. Getting propane in place, with the same tanks you use on a barbecue grill in the beginning, was easy. It got us cooking, and some heating, in short order. Later, I installed an airtight wood stove that was wonderful for heating the place. Firewood is an entirely different subject though.

Water was a matter of running the generator for about a half hour to pump water from our well up the ridge about a hundred feet to our thousand gallon water tank. Gravity would then provide water pressure to the house. It worked great. Be sure to bury the water lines though, or things get a little dicey when the temperatures hit the freezing mark. For hot water, I installed a Bosch Aquastar tankless heater, running on propane. That thing is awesome! Never running out of hot water is sweet.

Eventually, we would get a propane powered refrigerator, and a high efficiency washer and dryer. We went with propane wherever we could, and high efficiency or low voltage whenever it required electricity. To provide clean household current that would not damage sensitive electronics like our computers, we installed a battery bank with 12 batteries and an inverter from Trace Engineering. I think they are called Xantrex now. The inverter set I bought also included a integrated battery charging module.

Once a week, we would run the generator for three or four hours. During that time, we would do our laundry (because the washer was such a drain on the battery bank), refill the water tank (the well pump used 220 volts and ran only 30 minutes), and recharge the batteries for the coming week. Due to careful planning, sort of, we only needed electricity for lighting, television, and computers during the week.

Some of the lighting in the house was low voltage, with the transformers stripped out so I could run it directly from the battery bank, in case I had to take the inverter system off line. In other places, we used low wattage bulbs, and cfl’s. It wasn’t luxurious in the mainstream sense, but we were loving it. 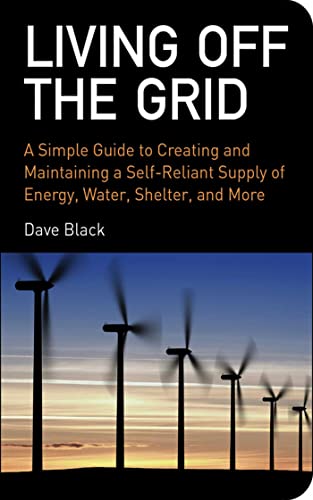 I Would Do It Again!

I learned a lot in this experience. I did a lot of things wrong, and never even got around to doing other things. For example, by the time we sold the property, I had bought two wind generators but only installed one of them (Southwest Wind Power, 400 watt models). It was not an easy life and should have been easier than it was. I blame myself for that.

It just comes down to learning the right ways of doing things, and learning that there will be times when you might not feel like doing something, but you had better do it, or you will be uncomfortable later. Firewood is a good example of this. Firewood should be taken care of during the spring and summer, when the weather is nice, and you can get to the fallen trees in the woods. The problem is that when the weather is so nice, you want to go off and play instead. Not good.

How do I feel about living off grid now that I am living on the grid in a city? I would do it again in a heartbeat! I have every hope of getting another crack at it. There are many things I would do differently, and many things I would do the same. Mostly I would be doing the same things, but I would do them differently. Get it? I would take care of things more quickly, and get systems in place before I moved on to the property. I would make an annual schedule for myself that would keep me focused on things to be done during nice weather so as to be comfortable when the weather turns nasty. But no matter what, I would do it again in a minute. It’s the most wonderful feeling to live off grid and be taking care of yourself.

HubPages is a great way to improve your writing, learn lots of new things, and even make money by writing online. It's free to join, and free to earn! Start with the HubPages Tour if you like, no obligation.