Gun Control Is all About Control

Regardless of their views on gun control, the politicians have taken an oath to support and defend the Constitution. Unless they amend the Bill of Rights to repeal the Second Amendment, they have to duty to abide by it. Violating their oath is treason.

I've seen several comments lately in newspapers and forums, by gun control proponents, claiming that the NRA (and the gun owners they represent), are "holding them hostage," and "controlling their lives." Nothing could be further from the truth. Gun owners just want to be left alone, not to be told what they can and can't own, or to be punished for crimes they didn't commit. It's not like the "gun lobby" is pushing for laws that would force everyone to own a gun. If you hate guns, you have the right not to buy any!

It is amazing that the gun haters try so hard to take away the rights of others, While complaining that their rights are being violated. Actually, that is just an excuse to justify their urge to control the lives and liberties of others. They despise individuals standing up for themselves, since that doesn't fit into their socialist scheme, where everyone relies on the government, or the community, for all their wants and needs.

Of course, some of the gun banners hold a personal grudge against society, like McCarthy and Giffords. But blaming innocent people and their possessions isn't going to right the wrongs they suffered.

There are some people who truly believe the propaganda that gun control will make the country safer. And many people have a paranoia and fear of guns that no amount of reasoning can overcome. What they don't realize, is that even if they never want to go near a firearm, let alone own one, by curbing the rights of others and weakening the 2nd Amendment, they are actually weakening all their rights. They also overlook the fact that these laws have no effect on criminals.

There are several ways that the gun control proposals would actually control the lives and livelihoods of millions of Americans. Limiting the right to self-defense is a major consequence of these proposals.

The Right to Self-Defense

The right to self-defense is the keystone of all the other rights. Without it, the "inalienable right to life, liberty, and the pursuit of happiness" becomes a meaningless phrase. Even if the 2nd amendment was repealed, the right to keep and bear arms for self-defense would still be valid.

The second Amendment doesn't confer the right to keep and bear arms on anyone. It merely protects a right that already exists. The Bill of Rights was intended to protect the rights of the "little guy" from the encroachments of the majority. This is a major reason why it is so vital to defend the 2nd amendment. Weakening any of the Bill of Rights opens the door to weakening all of them, hurting all Americans. Judging by the threatening hate-filled comments posted by liberals on boards like the Huffington Post and Washington Post, it is only common sense to expect those threats to be carried out by the party in power, if the checks to that power are not upheld.

Some people, through choice or necessity, hand over their right to self-defense to the government. But everyone shouldn't be forced to risk their lives doing the same thing. As the saying goes, "When seconds count, the police are only minutes away." No matter how efficient law enforcement is, they can't be everywhere all the time (nor would we want that "police state"). Until all criminals are disarmed, which will (can) never happen, (especially with the government engaged in drug trafficking to gangs), law abiding citizens should never be forced to give up adequate weapons for protecting themselves.

A Way of Life

Firearms play a major part in the lives of millions of. Besides the thousands of workers in the gun factories and their supporting industries, we have all the firearm dealers and sports shops, many of which are small mom-and-pop businesses. Banning one of the most common types of firearms would have a huge impact on these people. Why should they lose their means of earning a decent living, just to satisfy the gun grabbers? There are also many farmers and ranchers, who practically never step out of the house without a firearm. Carrying a gun is a way of life for them. Many of them live in bear country, or areas where other predators are prevalent, and they always have to be prepared as they go about their daily work. It doesn't hurt to do a little hunting between chores, either

Hunting season is the high light of the year for millions of people. Hunting offers a way to supplement the food bill. It also gives hunters healthy exercise of body and relaxation of mind, as well as camaraderie among friends. Hunting strengthens the bond between parents and their children, and offers many life lessons for kids.

Gun control advocates usually claim that they aren't trying to ban hunting guns. But the rifles they classify as "assault weapons," are commonly used for hunting. Semi-automatic have less recoil, are lightweight, and are easier to handle, making them ideal for small shooters, and anyone that doesn't want to lug around a big heavy rifle. Any gadgets or cosmetic features (that can be added to almost any gun, by the way), that makes a rifle look tactical, or "military style," do not make that firearm any less suitable for hunting.

New York is offering a $500 reward for tip-offs regarding "SAFE" Act violations. I'm sure there will be plenty of scumbags willing to turn in their innocent neighbors, friends, and families. It doesn't seem possible that hearsay and anonymous tips could have any legal basis to warrent arrest and confiscation, but that's exactly what happens in a communist state.

In California, gun registration records are being scrutinized to confiscate thousands of legally owned firearms from gun owners, who at any time had any sort of mental treatment, regardless of whether or not they currently pose any threat. The results of that, of course, will be to discourage people who need help from seeking treatment, making society less safe.

New Jersey police have made several raids, arrests, and confiscations, just on the basis of false accusations and other pretexts, without even a search warrant. (Of course, the victims should have refused entrance, since the cops didn't have a warrant).

The government has a large interest in gun control as people control. Deprived of the ability to defend themselves, the citizens are forced to depend upon the government for protection. This is one more step toward total dependence on government, turning free citizens into helpless subjects. Even if it is not "tyrannical," it is the nature of governments to constantly try to gain more power. The founding fathers foresaw that, which is why they included the right to keep and bear arms in the Bill of Rights, as an individual right that "shall not be infringed."

Actually, enforcing the proposed laws would require a Nazi- or Communist- style police state, with neighbors and family members turning against each other, police raids and arrests of innocent people. Do you think you are safe because you don't own guns? Think again. All it takes is a jealous neighbor or ambitious social worker to accuse you of having illegal weapons, and you'll find yourself facing a trigger-happy SWAT team, or over eager cops ready to march you off to jail regardless of your protests. This is already happening in some states: see the sidebar for details.

Of course, the government pretends that they are not trying to take away our guns, they just want to pass "common sense" regulations for our "safety." But each new law and ban brings us one step closer to total disarmament of the law-abiding citizens. (In fact, some of the most rabid gun-haters, like Feinstein, have admitted that they are really working for this goal.) It also paves the way for stricter control over all the other aspects of our lives.

The government also turns to gun control as a way to divert attention from the real problems, which they are unwilling or unable to fix.These include – a lack of jobs, plus a welfare system that creates a culture of laziness and "entitlement," lack of morals in today's society; even lack of basic respect for human life; lack of proper care for the mentally ill; a criminal justice system that turns violent criminals back into society, where they commit more crimes.

The gun control proposals affect everyone, even those who don't own guns. Of course, gun owners need to take responsibility for the safe keeping and handling of their firearms. But responsibility and common sense can't be legislated. The gun ban crowd has to stop looking for more laws and more government control, as a solution for their problems.

As Benjamin Franklin said, "Those who would give up essential Liberty, to purchase a little temporary Safety, deserve neither Liberty nor Safety." We are all adults, and need to start taking responsibility for our lives and our destiny as free citizens, instead of looking to the government to provide a sense of security (which isn't even real) in exchange for us becoming subjects of an increasingly more controlling olligarchy. 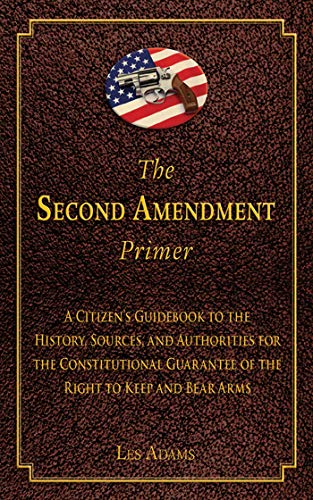 The Second Amendment Primer: A Citizen's Guidebook to the History, Sources, and Authorities for the Constitutional Guarantee of the Right to Keep and Bear Arms
Buy Now