Help for the Haiti Earthquake Victims

Help for the Haiti Earthquake Victims ~ With the earthquake of January 2010, many of the Haitian people are in desperate need of food, water, medical care, clothing, shelter, and other basic needs. While reading this page about Haitian food and maybe even trying a few recipes, my hope is that you will consider this fundamental need of millions of people who suffer from lack of enough nutritious food and want to help them in some way. Many members of Squidoo are working together to assist in the relief efforts in every area of need. Check the links below to take you to several pages about the project.

March 2011 ~ As I now think about the people of Japan and the mass troubles they are having with the earthquake and tsunami, I am reminded that the people of Haiti are still struggling to survive. It takes a long time to recover from something so devastating. The people of Haiti and Japan are both in my heart and prayers as I hope they are to you, also.

June 2012 ~ When the dust settles, it is easy for those of us who live far away from these events to simply forget or to think that everything is okay now. People still need love, care, and needs.

Haitian food picture thanks to Wikipedia. Photographer's description from Wikipedia: "Haitian cuisine ... in this photo there is rice and beans. Pink salad, which is similar to potato salad, but has beets which turns it pink. Baked macaroni. Fried plaintains. Fried chicken and pork. Green salad. Sauce and piklis, which is similar to coleslaw without the mayonnaise, but its also very spicy."

Haiti and the Dominican Republic share the island of Hispaniola. The first peoples of the island were mainly hunters and gatherers of native vegetation. The Arawak and Taino indiginous tribes grew and ate a variety of fresh tropical fruits and vegetables such as mangoes, pineapples, papayas, guavas, coconuts, citrus fruits, avacados, bananas, beans, cocoa, corn, and sweet potatoes.

After Columbus landed on the island which he called La Isla Espanola or the Spanish Island in 1492, Spain claimed it for themselves renaming it Santo Domingo. Unfortunately, the Natives of the island and African workers were forced into slave labor by the Spaniards on large plantations growing sugarcane and rice. The Africans contributed taro roots, pigeon pea seeds, ackee fruit, okra, and new spices to their rice dishes. France took over the island around the early 1700's bringing their share of food styles and tastes. Even after Haiti gained its independence in 1804, evidence of the vast assortment of world food influences is found in their delectable cuisine.

Because of the vast poverty throughout the country, the 7.5 million Haitians rarely have meat in their diets. Instead, their meals consist of mostly native fruits and grains. The people have a very difficult life due to poor farming conditions and unhealthy drinking water. The poor farmers have hard labor working with hand tools and little water for irrigation. Life isn't much easier in the cities. Unemployment rates are very high, and malnutrition is common among children in particular.

Photo from Wikipedia: Haitian Rice & Beans are one of the most common dishes among the people of Haiti.

"Then the King will say

to those on his right,

'Come, you who are

blessed by my Father;

the kingdom prepared for you

since the creation of the world.

For I was hungry and

you gave me something to eat,

I was thirsty and

you gave me something to drink,

I was a stranger & you invited me in,

I needed clothes & you clothed me,

I was sick & you looked after me.

27 more Haitian Recipes may be found at Island Flave.

Photo: Plantains, a fruit similar to bananas, are a favorite dish when fried. 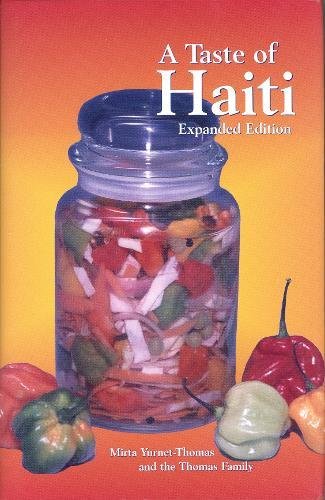 "About 61 percent of the population of Haiti is classified as undernourished by the World Bank. This means they do not receive adequate nutrition in their diet. Of children under the age of five, about 28 percent are underweight, and nearly one-third are stunted (short for their age). ~ Haiti is the poorest country in the Western Hemisphere, with unemployment rates as high as 70 percent of the population. Many families cannot afford healthy, vitamin-enriched meals, although mangoes are frequently eaten to avoid a Vitamin A deficiency. In addition, only about one-quarter of Haitians have access to adequate sanitation. ~ Although the country is surrounded by an abundance of water, it continues to lack water in both quantity and quality. Poor nutrition and sanitation have caused Haiti to have one of the youngest life expectancies. In 1998, the average life expectancy was 54.4 years of age."

Quoted from "Politics, Economics, and Nutrition" from the article Food in Haiti on the Food in Every Country website. I wanted to note that the above quote was written before the earthquake of January 2010. Conditions have become immensely worse since that time. Please consider helping however you can. Thank you.

An organization that I have worked with at their distribution warehouse is GAIN (Global Aid Network), which is a division of Campus Crusade Ministry. Since January, they have been collecting resources and funds to be sent to help the people of Haiti. They held a benefit concert along with many drives to collect donations. Their missionaries have distributed needed supplies and love, and will continue to do so. Click on the "GAIN" link above to find out more.

In Focus Haiti: A Guide to the People, Politics and Culture
Buy Now

"Then the righteous will answer him,

'Lord, when did we see

you hungry and feed you,

or thirsty and give

you something to drink?

When did we see you

a stranger and invite you in,

or needing clothes and clothe you?

When did we see you sick

or in prison and go to visit you?'

"The King will reply,

'I tell you the truth,

whatever you did for one of

the least of these brothers of mine,

Please leave a message so I know you were here. :)