Gary Johnson, former two-time Republican Governor of New Mexico as well as former two-time Libertarian Party presidential candidate (some Republicans and Libertarians both call him a two-timer) is now running for a US Senate seat in The Land of Enchantment, which is not some kind of imaginary libertarian utopia as many might think but is actually the official nickname of his home state.

And at this writing he’s looking great in the first couple of polls.

It’s likely that most political viewers will remember Johnson for his now-infamous response to a gotcha question sprung on him by a liberal MSNBC talking head who asked him out of context, “What would you do about Aleppo?” He replied “What is Aleppo?” Some supporters have suggested that he might have been thinking that “a lepo” was a politically incorrect name for a person afflicted with leprosy.

Hopefully this time around if someone asks him about Albuquerque he won’t respond with, “Who is Alba Kirky? I don’t think I’ve ever met her.” 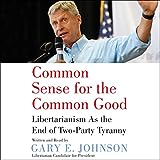 Common Sense for the Common Good: Libertarianism as the End of Two-Party Tyranny
Are you an individualist thinker when it comes to politics but you’re just not aware of Gary Johnson or not sure about his Libertarian politics? It’s easy to quench your desire for knowledge with a mere $1.99 Kindle download of his 2 hour and 34 minute audio book. In it he explains what should be obvious to everyone by now that the two-party system is dysfunctional for the simple reason that this severely limited dualistic approach to issues just doesn't reflect the wide-ranging diversity of political, social and cultural viewpoints that have always been present in our society. There is a rational and workable solution to what he calls the “Two-Party Tyranny”—Libertarianism.
Buy Now

However, while his run for New Mexico’s US Senate seat may not be common knowledge outside of New Mexico’s borders a first poll in August brought good news for Gary Johnson. Seems that 21 percent of those polled said they would vote for him while 39 percent went for incumbent Democrat Martin Heinrich and a mere 11 percent opted for Republican Mick Rich.

And that poll came out even before Johnson started campaigning. A more recent Lux Research poll from September 16-17 showed similar results with Johnson up a point at 28 percent and the other two down a tick.

With “Undecided” hovering somewhere around 30 percent there seems to be plenty of elbow room for Libertarian optimism.

Candidate Johnson actually leading the Republican candidate in that first poll was greeted as a “shock poll” and “a doozy” by the libertarian Reason magazine online blog. Others might point out that the poll was extremely meager, consisting of an Emerson College e-poll of 500 registered voters

Still, in a state where people only barely out-number cattle this might just be a significant result after all. At last report cattle still haven’t achieved voting status in New Mexico.

So why is he running at all? As he said in his audio book created near the end of his 2016 Presidential run:

“It should come as no surprise that so few of our public officials are listening to us.”

So maybe they’ll listen to him? Johnson is running on a platform that includes balancing the budget and the legalization of recreational marijuana. There are definitely some problems with these positions.

Balancing the budget has long been a favorite chant harped on by conservative Republicans and Classical Liberals seemingly forever and it just never seems to get done. While the national budget was balanced for a while during President Clinton’s reign Johnson himself failed to do it in his own state when he served as a two-term Republican governor from 1995 to 2003.

Again from the Reason blog, channeling from a National Review article:

Others, of course, defend Johnson by saying that the Democrat-controlled legislature stymied him at nearly every turn. The question that then begs an answer is how anything would be different in the nation’s capital if New Mexicans sent their favorite Libertarian Party son to the Senate. The best that could be expected might be that he could replace “Dr. No” Ron Paul as “Senator. No” Gary Johnson.

One problem with his stance on legalizing marijuana is that it plays directly into the hands of the earliest simple-minded anti-libertarian stereotypical cliché that emerged seemingly the day after the Libertarian Party was founded in 1971:

“Libertarians are just Republicans who want to smoke pot.”

Another problem: the Fairly Balanced cable channel Fox News reports that Johnson “owned $250,000 in the Nevada cannabis company Kush Inc. He also reported capital gains of at least $100,000 from stock in the company Cannabis Sativa, where he previously served as CEO between his 2012 and 2016 presidential runs.”

The allegation here would be that he wants to use his political influence to legalize pot for his own personal gain like any other common Republican or Democratic politico. Johnson’s response, reported in the same article, is that “he sees no conflict of interest because he has always supported the legalization of marijuana.”

A bigger problem comes from libertarians themselves pointing out that “legalization” always means passing laws and rules and regulations that would control and tax all aspects of commercial marijuana, thereby funneling yet more money into government coffers where politicians will spend two dollars for every tax dollar collected and then go looking for yet more of our personal activities to tax.

The libertarian alternative to legalizing cannabis is decriminalizing cannabis. The first means “tax it and treat it like alcohol” while the latter means “remove all laws against it and leave people alone.”

Other typical clichés abound for people who can’t or won’t think beyond conventional political wisdom. It means many of the same old people are asking the same old questions. Like can a Libertarian really win or will he just be a spoiler for the Republicans?

Mainstream thinking never seems to ask if the Republican will be a spoiler for the Libertarian candidate, which would mean that, especially in this case, it’s the Republican candidate who should drop out and endorse Johnson.

Describing himself as “Fiscally conservative and socially cool” in a campaign video Johnson responds to all of his supporters with a simple statement of reality:

“I could be the swing vote in the Senate.”

Mainstream Libertarian Party members and voters and others who supported Ron Paul in the past are certainly buoyed that Paul’s son, Republican US Senator Rand Paul of Kentucky, has already endorsed Gary Johnson.

It would be a great big win for all libertarians whether they’re the limited government kind or the anarcho-capitalist kind or the apolitical voluntaryist kind if the party could actually elect its first ever national candidate to public office. Previously, the highest elected Libertarian Party officeholders in America where Dick Randolph and Ken Fanning who served in the Alaska House of Reps in the late 1970s to early 80s.

But Johnson knows it will be an uphill battle, just like his uphill climb of Mt. Everest. A review from Broadway World of his audiobook which Johnson narrates himself understands this:

“He firmly believes that, if the rigged electoral polling and debate processes were fairer, the vast majority of Americans would come to understand that their beliefs and values are best represented by the Libertarian Party.”

Perhaps Gary Johnson’s best quality is that he attracts a wide range of personalities. Not the kooks and crazies that status quo politicos paint them to be but simply individuals who just don’t fit into the cookie cutter world where the Republican-Democratic established order wants everyone to stay.

Here’s how Johnson’s first campaign rally in late August, characterized as an event that ”had all the zaniness befitting a third-party underdog,” was described on the candidate’s official website:

“There were aides from the days when Johnson was a Republican. Then there were the Libertarians. There were the guys in Western wear who looked like they keep a lot of their money in gold bars, and guys who looked like they had skied a 100-day season and keep most of their money in cryptocurrency. There were advocates for election reform, drug reform and immigration reform. One woman even sang to the former governor during a question-and-answer period.”

Johnson is and has always been a combination of an easy-going fun-loving “every man” that makes his foibles and flubs easy to forgive while simultaneously being a serious issue-oriented candidate willing to take on the tough issues like immigration—“Practical Reform. No Walls. Assimilation.”—Education—“Teachers want to teach...not test. Parents want their kids to be students...not statistics.”—and Foreign Policy—“The objective of both our foreign policy and our military should be straightforward: To protect us from harm and to allow us to exercise our freedoms.”

Still, a Reason review by Brian Doherty of the book on which Johnson’s audiobook is based characterizes him this way:

“The book is rife with the sort of goofy charm that makes some fond of Johnson and some annoyed with him, the spirit that has him bite his tongue on TV news.”

In this age of outsider politicians (Donald Trump, Bernie Sanders, Alexandria Ocasio-Cortez) Gary Johnson’s Senate run should be a fun one to watch at the least and at most a loud and compelling signal for a major restructuring of American politics if he wins.

Gary Johnson for US Senate Official Website where everyone can learn, contribute, volunteer, support the Libertarian Party candidate who could and frankly should become the swing vote in the US Senate.

Gov. Gary Johnson for US Senate! Facebook page A place for Gary supporters to mingle, discuss, debate and support the Libertarian candidate for US Senate from New Mexico and get the latest news.

Reason Hit & Run Blog Interview headline: “Gary Johnson: ‘This Is Conceivably About Being the Swing Vote in the Senate’ and further says “Am I going to be the most hated guy, or am I going to be the future of politics if I'm elected?”