Race Dynamics on the Internet

Hopefully, the New Elite will rise above greed as a motivator, and become stewards of an internet driven society which benefits all.

Traditionally, legislators and lawyers have been the gate-keepers of our way of life in the United States of America. With the Horatio Alger’s "pull yourself up by your own boot-straps" mind-set, the best and the brightest of American children from every background were persuaded by parents, teachers and mentors to pursue a career in law with hopes of entry into privilege and power. Nevertheless, the hidden curriculum was the prevalent underlying belief that any American can grow-up and become president. This doctrine blends well with a child's imagination. However, in the twenty first century: hooded teens and twenty-something’s are re-writing this curriculum with elaborate computer codes which are becoming a hot (non-traditional) commodity. The going to undergrad then law school formulas, etc. are shattered by the reality that, the only thing that a college education guarantees is debt. In this age, youthful computer programmers who write inventive code are those who hold the keys to a techno-dominated sphere of data streaming centered about the world-wide-web and our daily lives.

The application of computer technology changed the rules of the game. Those traditionally outside the loop in industry cannot be regulated by the old rules of the former industrial aristocracy. With the rise of the various giants of Silicon Valley: 'Supply-side’ or ‘Trickle-down/ Reagonomics' will be exposed as a sham. Many who write computer programs have become massive giants in industry. Most are business neophytes whose jargon includes codes. They team with wolfish investors to form a new elite. Some of these are reluctant (at first) to be made to conform to the rules of old-money. The new elite are not driven by an oppressive regime but are founded upon color-blind internet traffic.

Hopefully, the vortex of the ancient rich shall not pull the jurisprudence of the tech-world into its realm of evil. Hopefully, a new system of justice will prevail. Hopefully, the ultra-rich will not be shielded behind computer codes as law has done for centuries. Hopefully, the New Elite will rise above greed as a motivator, and become stewards of an internet driven society which benefits all.

What is the historical significance of today's youth being more technologically advanced than the aged in society?

The internet functions much like a living organism and responds as such; creating a forum for all. Traffic flows in ebbs and crests; naturally as waves of water, sound, electricity or light. The flow of traffic on the internet becomes a living entity that makes kings and queens and establishes emperors and empresses.

The rules of the racism game are changing.

Many are becoming sensations as a result of visitors from cyberspace. A new type of provenance is emerging that is enriched by clicks, shares, hits, likes and favorites. Traditional barriers as accent, skin color or the shape of one's eyes are no longer an obstacle, once you are in cyber-space. This makes exclusion by traditional means obsolete. No longer can there be restrictions into certain places.

The Social Dynamics of Exclusion

Exclusion from a level playing field gives a certain segment of society, a head start resulting in an oligarch system which institutionalizes inequality as seen in American History. The functionality of the World-Wide-Web unravels an archaic method that excludes certain segments of society. Traditionally, exclusion was used as a mode of operation applied by an oppressive state in order for the powers that be, to remain entrenched. As racism exclusion is a system implemented to control people and is codified in the legal structure of a nation's constitution.

The Declaration of Independence written by Thomas Jefferson reads, "All men are created equal." However, the interpretation of men was originally meant to represent white men only (not Africans, nor women or Indians). Eighty some odd years later Abraham Lincoln reiterated this sentiment in his Gettysburg address, "Four score and seven years ago our fathers brought forth on this continent a new nation, conceived in liberty, and dedicated to the proposition that all men are created equal." Where these definitions similar or changed for Lincoln? More importantly, is the definition of men interpreted the same today, as it was in 1776. Hopefully, the moral law that dispenses justice as an artesian well will quench the thirst for justice for every citizen of Earth.

The absence of justice produces the proliferation of tyranny; which results in oppression, inequality, hunger, poverty, crime, etc. Justice must fade if those who advocate inequality shall remain empowered. A government for the people of the people and by the people is a myth. Ruling classes through the world relied on excluding people from entry into the most influential realms of society. These traditional barriers are quickly becoming arcane because of the accessibility of knowledge and the freely open connectivity to information that anybody can obtain.

Racism must either mutate or become an orphan on the internet. The World Wide Web does not facilitate racism as traditionally laid by oppressive government in the past. The proverbial melting pot has become a stew, whose ingredients can no longer be hidden through exclusion. Racism is becoming increasingly antiquated and obsolete with the onset of recent technological advancements. People from every culture add to overall content on the World-Wide-Web.

Internet traffic acts as a living organism which seeming thrives on a laissez-faire principle. As a result we now have popular terms as going viral which updates Horatio Alger's scenarios from the 19th & 20th century to a current made good category of the sometimes effortless occurrence, making going viral a new source of success.

Those that wish to foster the illegitimate child of racism consciously choose to dwell in a modern dark age. Even racists are flagging their own as inappropriate on the World-Wide-Web. The consensus of acceptability rests against the Hitlers and the David Dukes whose power seemed insurmountable in the past. The internet taps into the basic human instinct to receive and give information. This internet driven society is not driven by the same impetus that held the racist power structure together. Basic content and how to information is unbiased. Nevertheless, racism on the internet seeks for a place to abide but it has no standard place of acceptability and has become a mutant that must be uncovered.

A Dream Realized in One's Lifetime! 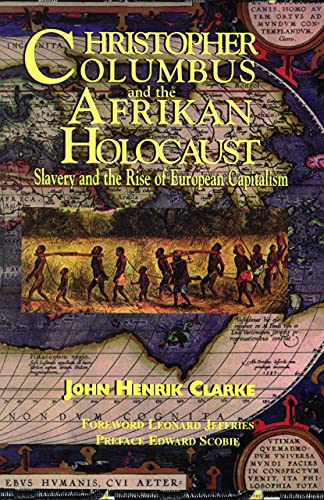 Christopher Columbus and the Afrikan Holocaust: Slavery and the Rise of European Capitalism
Buy Now