India at a Glance ,Location,Size,Population,Neighbours,Language etc.

Location and Shape of India

India is located just at the mid position of south part of Asia continent.India is a vast country.It is situated at the north area of Indian ocean. India is located on the Indian Plate which is a northern part of the Indo-Australian Plate . The equator lies in the country. The country is situated between 8°4'N and 37°6' N latitudes.In respect of longitudes there are 68°7' E and 97°25' E border the country. India has a broad area of 3, 287, 782 sq. km. or 1, 269, 219 sq miles.From north to south India is 3214 kms or 1997 miles and from east to west it is 2933 kms or 1822 miles. India is the seventh largest country in the world after Russia , Canada, China, United States of America ,Brazil and Australia. It has a coastline of 7,517 km.

This country is like a human being having two arms in west and east.It has the head in form of Jammu & Kashmir.The south of India is triangular in shape having circled by Arabian sea in west, Indian ocean in south and Bay of Bengal in east. Andaman and Nicobar Islands in the Bay of Bengal and Lakshadweep Islands in Arabian Sea are part of the Republic of India. These are the Union Territories of India. 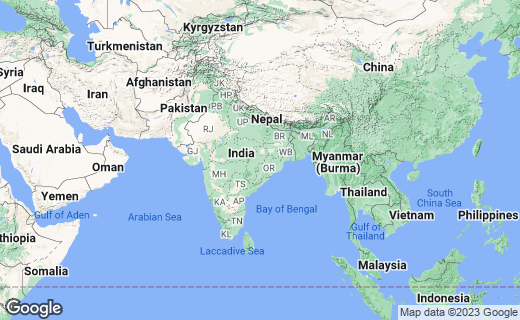 States,Union Territories and Neighbors of India

India has now 28 (now 29)states in total.There are seven Union Territories like Andaman & Nicobar Islans, Daman & Diu, Dadra & Nagar Haveli, Lakshadweep, Chandigarh,Puducherry and Delhi.Delhi ,the capital of India is now stamped as NCT or National Capital Territory.Language wsa the main issue for the divisions of states.The Indian states are

There are countries like Pakistan and Afghanistan in the west, China and Nepal in the north , Bhutan in the north east ,Burma in the west, Bangladesh in the east and Ceylon in the south as its neighbors.There are not only foreign lands but also natural strengths those have been guarding India since its origin.The Himalayas in the North guards India like a sleepless gigantic bodyguard.Three water bodies are also sources of relief for the Indians and India.

Delhi is the India’s capital.The largest town of India is Mumbai . The largest state of India is Rajasthan.The smallest state of India is Goa.The most populated state of India is Uttar Pradesh.Least people live in Sikkim.The highest rate of population in India is in West Bengal.Uttar Pradesh has the most number of people of 19,98,12,341.So it is the first in relation to population.Goa has only 14,58,545 people. 76,36,38,812 people out of 1,21,08,54,977 are literate people.Thus is the case of peninsular India.The beautifully naturally decorated peninsula is a country of varieties.There are so many languages,cultures,religions,festivals but the unity is unbreakable .There is really unity in diversities. This is India,the glorious rich land.