Under trump oversight, our democracy is failing. From sexism to racism and supporting dictators

April 6th, 2018, Jeff Session announced the zero-tolerance policy, which meant immigrants crossing illegally would not be able to seek asylum and will be criminally prosecuted ("Congressional Research Service," 2019). This policy led to children begin separated from their parents and housed in state shelters (so we think). Violating equality, accountability and individual or human rights democratic principles, the Trump administration can endanger our democracy.

The United States of America is home to people with different backgrounds, beliefs, morals, values etc. therefore treating one equally should come easy, right? The zero-tolerance policy violates this principle tremendously. According to the policy, these measures were needed to prevent criminals, and fraudulent claims for asylum ("Congressional Research Service," 2019). From my knowledge, determining any criminal or fraudulent activity, one must go before a judge and state their case. Under the zero-tolerance policy, these judgements are being predetermined, meaning our government is not treating all people as equals. Many parents were separated from their children, and many remain apart. Under the Trump administration, children in the detention facilities are being forced to sleep on the floor, have no access to daily necessities such as soap, toothbrushes etc. (Ramos, 2018). It seems the Trump administration is failing our democracy by trying to dehumanize people that is not of a culture. Being a black woman, I can’t help but be concerned about my welfare in America.

United Nations (UN) is to protect human rights, and that the Commission was entrusted with promoting respect for human rights globally, fostering international cooperation in human rights, responding to violations in specific countries and assisting countries in building their human rights capacity (Scannella, 2007). The United States involvement in the council came during the Obama administration, in hopes to influence more effective measures for human rights (Galbraith, 2018). The UN Human Right Council had concerns over the zero-tolerance policy and was addressing the violations in our government. After the allegations the Trump administration withdrew from the council but did not connect the reason with the criticism (Galbraith, 2018). One can assume the treatment of people crossing our border as unhuman, unfair or cruel. This clearly is in violation of not only the UN Human Rights Council but the Induvial or Human Right democratic principle. Under this principle, all humans are to be treated with respect, and human dignity. In reading the conditions of the detention centers that house separated children, the UN had reason to address concern. According to Galbraith (2018), the United States withdrew because the council allowed human rights abuses to have membership. According to the Trump administration, they plan to continue to uphold protection of human rights, but an estimated of 3,000 children were separated from their parents and force to live in unhealthy conditions ("Congressional Research Service," 2019). Sarah Fabian, a Justice Department lawyer, was questioned by federal judges about the Trump administration not providing soap or toothbrushes for migrant children in the 9th circuit court (Fernandez, 2019). After witnessing this testimony, Ms. Fabian was not directly stating but indirectly stating the children did not require daily necessities. The argument about safe and sanitation, did not include toothbrushes, soap or blankets. It was stated the children was only there for a short time stay, which still raises concern because most people do brush their teeth daily (sometimes twice a day), take baths or showers and sleep under blankets (Fernandez, 2019). When we prosecute criminals and they are in custody, they are provided with these necessities. After this hearing it seems the Trump administration views the children in these detention centers lower than criminals in prison. The question that is being asked now is to be held accountable?

Under this principle, officials are to be accountable for their actions and make decision based on the wishes of the people not for personal gain. The Trump administration has yet to accept blame for the outcome of the zero-tolerance policy. Trump instead placed blame of the Obama administration, which was quickly proven false (Cummings, 2019). Under this administration, our democracy is failing the people and will continue if action is not taken. In my opinion, this crisis at the border is everybody responsibility and citizen participation are in desperate need. As a citizen, I too feel accountable for this unhuman treatment of innocent children. How can we have a true democracy, when the officials in office are not accepting their own mistakes.

The United States democracy has standards created from our four fathers. Today we are failing their rules which endangers not only immigrants seeking asylum but citizens from different cultures. Witnessing how easy it is to influence our democracy to go against the democratic principles, scares me even more. If change does not occur, the United States of America is DOOMED! 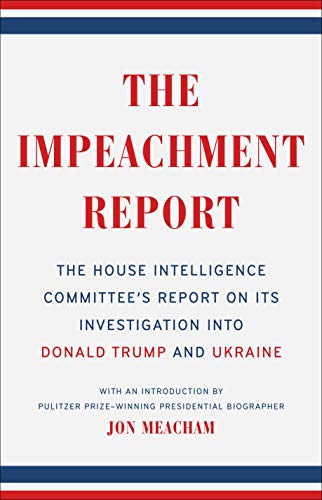 The Impeachment Report: The House Intelligence Committee's Report on Its Investigation into Donald Trump and Ukraine
Buy Now